Now and then, a movie comes along that prompts its audience to ask, “what the fuck?” Or probably more often, “WTF?” Generally, these flicks are independent ventures. They also use strange or creative techniques to tell their stories or uniquely define some aspect of a character. Recently, Shudder offered up writer/director Michael Reich’s She’s Allergic to Cats, which fast garnered a reputation as one of those WTF films. I don’t see it this way.

Starring Mike Pinkney as himself and Sonja Kinski as his fresh flame Cora, She’s Allergic to Cats tells the story of a lonely Hollywood dog groomer. Mike, the groomer, is also a “video artist” who creates by using VHS era-style equipment and whose biggest dream is to make a cat version of Brian De Palma’s 1976 Stephen King adaptation Carrie.

Unfortunately, Mike is a bit of a loser who probably identifies more with the King character than he realizes. He believes in his art and dream, but he often gets dismissed by others. He doesn’t have the confidence to back up his project with his would-be producer. Mike compares his life to people who have overcome obstacles, are pursuing their dreams, or are more endowed with success. He chronically disappoints his boss at the pet grooming shop. He fails to stand up to his street singer landlord over the infestation of rats in his home. Said rats have completely devoured his bowl of bananas and left droppings everywhere. They have even eaten a hole in his bottle of laundry detergent.

Everyone Mike looks to for help in any area of his life refuses to come through for him. That is, until the day he meets dog grooming client Cora and scores a date.

As a story, She’s Allergic to Cats is relatively straightforward from this point. The prospect of romance lights a fire under Mike to deal with his rat problem before lovely Cora comes calling. When he learns that a cat is spending the weekend caged at work, the solution to his infestation becomes apparent. However, Mike unwittingly creates a new issue by bringing the feline pest controller home with him on date night. 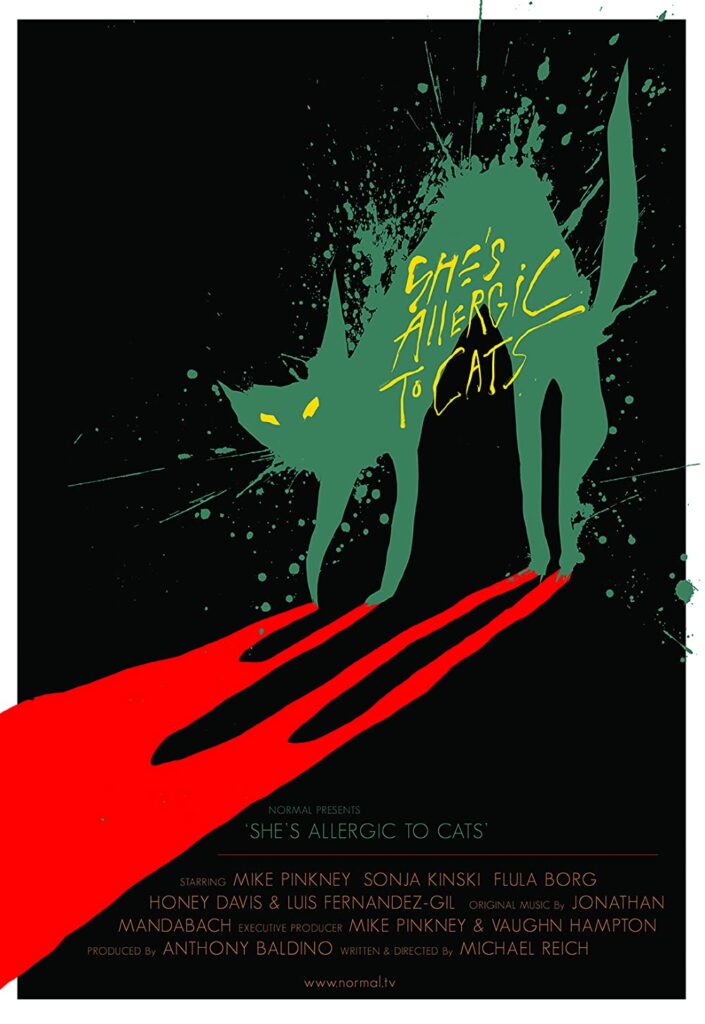 So why does this movie prompt a WTF reaction from some audiences? I suppose because of the frequent literal use of Mike’s video art to represent his inner monologue. These typically brief interludes feature flashes of images from Mike’s experiences, imagination, and stream of consciousness. They appear in a glitchy VHS style similar to his art. Often, we hear his narrated thoughts as we see them flash on the screen as both words and imagery. It makes sense for the character to think this way, given his creative nature and his method of expressing it. Fair warning: these scenes go strobe as the movie progresses. People with sensitivities to rapid flashing lights should be aware.

In addition, some folks might take the deadpan delivery of the dialogue as an indication of amateur acting or direction. It’s not. Among other things, She’s Allergic to Cats is a dark comedy. The emotionless acting appears to be an intentional underscoring of its place in that genre. It also makes sense for the story because Mike spends most of it simply existing. He wanders from task to task every day in the thick fog of his humdrum life. The two other genres this movie falls into on IMDB are romance and horror. It’s that last with which much of the Shudder audience appears to disagree.

The romance in this story is obvious. The movie plays with the genre’s tropes cleverly. Lonely Mike meets Cora and thinks she might be the person who turns his life around. The problem is that he’s failing himself. The horror, on the other hand, comes mainly in the form of the rat infestation, the bizarre imagery included in much of Mike’s inner monologue, the frequent early callbacks to Stephen King’s Carrie, and the sort-of twist but mainly twisted ending.

Unfortunately, genre fans who have a narrow definition of what horror is or should be will have difficulty forgiving Shudder for adding She’s Allergic to Cats to its curation. Their reactions are similar to those of some toward Anna Biller’s The Love Witch or other fare that isn’t straight-up action-oriented monster or slasher. They’re not horror in the sense of classic 1970s and 1980s tropes. They’re also not necessarily the art films they get accused of being. If I was forced to classify the WTF level of She’s Allergic to Cats on a spectrum, I would put it somewhere less WTF than 2020’s Fried Barry but more so than Oliver Stone’s Natural Born Killers.

I argue that this movie does, indeed, belong on Shudder’s service along with its selection of traditional horror titles. You don’t have to lose life or limb to a serial killer or monster to experience horror. Sometimes, existence alone is scary enough.