Stephen King’s Riding the Bullet, a novella, is the first ebook I ever read. King released it in that format in March of 2000 when he was experimenting with early ebook formats. Back then, an ebook was essentially a secured PDF that required a computer and a special reader application. King’s experimentations with the format continued that same year with the serialized release of a novel titled The Plant. Payment for the novel relied on an honor system. King promised he would finish releasing the serial if more than 75 percent of people who downloaded them paid $1 per installment.

Unfortunately, the 75 percent goal was too high for all but the first and third installments, and King never finished releasing the novel. However, he made more than half a million dollars from the experiment. The six installments that were released can still be downloaded from his website for free.

Contemporary news about the experiment claimed that King proved that ebooks were no threat to big publishers. Nevertheless, ebooks eventually captured a significant segment of the reading public with the release of Amazon’s first Kindle in 2007, not to mention the vast expansion of independent publishing made possible by technological leaps since. Three years before all that (and independent from it), writer/director Mick Garris released a film adaptation of Riding the Bullet. I finally watched that adaptation on Tubi earlier this week. 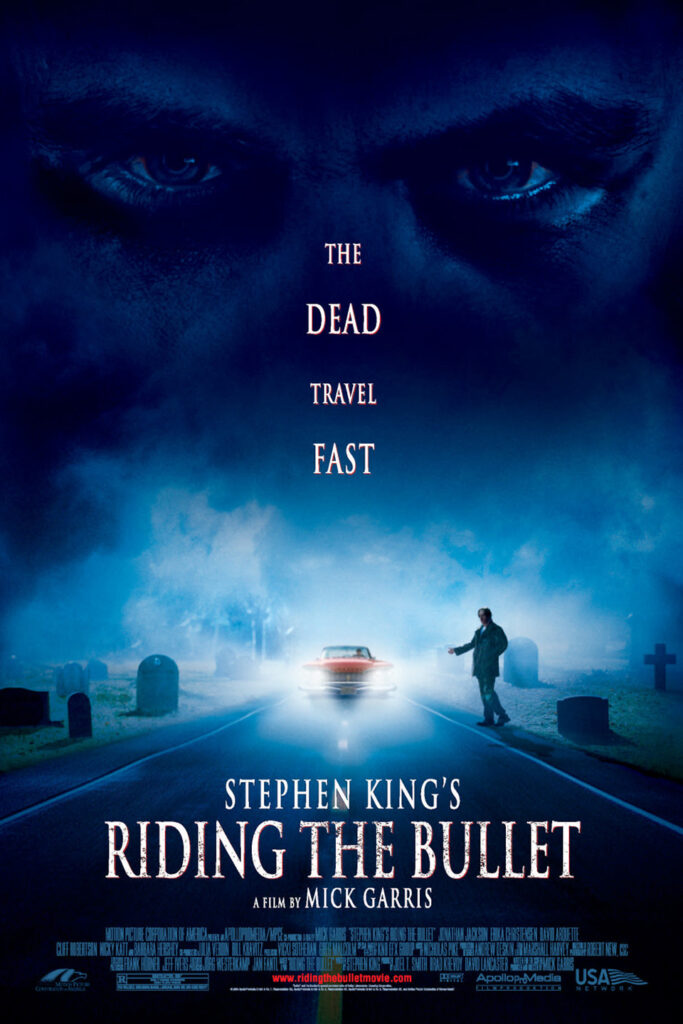 I can’t say for sure what took me so long to get around to seeing Garris’s adaptation. I’m a fan of The Stand and Stephen King’s The Shining. I enjoyed Sleepwalkers. It thrilled me when Garris brought one of my favorite King novels, Bag of Bones, to the small screen in 2011. But King’s first ebook failed to make an impression on me when I read it in 2000. I never bothered to see the film. I regret that now.

Going into Garris’s adaptation without remembering much about the novella, I wasn’t sure what to expect. Through interviews and his Post Mortem with Mick Garris podcast, I knew that Garris had modified elements of Riding the Bullet for the film to fit a more personal narrative for him. I also knew that Barbara Hershey and David Arquette were in it, although neither of them is the star. That role went to Jonathan Jackson, who plays college art student Alan Parker.

Alan has an obsession with darkness and death, which he is chastised for by his professor (Matt Frewer) during a life drawing session at the very beginning of the film. Although not revealed immediately, it is evident that Alan’s obsession stems, at least in part, from trauma. Said trauma frequently manifests itself as an inner voice that is embodied on-screen as a literal phantom twin.

After a fight that costs him his girlfriend, Alan learns through a phone call that his mother (Hershey) has suffered a stroke and remains hospitalized. So, Alan decides to hitchhike his way from college to his home in Lewiston, Maine, to be with her. Along the way, he must confront his trauma, the realities of life, and the secrets of death. Ultimately, he catches a ride with a stranger named George Staub (Arquette), who isn’t what he at first seems.

Because of its psychological components, Riding the Bullet comes across as much more than the early 2000s jump-scare fare it could have been, although it does have its share of such moments. Garris and company begin the story with a dream-like quality that persists to the end credits. But it’s not the obvious vaseline-on-the-lens, slow-motion scenes that many films used to indicate a dream. Riding the Bullet is a full-on waking nightmare complete with illusory outcomes driven by hypervigilance, twists, and, often, the sense of unease that comes with the anxiety of anticipating an undefined threat. A great example of that last comes when a farmer briefly picks up Alan along the way. The farmer is brilliantly portrayed by Cliff Robertson in what would come to be his second-to-last role. Modern audiences will recognize him as Ben Parker from the Sam Raimi-era Spider-Man films.

“Something’s wrong with him,” Alan’s inner voice screams at him from the backseat. Alan is simultaneously creeped out by and sympathetic to the older man throughout the ride as he watches him occasionally tug at his crotch and listens to him remember his dead wife. Now and again, he offers to drive Alan all the way to Lewiston even though it’s not the farmer’s destination. Is the older guy a creepy predator? Is he just a lonely old man trying to help a young one? Or is he some combination of them? Neither the audience nor Alan can pin it down, which is part of this movie’s brilliance. It is chock full of moments like that.

If you’ve never seen Riding the Bullet, the best advice is to go in with full knowledge that you will need your brain. It’s partially a popcorn flick. There are some tropes, some Easter-eggy King references, some cameos. Because of the way it addresses trauma and coming to terms with death, it’s also a meat-and-potatoes flick and a vastly underrated one at that. You don’t need a psychology degree to digest it and enjoy it to its full potential, but you might need to have achieved a certain number of years and amount of life experience. Even then, you might need to allow your inner voice to chew on it a bit.