Hey there, everybody! It’s been awhile since we’ve sat down and talked about the strange and unusual. Life got crazy and I might have ended up locked in a cold, damp, basement somewhere in the Midwest. I may have been up to my dangler in flood water and leeches. Hell I might have been on vacation. Whatever happened, I wasn’t here giving you good folks the goods. That changes today.

I took some serious time thinking about what I would use as my comeback movie. There were so many options that I decided to just pick one off of my “to-do” list at random. I don’t know if it was fate, The Dark Lord Satan, or just plain dumb luck but I think I picked a damn fine film for my return.

Today we will be looking into Why God Permits Evil, also known as Pig. All I can say is, goddamn it’s good to be back!

Time To Dig In!

Why God Permits Evil AKA Pig is a 1998 silent experimental film directed by Nico B. and Rozz Williams. This film moves through desert landscapes and torture chambers like a black and white fever dream. There’s a little torture, some great visuals, and a magnificent score. It’s one hell of a ride from start to finish.

This film reminds me a lot of Flowers in that the best way to figure out what is going on is to read stuff online. So, you’re in the right place. I actually watched this movie a couple times this afternoon. I watched it once, went and read some stuff about the plot, and watched it again. Having an idea of the plot really helped to pull it all together. Not knowing exactly what the fuck was going on didn’t stop me from appreciating the film though. I think that’s worth noting.

The movie starts with a killer putting a bunch of random shit into a briefcase. He loads in a deck of cards, a children’s book, a notebook, and a few other random things into the case before closing it. 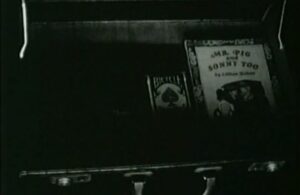 He kicks a corpse on the floor and heads out to his car . 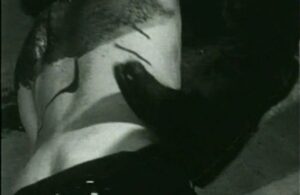 Our killer drives through the desert and picks up a shirtless man with gauze wrapped around his head. 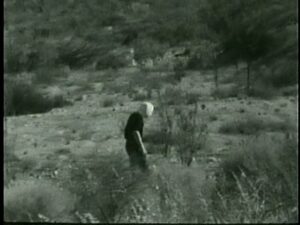 He takes the dude back to a little abandoned house in the desert and before long leads him to the basement. A killer’s basement is pretty much the last place you’d want to be. This one is no exception.

The killer empties his briefcase to reveal all manner of cutting tools and torture gear as well as a book called Why God Permits Evil. He then tortures the gauze masked victim while periodically consulting the book. 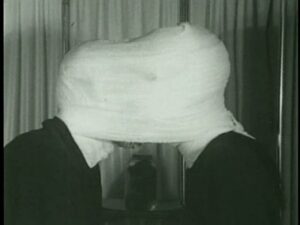 While the torture is going on, the victim slips into his imagination. This is where shit takes a turn into the weird. Let me clarify. I left normal in the dust before the first frame of this movie. Relative to the rest of the film, though, this shit is weird. Shortly after it gets super weird, the victim dies. The killer packs up his case and heads on down the road, and the movie ends.

Why God Permits Evil is not your average torture flick. Even when it gets down to the nitty gritty there is some really original stuff being done here. Honestly, this movie wasn’t what I expected it to be and I’m glad it wasn’t 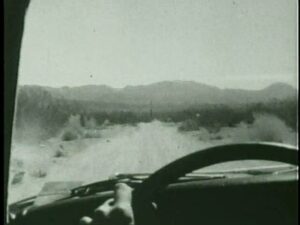 Let’s start with the overall look of the film. It’s shot in grainy black and white. Some of the shots are first person and others are just framed to cut out the face of the killer. The cinematography is beautiful throughout the film and the overall aesthetic helps add layers of atmosphere to the movie. 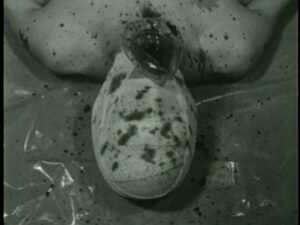 There isn’t a ton of conventional torture in this film. What’s there is pretty disturbing, though. For instance, the killer lays the victim on his back, pops a funnel in his mouth, and dumps blood down his throat. This causes some gagging and convulsing which is made somehow more effective by the fact that this is a silent film.  We also get some sewing needle nipple piercing and a little bit of cock torture before the subject expires. 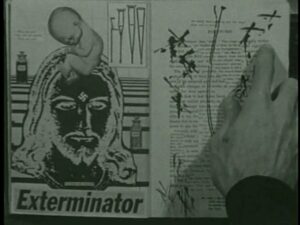 One of my favorite visual aspects of the film is the book titled Why God Permits Evil. It is full of crazy imagery and some religious quotes. The killer consults it between stages of torture so I assume that it is something of a guide book. The fact that it is such a big part of the torture makes it all seem more ritualistic. If there’s one thing that I like more than torture, it’s ritualistic torture.

I don’t know how many of you guys are familiar with silent films. They’re usually accompanied by a score. There’s just no sound coming from what you’re seeing on the screen. If you’ve never watched a silent film before, I highly recommend watching the 1922 Nosferatu. When I say highly recommend, I mean that you get high and watch it with some friends. It’s more fun that way. Anyway, Why God Permits Evil has a pretty wicked score.

While most older silent flicks are set to mood-appropriate piano or orchestral music, this one is a little different. The score to Why God Permits Evil sounds like it is made up of radio static from the German region of Hell. If someone were to put their radio dial and drive through German Hell, I’m pretty sure it would sound exactly like the score to this film. If I could find a digital copy of the score I would totally listen to it while writing or summoning demons from the void.

All in all, would I recommend this film? Yeah I would! It’s a short film so even if you don’t like it, you’ve only lost twenty minutes or so. Why God Permits Evil manages to be disturbing, gritty, and beautiful in its own dark way. It’s not super gory but it might still fuck with your head a little bit. If you’re in the mood for something a little different, go find this film and see if you can figure out Why God Permits Evil.