Saint Bernard follows a classical musical conductor (appropriately named Bernard) who unravels into the abyss of insanity through a journey made of hallucinatory visions, disturbing images, dark themes and pure madness.

Saint Bernard can be explained by one simple word “unique”. As opposed to being a dialogue heavy affair, it leads more to surrealistic styling as the “what the fuck” moments persist through the entirety of its run time. Ben Franklin, Abraham Lincoln and Andrew Jackson make an appearance in a scene where they are shoving and yelling at one another. The context may surround the idea that money is a never ending battle in regards to power. But who really knows, as this movie is so far into space that it’s on a level playing field as the ‘Spirit’ Land Rover that is currently roaming Mars. Displayed many times on the streets of New York, Saint Bernard is either the nightmare of a blue collar American drowned by the inability to follow their dreams, or it could just be complete randomness.  The acting is rather well done and one of the highlights of the film. The imagery can be excitingly unusual at times and the film is a build up to the very strange and unique ending. Arthouse film fans, this ones for you. 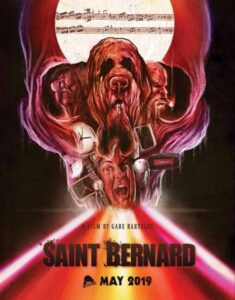