Now and then, you have to go back to basics. Maybe you’ve opted for a T-shirt and jeans in lieu of business casual for the day’s wardrobe. Or maybe you’re Eon Productions coming off the last Pierce Brosnan Bond outing and you realize that CGI kitesurfing on a tsunami doesn’t ring true of the British agent as much as an Aston Martin secret compartment that contains an antidote to whatever the poison is that the bad guy just dropped in your drink.

In terms of horror movies, audiences are often treated to resets like that because of the vast number of independent filmmakers who delve into the genre. Night of the Living Dead contained no computer-generated blood splatter, but captivates audiences to this day. Similarly, Rod Serling’s The Twilight Zone on multiple occasions made its audience believe that dolls and puppets could magically come to life, all with practical effects and brilliant storytelling.

Director Cuyle Carvin’s new horror film Dolls very much comes off as a back-to-basics movie full of mystery, suspense, and scares. Similar to Child’s Play and episodes of The Twilight Zone before it, the audience is asked to believe that a trio of creepy looking dolls in a dead woman’s house have been inhabited and brought to life by evil entities bent on murder. Cuyle and company handle the task with aplomb.

The film’s story is a throwback to many a classic horror tale, full of instantly recognizable horror tropes. A struggling children’s book author/illustrator Robert (Thomas Downey) and his daughter Sammey (Trinity Simpson) move into the house that Robert just inherited from his dead psychologist mother Edna (Melinda DeKay). Robert is an alcoholic whose marriage has broken up. His daughter Sammey, who suffers from her own psychological issues and has recently gone off her medication, blames her mother for breaking up the family and has determined that she’s going to stay with her dad instead. Soon after moving in, Robert discovers the dolls and decides to center his next children’s book around them. He next introduces them to Sammey, who notices that they sometimes seem to move around on their own.

Sammey’s burgeoning skittishness around the dolls gets validated later on by Margaret (Dee Wallace), the mother of a former patient of Edna’s. Margaret’s son suffered from what psychologists originally thought was dissociative identity disorder. As part of his treatment, Edna presented Margaret’s son with the three creepy dolls and a ceremony in which she transfers the personalities from Margaret’s son into the dolls. It turns out that Margaret’s son was actually possessed by three evil entities who have now been transferred to the dolls. 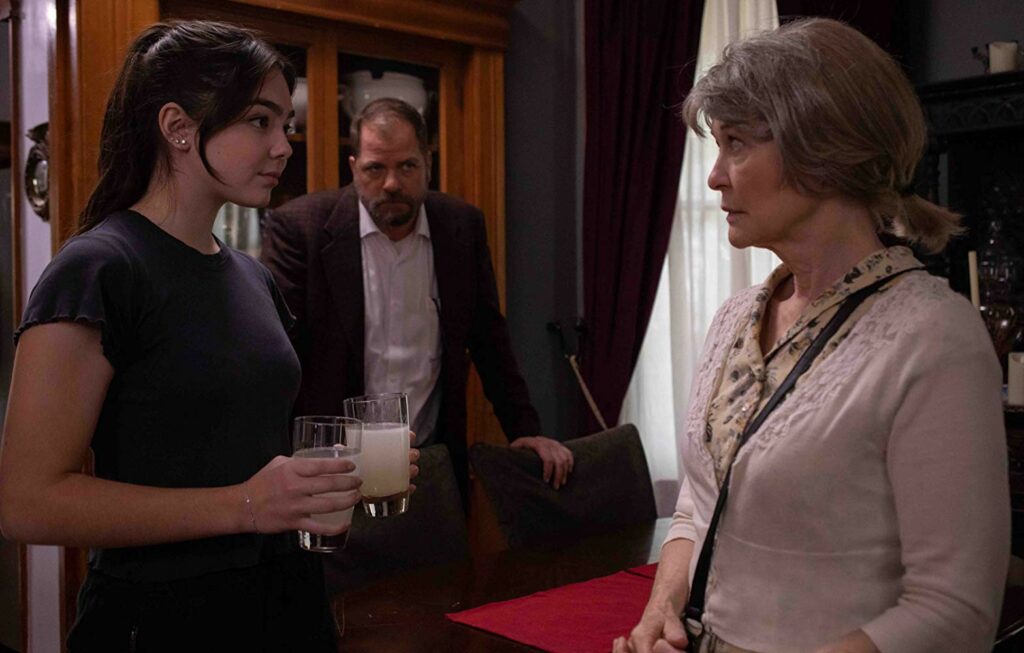 Margaret (Dee Wallace) tries to warn Sammey (Trinity Simpson) and Robert (Thomas Downey) about the danger that lurks in their new home.

From there Carvin and writers Justin Hawkins, Josh Hawkins, and Jeff Miller manage to ratchet up the tension, surprise the audience with some character developments, and make you jump out of your skin with some well-timed scares, all within a single house setting and apparently minimal use of CGI (there are a couple of shots when one of the dolls stretches his face into an evil grin that were most likely computer animated, but still effective). Another impressive feat is the filmmakers’ use of horror icon Wallace. Many indie filmmakers who manage to obtain a recognizable name choose to top-bill that name for little more than a 10-second appearance. Dolls not only appropriately credits Wallace, but makes the most of her abilities and time. When Wallace is on-screen in this movie, you’re watching a broken mother who is mourning her son and trying to warn a new family that they’re in danger. She’s not just a name there to deliver lines so the filmmakers can add a trophy to their credits list. It’s important to note here that Downey also has a long list of horror credits, although his Twitter bio points out that you’ve probably never heard of him.

Overall, Dolls is a fun and creepy ride through haunted doll territory. There’s an ending entirely worthy of The Twilight Zone and, in spite of the tropes throughout the rest of the story, not entirely expected. Dolls arrives July 2.