I don’t know if you guys have picked up on it or not but watching fucked up movies isn’t just a once a week thing for me. Lately, I’ve been watching a bunch of heavy shit. That’s all fine and good but sometimes a guy just needs to relax a little. When I need to relax, there’s no better way to do It than to get a proper buzz and take a trip down to my favorite vacation destination: Tromaville.

Some people think that Mouse-managed cattle farm of capitalism is the happiest place on earth. I beg to fucking differ. There is no place like Tromaville. It’s a magical place where women’s shirts don’t stay on for long and all the deaths are satisfyingly gory. Hell, I may just pull up stakes and move there one of these days.

So, without further adieu let’s dig into the classic musical love story Poultrygeist: Night of the Chicken Dead!!

Poultrygeist follows Arbie as he starts his career at American Chicken Bunker in hopes of winning back his high school sweetheart, Wendy. They were deeply in love until Wendy went away to college and became a vegan lesbian protestor. Tensions build between Arbie and his ex’s new squeeze, Micki but that’s the least of Arbie’s worries. The angry spirits of dead chickens and Native Americans are rising up to take revenge on the fast food chain. Chaos ensues, songs are sung, and eggs are laid.

I had almost a whole paragraph planned out to describe the general vibe of Poultrygeist but honestly, that’s not necessary. It’s a musical featuring zombie chicken demons directed by Lloyd Kaufman. If that isn’t enough to bring you up to speed you should spend more time in Tromaville. 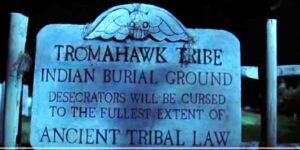 The film opens with Arbie, the best dry humper in high school, and his girlfriend Wendy rubbing crotches in an Indian burial ground. When they finally decide to go from dry humping to full on aardvarking, a bunch of hands come up out of the ground. These hands give off some real Weinstein vibes for awhile before ringing Arbie’s doorbell. Arbie likes the feeling of undead digits in his dirt box that he takes a play out of Mr. T’s handbook; he clenches up his butt cheeks and rips the finger off.

The happy couple is interrupted by a creeper with an ax in one hand and his dick in the other and flee into the night.

One college semester later, the burial ground has been bulldozed to put up an American Chicken Bunker restaurant. Arbie wonders upon the chateau de chicken looking to relive the magic of that night with Wendy, who is back from college. He finds the chicken joint surrounded by protestors. This is when he sees Wendy among the crowd making out with a dark haired girl.

The girl is Micki, Wendy’s new girlfriend, Arbie learns. He also learns that getting punched in the nose by his ex’s girlfriend hurts on several levels. His spirit is not broken, though. He knows that if he works at the American Chicken Bunker, Wendy would come back to him. Slinging chicken sandwiches was to be Arbie’s road back to Wendy’s breasts and thighs. I don’t get the logic either but I’ll be goddamned if it didn’t work.

For most dudes, getting punched in the snozz by your ex’s new flame then being told to wear a skirt all day would be the lowest point in their week at the very least. For Arbie, though it’s just the tip of the iceberg. Things get worse pretty quickly. Coworkers die, customers explode in waves of shit, and that’s all before the zombies show up.

An employee dies and in doing so sprays multiple buckets of chicken with his blood and green demon slime. When that chicken is then consumed by the crowd of protestors, they become violent chicken zombies hell bent on killing humans. Wendy, Micki, and Arbie have to work together with two of Arbie’s coworkers and fight against the feathered undead to save humanity.

Wait, This is a Musical?

Gonna level with you, Dear Reader, I didn’t know this was a musical. I saw that it was a Kaufman-directed Troma flick about zombie chickens and didn’t need any more information. Around the middle of the second song, I caught on to what was happening. I wasn’t unhappy about it, just a little surprised.

Honestly, I really liked the songs. They were funny as hell and really well done. The singers have great voices and the choreography around the songs was solid.

This might surprise you, but I dig the odd musical The Sound of Music is a great film and I thoroughly enjoyed Anna and the Apocalypse and a few others. You know what I didn’t like? The Beauty and the Beast live-action remake. Poultrygeist: Night of the Chicken Dead has better singing than a fucking Disney film. Poultrygeist is a better musical than the Beauty and the Beast remake. Suck it, Disney.

It’s fairly common knowledge that Lloyd Kaufman wanted to work on Broadway musicals before he started doing film. While I think film in general would be worse off for his absence, could you imagine how much cooler Broadway would be with a little bit of Lloyd’s weird genius? Just think, in another version of this simulation, in a wholly different but eerily similar world, Lloyd Kaufman went on to disrupt Broadway and some stuffy dickhole is at the helm of Troma. Another Yeti is almost certainly writing the bizzaro world version of this review right now.

Holy fucking shit, these zombies are rad. They’re that crazy blend of zombies and demons like in Demons and the timeless horror classic Demon Wind (howdy, Wes!). They make chicken puns while literally butchering humans. They infect people and make them lay eggs out of their nipples. Well, the eggs come from any orifice really. It gets pretty fucking gnarly as soon as the horde breaches the chicken shack. 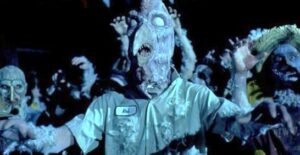 Employees of the Month

You can’t build a grand musical love story on chicken zombies alone. Poultrygeist has some great characters. From Paco Bell, the gay Mexican cook to Carl Jr., the chicken fucking inbred redneck to Hummus, the Muslim woman who is revealed to be a blonde bombshell suicide bomber this flick has offers a great variety. 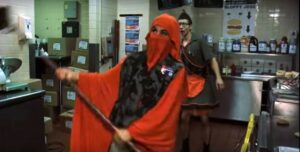 Paco Bell at his finest. Yes, he’s a talking sandwich.

The overseer of the chicken biz is General Lee Roy. He’s pretty much Troma’s answer to The Colonel. The General may not be my favorite character in the film but he does say one of my favorite lines, “Like my granddaddy said, ‘Get over here with them matches, boy. This cross ain’t gonna burn itself!’”. I haven’t laughed that hard at a one-liner in a long time. I feel like it really sums up the Blazing Saddles-esque humor of the entire film.

While we’re talking about characters that get really cool scenes, I would be remiss not to mention Lloyd Kaufman’s role. He plays a time traveling “Mature Arbie” coming back to tell his young self to get his shit together. He does all this while wearing a skirt, singing, and dancing.

Did I mention how fucking cool this movie is?

I know I touched on it already, but I love the sense of humor this flick has. It takes shots at everyone. It really is a throwback to the kind of humor that was pervasive in the works of Mel Brooks. The jokes aren’t “safe” nothing has been sanitized, and no group is safe. If this were an older film it would be one that I would say, “You’d never get that movie made today,” but this is from 2006. It’s a shining example of how the folks at Troma aren’t concerned with playing it safe but only with making entertaining films.

At the same time, Poultrygeist isn’t just packed with edgy jokes for the sake of being edgy. Like with plenty of other Troma releases, there is a hefty helping of social commentary. This flick really walks the line between smart subversive humor and giant chicken dick jokes. Honestly, I wouldn’t want it any other way.

All in all, would I recommend Poultrygeist: Night of the Chicken Dead? You bet your special herbs and spices I would! I got everything out of my little trip to Tromaville that I needed. If you haven’t visited in awhile I urge you to do so! The water might be full of toxic waste, but the chicken there is good for the soul.