This one went from being posted late Friday night to, “Fuck me, it’s Monday and I still haven’t finished the review for Friday. So, here we are. It’s Monday evening and we’re all wondering where the hell the weekend got off to so quickly. I can’t help you with that question but I damned sure point you in the right direction of one hell of a movie.

This review will have a few spoilers in it but I won’t spoil the end. So, with that being said…

On With the Show!

A Record of Sweet Murder is a Japanese/South Korean found footage film that centers on a South Korean reporter, Soyeon and her Japanese cameraman, Tashiro. The two are summoned to an abandoned apartment building by Soyeon’s childhood friend Sangjoon. Sangjoon isn’t just an old pal on wanting to reconnect after a few years. Oh no, nothing like that. Sangjoon is a wanted serial killer with a total body count of 25 and a goal of 27. He is on a divine mission to kill 27 people to bring his and Soyeon’s other childhood friend, Yoonjin back from the dead. The pair of intrepid journalists are there to witness his final kills and their aftermath.

We open with the journalists in an alleyway near the abandoned apartment building. This whole outdoor sequence looks like a good place to get jumped by raiders or super mutants or something.

Hope she packed a couple Stimpaks

It definitely not the touristy district of Seoul, that’s for damned sure. In this dystopian setting, Soyeon lays the groundwork for the plot.

She explains to the cameraman why they are there and how it came to be that he was there. She tells him that her friend is both wanted and possibly unstable. He demanded that she bring along a Japanese cameraman and no one else. They then make their way to the apartment building which looks like a great place to get attacked by feral ghouls and radroaches. 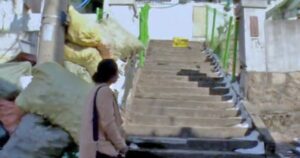 The location looks like something out of Fallout is what I’m getting at here. It’s pretty bad.

After entering the building, the pair are greeted by an aggressive knife-wielding Sangjoon. He forces them into an apartment and sits the both in chairs. They make with pleasantries. Well, as many pleasantries as you can make with a madman waving a giant kitchen knife around like it’s what all the cool kids are doing, anyway. 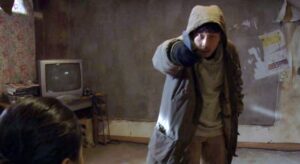 “If you stop recording, I kill you. If you miss anything I kill you.”

Then, Sangjoon lays out his master plan. This plan starts with a video.

He turns the video on an old TV and asks Soyeon if she remembers it. Of course she remembers it! The video is the one that Sangjoon was shooting while they and Yoonjin were playing in an alleyway.  This might have been mundane except for the fact that it was taken the day Yoonjin was rundown by a car. The video, of course, ends with ten year old Yoonjin being absolutely shitmixed by a midsized sedan.

“…and then Yoonjin bought her ticket to Destination Fucked!”

Through a conversation between Soyeon and Sangjoon that shortly after witnessing Yoonjin’s death he started hearing voices. His parents sent him to an institution but the voices only became louder and more concise on what they wanted. The divine voice tells Sangjoon that when he turns 27 he has to kill 27 people and afterward Yoonjin will come back to life. But wait! There’s more! If he kills all the people not only will Yoonjin come back, so will everyone he killed.

As time in the apartment wears on, Sangjoon talks about how the voices would tell him where to go, who to kill, how to do it, what to do with the bodies, and where to hide himself. At this point you really start to wonder if this truly the ravings of a wack job or if there’s something to this whole divine mission thing. This movie keeps you guessing on that front to the very end.

You Have what in the Where, Now?

After a bit of tension we realize that Sangjoon isn’t about to off his only hope for news coverage. He, in fact, has a couple of folks tied up in the other room. Could you imagine the mixture of terror and relief there? Like, you’re not going to die but you are about to basically make a snuff film. I guess you have to take your wins where you can get them.

Through some really fucking cool exposition we learn a little more about Sangjoon’s voices. It start to seem like there is really something going on there that can’t be dismissed. Soyeon stay skeptical but the cameraman starts to believe. He has seen a bunch of crazy paranormal shit and is more apt to believe that there is more than coincidence to what is happening.

At the appointed time, a Japanese couple enters the apartment building and wonders straight into the room where Sangjoon and company are hiding. 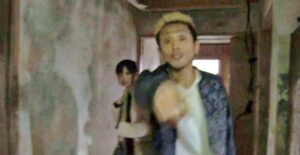 This is where the film explodes into violence. The thing is, these aren’t your average honeymooning tourists. The Japanese couple is young, very much in love, and have a violent streak a mile wide. For over thirty minutes the fight rages on between the young couple and Sangjoon, Soyeon, and Tashiro.

The action goes from explosive violence to threats and tension that builds to another explosion time and time again. I don’t want to share too much about how this plays out but I will say that it’s not just violence for violence’s sake. The narrative moves through the attacks and tension. Characters change and grow in that short period of time and we are all along for the ride. 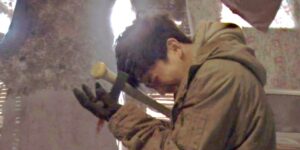 All of the action leads up to the final scenes that we won’t discuss here. All I want to say about the ending of A Record of Sweet Murder is that it is unexpected, it answers all the questions, and I fucking loved it and just about everything else about this film.

A Record of Sweet Murder is one of the best-looking found footage flicks I’ve seen in awhile. According to the narrative, Tashiro is an experienced cameraman and it really works with how the final product looks. There isn’t a ton of shaky cam and many of the shots are really well framed. The lighting walks the line in showing how dark and destitute the apartment is while not being so dark that you can’t see what the fuck is happening.

I may have made jokes about the location earlier but it works. The rundown abandoned building is the perfect place for this movie to take place. The outside of the building looks like somewhere you would go to get violently killed and the inside is more of the same.

While the violence is explosive, graphic, and unrelenting at times the practical effects used in A Record of Sweet Murder aren’t over the top. The effects lean more toward realism which, in a way, helps to add to the overall feeling of dread and tension in the movie. This would have been the perfect film to bring out the big buckets of blood and tubs full of guts. It could have been an absolute fucking bloodbath. Instead of gore, though, A Record of Sweet Murder’s strength is its realism and atmosphere.

Let’s Have a Chat about Sangjoon

Sangjoon, the reluctant murderer and possible madman, is my favorite part of this film. Not because of his overt actions, or any one thing that he says but because of what he represents as a character. The character of Sangjoon presents us with a few things that I really love to see: a possibly descent into madness, a sympathetic killer, and the question of whether he is insane or touched by some divine power.

While his body count is high and only getting higher, Sangjoon takes no joy in what he does. Every act of violence is an inner struggle for him. It is a struggle between the good person that he knows himself to be and the divine plan that he must follow. Even though he firmly believes that all lives that he takes will be returned, Sangjoon does not do what he does lightly. Even as he becomes more sure of what he is doing, he is not having a good time. By the end of the film, I found myself feeling for Sangjoon if not rooting for him in some way.

The other two elements are interconnected. What we are seeing is either a man losing what is left of his sanity in the space of an afternoon or a divine plan unfolding. When you take into consideration his lengthy stint in an institution and how bat shit crazy he sounds, it seems like he’s obviously losing his mind. However, coincidences seem to say otherwise. It’s a beautiful pairing that really helps to drive not only the progression of the character but also the overall narrative. If Sangjoon wasn’t such a perfect storm of madness, mystery, and remorse this film would not have been half as good as it is.

The one complaint that I have about this film is the subtitles.  In several scenes, the subtitles are early by a few seconds. This doesn’t seem like a huge deal until you’re witnessing a heated exchange between Sangjoon, Tashiro, and one of the victims. It isn’t impossible to follow it just really took me out of the moment. It was enough to make me bitch about it but not bad enough to really change my opinion on the overall film.

All in all, would I recommend A Record of Sweet Murder? Abso-fucking-lutely. If you’re a fan of brutal and visceral horror films from Asia, you need to check this movie out. Unearthed Films has recently picked this up for distribution and you can pick up a copy of the Blu-Ray here. You won’t be disappointed.