I don’t discriminate when it comes to horror flicks. From haunted houses to home invasions and beyond, I’m on board. If I really want to feel something, I tend to stick to something that hangs somewhere around the realm of possibility. Flicks that feature human monsters doing horrible shit usually get my blood pumping. The movie we’re looking at today takes that shit to a whole new level. This is stuff that actually happened. That’s right. This week on Fucked up Friday, we’re looking at the infamous Men Behind the Sun!

We’ll do a quick yadda yadda on the plot and then move into what makes this film so important and effective. This one is a real fucking doozy, folks.

Men Behind the Sun follows a group of young Japanese boys who were conscripted into the Youth Corps. Their group was assigned to the infamous Unit 731. This was a unit ran by the sadistic Surgeon General Shiro Ishii. The sole purpose of the facility to which the boys are assigned is to develop a weaponized version of the bubonic plague for the Japanese army.

What the boys find is a facility where abhorrent experiments are carried out on Chinese and Soviet captives. While the Youth Corps tries to acclimate to their new assignment, they simply can’t get past the inhumane things that they are forced to witness.

While trying to cope with their plight in life, the boys end up making friends with a mute Chinese boy. They meet him in the forest outside the camp and spend time playing games of catch with him. They take every moment they can to just be children for awhile. Their humanity overtakes their cult-like training when the superiors order the boys to bring them the Chinese kid. They claim that he’ll be undergoing a harmless operation but they end up dissecting him alive.

Shortly after this betrayal, the boys come together to strike back. They attack their superior with two by fours and give him about a tenth of the beating he deserves. This turning point coincides with another turn of events for the Japanese army. Russia declares war on Japan and America drops nukes on Hiroshima and Nagasaki. 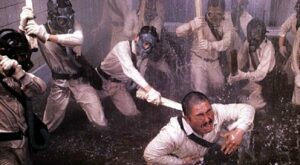 Knowing that the fate of The Empire is sealed, Ishii commands that all evidence be destroyed, all remaining prisoners be executed, and every member of Unit 731 is to commit suicide. Cooler heads prevail and they take their data and destroy the base. The soldiers, including the Youth Corps escape China via train.

They Did What to Who?

Let’s talk about some of the more fucked up parts of this film, shall we? The experiments that these bastards are doing are beyond abhorrent. This is the kind of shit that makes me lose a little faith in humanity. 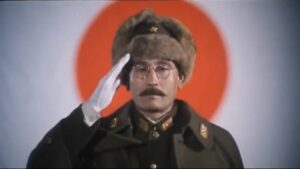 Shiro Ishii being all patriotic and shit

First of all, the superiors beat the Youth Corps until they agree that the captives are not human. They refer to them as Maruta which means “material” or “logs”. The children are then instructed to violently beat a Chinese man to show that they understand that the captives are less than human. 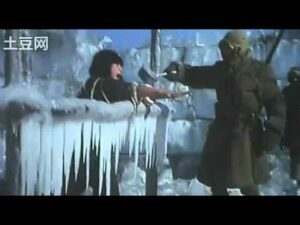 In one experiment on the ravages of cold weather, a woman is tied up outside. The temperature is -25 degrees. Her hands are tied in front of her and water is dipped from under a frozen lake and poured over her exposed skin. After she is sufficiently frostbitten, her hands are dipped in warm water before she is swiftly degloved. If you’re unfamiliar with the term, it means that the skin and meat are stripped from her hands. In this case it starts at her elbows. 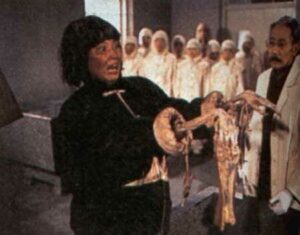 That particular woman’s trials began before she was lashed to a post and frostbitten. The Japanese soldier stripped her baby out of her arms and tossed it like garbage into the snow. They silence its cries by kicking a mound of snow over it. They leave it to freeze or suffocate in the frigid night. In both cases, the Youth Corps is forced to watch.

In another experiment, a nude Chinese man is locked in a pressure chamber. After several long moments of the pressure of the room crushing him, he collapses. In the end, the man shits out his intestines and is left, facedown, dead on the floor.

When the officers take the mute Chinese boy is where things get really fucked up. They lay him on the table, chloroform him, and cut him open. During these scenes, there is an obvious body double in use. Unlike most movies, though, this isn’t a cast made of the little boy’s body. What we watch is actual autopsy footage. The actual organs are removed from an actual dead child. It’s pretty fucking gruesome to say the least.

In the height of cruelty, the Japanese officers throw a fluffy white cat to a room full of frenzied, hungry rats. For what feels like forever, we watch the cat struggle with and then succumb to the horde of rats. The scene ends with the bloodied cat being dragged away on a scurrying sea of vermin. While the director has come out to say that the cat was not harmed, I don’t believe that shit for a second. This was genuinely hard to watch.

What’s So Special About This Movie?

The thing that makes this movie so important and effective isn’t it’s great practical effects or its brutality. It is the fact that this is a fairly accurate depiction of the level of brutality that took place in these facilities. Unit 731 was a real thing. Shiro Ishii was an actual person. These experiments and worse actually happened.

Ishii and other high ranking members of his unit were given immunity by America. In exchange, Ishii turned over the data that they collected through their experiments. The Soviets wanted them prosecuted under The Military Tribunal for the Far East, but the American government intervened. Their data was deemed incredibly valuable argely because it could have never been collected in America due to ya know, medical ethics and shit. It is even rumored that Ishii was stationed at Fort Detrick to help develop bioweapons for the US armed forces. It is further claimed that he traveled to the front during the Korean war right before biological weapons were used against America’s enemies.

Men Behind the Sun may be a gory, brutal, exploitation flick but it is definitely more than that. This is a reminder of things that many don’t even know we have forgotten. It is an example of the true darkness of humanity. This film highlights what happens when brilliant but evil men are allowed to work their will unchecked. This film is more important that you could imagine.

All in all, would I recommend this film? Absolutely. Find this movie and watch it. This and several other WWII-era films should be required watching for not just horror fans but humans in general. It’s a harrowing and visceral experience. If you’re not acclimated to things like this it might fuck your mind up a little bit but that’s kind of the point.

My only real gripe is that the DVD of this film that is widely available for fairly cheap is dubbed. I’m not one of those who thinks that dubbing foreign films is somehow racist. It’s just that the voices sound kind of goofy. At times, the dubbing takes away from the brutality of the film. Then again, that could be a positive thing for some viewers.