A lust for fame and the placement of ambition above all else has consequences. Early in this cycle, the effects arrive as distancing from family and close friends. At its peak, one suddenly finds themselves addicted to substances or other unhealthy coping mechanisms. In the end, the total might even involve the loss of life, whether the lives of others or one’s own. It’s an old story, retold often but rarely reinvented. Most recently, director Amelia Moses and writers Wendy Hill-Tout and Lowell explore the fall from the last rung of the ladder of success in the 2020 horror movie Bloodthirsty.

Beloved pop musician Grey (Lauren Beatty) struggles with what she fears is a mental breakdown featuring hallucinations of lycanthropy. After a visit to her psychiatrist Dr. Swan, played by Scanners‘s Michael Ironside, Grey restarts her medication as part of an effort to regain control. Then she receives an invitation to work with infamous producer Vaughn Daniels (Greg Bryk) on a new album. Vaughn has a history. He produced some of the biggest moneymaking records. He has a reputation for being demanding, uncompromising. Vaughn once faced murder charges in the death of his wife. He was acquitted but disowned by his industry.

Grey’s girlfriend Charlie (Katharine King So) suspects that Vaughn is indeed guilty but accompanies Grey to his remote studio in the woods anyway. Soon after work on the new album begins, Grey’s ambition grabs hold. Distance worms its way between the couple. Grey exhausts herself by working all hours for long periods. Her hallucinations worsen. Vaughn, meanwhile, convinces Grey that the medication Dr. Swan prescribed her stands in her way creatively. From there, Grey’s uphill struggle turns into a downhill tumble through all the tempting traps of fame and fortune. Ambition changes you. In Grey’s case, the changes are extreme and involve hair, claws, and teeth. 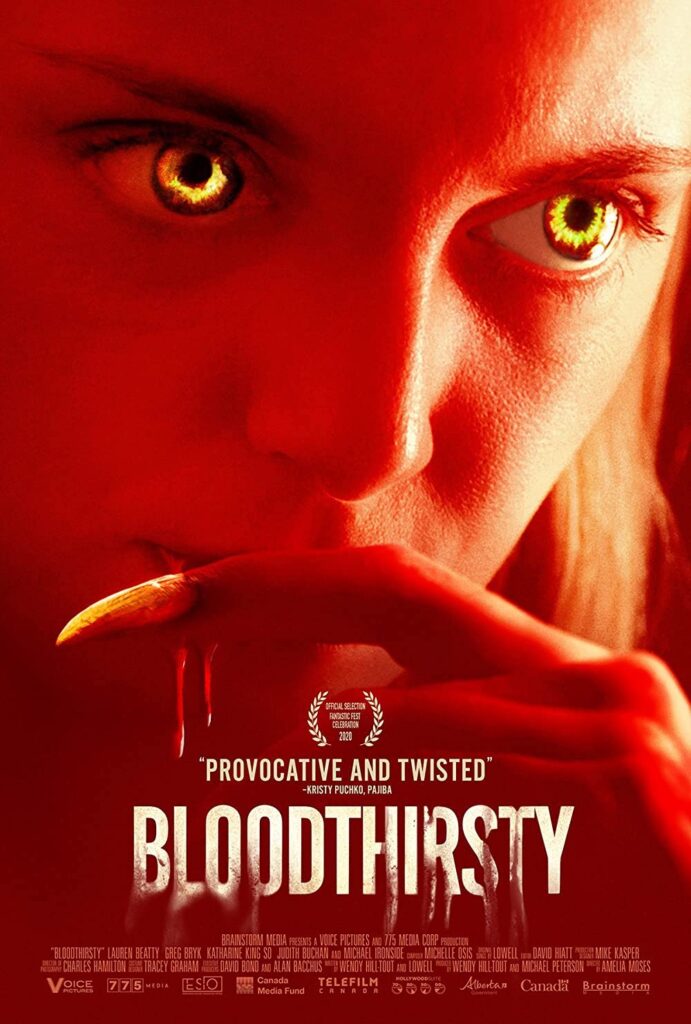 Fans of werewolf movies might find an Easter egg or two in Bloodthirsty. For example, pay attention to the destination printed on the hitchhiker’s sign. However, the filmmakers have eschewed the modern trend of playing almost exclusively to horror nostalgia to get eyeballs. For that, this viewer is grateful. Watching new horror movies that seem intended to reconnect you with genre loves of the past grows tiresome.

Some viewers label this movie a slow-burn thriller because Bloodthirsty is as much about the hazards of ambition and fame as it is about werewolves. There’s not anything about this film that is slow. It’s not full of car chases or wall-to-wall slashing with blood spatter, nor would any of those things improve the experience of watching Bloodthirsty. It is full of stories and relatable characters, even if you are not a famous musician. Combine that with a profoundly relevant soundtrack composed by Lowell and all the third-act blood and action. Altogether, you get a movie that demands and deserves your full attention. Amelia Moses and company have a classic story to tell and nothing to prove.

Ambition can be addictive and deadly. Fame is fickle and dangerous, ever-changing in phases like the moon. Together, they test who you are. Bloodthirsty might force you to question if you are who you think you are when the moon is full.