To conjure up a Hammer-style horror flick without involving Hammer, there are some key ingredients you should include. Among them are an ancient evil, magic, science, pseudo-science, and a murderer on the loose. It also doesn’t hurt to have the names Christopher Lee and Peter Cushing involved. This week, I watched 1972’s Horror Express for the first time. The Spanish-produced English-language Hammer-style flick indeed contains every ingredient of a Hammer production. In addition, it contains two of the company’s most prominent leading men.

Not having heard of this film prior to its importance to the plot of the Season 2 finale of Shudder’s Creepshow TV series, I can say this is the only horror movie I’ve ever seen that was directed by Eugenio Martín. Now that I’ve seen it, though, I want more.

The story is about rival anthropologists Prof. Saxton (Lee) and Dr. Wells (Cushing), traveling separately on the Trans-Siberian Express. Saxton carries with him his latest discovery. It is a prehistoric biped that could be the missing link in the story of human evolution. Curious about the contents of Saxton’s crate, Dr. Wells bribes a baggage man to pry it open and peek inside. Unfortunately for the poor train employee, his efforts unleash a prehistoric memory vampire on the hapless travelers. 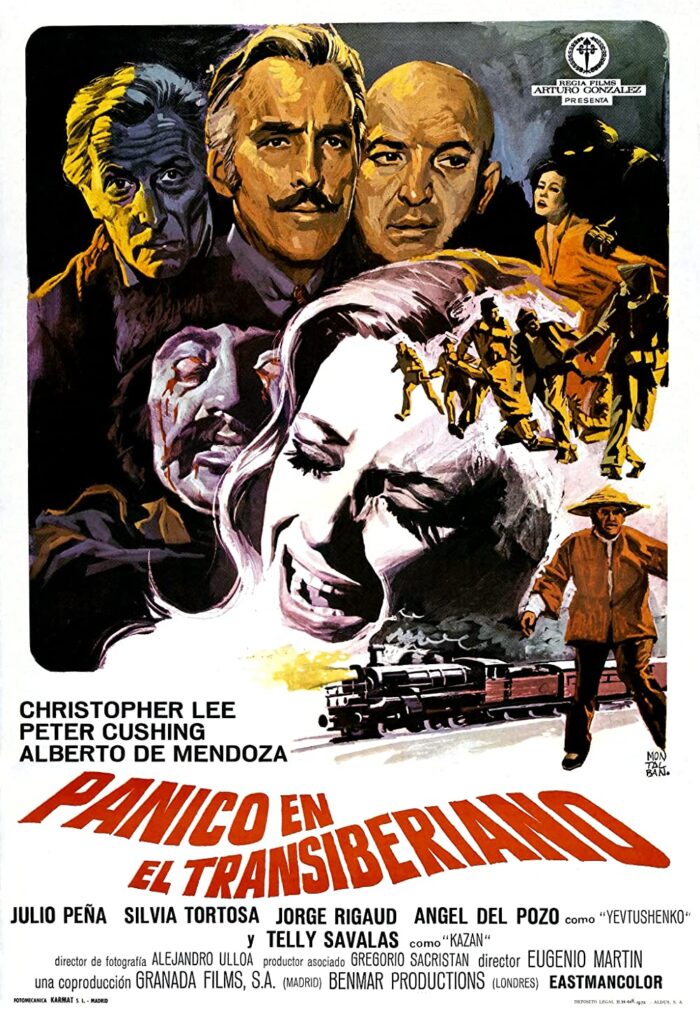 In the vein of its Hammer contemporaries, Horror Express is richly photographed and wonderfully atmospheric. It has its share of gore. The monster makeup rivals the practical effects of the big-budget horror films in the decade that followed it. It includes science versus religion versus mysticism debates that found their way into similar horror movies of the day. True to its tropes, the film’s twists and turns are easy to predict. They entertain, nonetheless. The only twist that made no sense to me was the Mad Monk Father Pujardov’s (Alberto de Mendoza) sudden conversion from zealous Christian mystic to prostrating Satan worshipper. There was no obvious catalyst for his transformation other than the presence of the prehistoric mind-wiping creature on the train.

The only other problem with Horror Express is the obvious stunt-casting of Telly Savalas as Capt. Kazan. Savalas had already played Blofeld in On Her Majesty’s Secret Service. The next year, CBS would launch his popular television detective drama Kojak. But his career had been in full swing for a decade. His character in this movie seems to exist only as a reason for Savalas to appear in the flick. It begins with his reveal (rolling over on a bunk to face the camera). It continues on the train with a made-for-whodunnit-TV scene. Dramatic pacing, pointing, and verbal deductive reasoning are the order of the day. Stars Lee and Cushing meanwhile stand in the corner looking befuddled. Aside from this bit of entertaining but Shatnerian acting, nothing Savalas does in this film advances the plot.

Neither of the issues above is a reason to avoid Horror Express if it’s on your radar. Even if you watch it because you want to see how Creepshow modified it for their Season 2 finale, it’s worth doing so.

Shudder reignited my interest in Hammer horror films by peppering some of their titles here and there. As a result, freshly discovering flicks like Twins of Evil and Vampire Circus makes me wish I could search the service by more than just film titles. Searching for a particular director’s name or a specific production company could feed this completionist’s cravings. Add to that a “Similar To” search option, for instance, and Horror Express might have landed on my radar even if I wasn’t a fan of Creepshow.

However you choose to board it, Horror Express deserves your time if you are a Hammer fan, a Lee fan, a Cushing fan, or want a fun horror mystery to kill some time.