Well, everybody, it is finally October! I’m celebrating the first day of Halloween as well as the fact that I’m officially older than Jesus! What did I do to celebrate, you may ask? Well, I got pretty intoxicated and watched something truly trashy and gory. Like, I do that pretty often but today I did it with holiday spirit. I was saving today’s movie for a special occasion and today was the day! So, Let’s talk about the 2007 horror sex comedy Goregasm.

I honestly don’t remember ever hearing about this movie until a couple weeks ago. I was hanging out in my local movie store (shout out to Southland Dungeon in Maryville.) and my pal behind the counter showed me the single copy of Goregasm they had. I didn’t need to see more than the title and the cover to know I needed the DVD. Needed it, you guys. It didn’t matter to me if it was the worst movie since Snuff I had to own it. 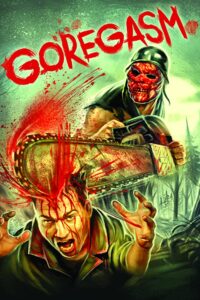 Can you blame me, though?

When we get down to it, there are two sets of main characters, the killer, a handful of secondary characters, and some victims. This works on several levels. It allows the different narratives to intertwine into a fun story. It also allows for some great comedy inside these small groups.

Then there’s the cops investigating the rash of murders. Officer Pentek (I think) and Detective Depshet. I’m having a hard time with the spelling because the IMDb for this flick is all but worthless. Anyway. These two are funny as well. Depshet is sold on the fact that the Cock Face Killer is fake and there is a Fetish Killer on the loose; he kills people for engaging in certain fetishes. Pentek, is the smarter of the two but a subordinate officer as well as a woman. Their dynamic is fucking great; time spent with either of these groups on screen is a good time.

The Cock Face Killer could also be called the Cock Block Killer. It doesn’t matter if you’re trying to fuck or rub one out really quick, if this dude finds out you’re trying to catch a nut, it’s game over for you. He comes into the room, waits until somebody gets close to getting off, and then gets down to the killing. What an absolute bastard, am I right? To make up for being such a killjoy, he pulls off some great kills. CFK uses a variety of weapons including knives, a chainsaw, and a big ass dildo. He also uses the massive cock on his chin from time to time. Overall, CFK is an incredibly fun killer.

This movie delivers on some great low budget gore. There is some CGI blood, which I fucking hate, but the great practical effects really make up for it. There’s brain stomping, eye gouging, and some full-on vaginal destruction. Seriously, if you want to see something fun and gory, you need to seek this movie out.

All in all, would I recommend this flick? You’re fucking right I would! Goregasm has everything you could want from a movie like this: good gore, plenty of laughs, and hot women in various stages of undress. If you need some grade-A trash for your Spooktober watch list, look no further than Goregasm!