Greetings, good people of the Internet! We’re a little over 24 hours into October and things are already shaping up to be pretty fucking great. If you ignore, like, most things that are going on in the world. Luckily, that’s what we’re here to do! How am I ignoring the inevitable extinction of the human race today? If you guessed “self-medicating with weird mountain roots and grave dirt”, you’d only be half right. I’m also watching cool ass movies like What the Waters Left Behind.

This is an Argentinean film originally released in 2017 under the title Los Olvidados which translates to The Forgotten. It focuses on a documentary team who travels to Villa Epecuen to make a documentary about the destruction of the city. They soon find out that they aren’t alone in the ruins of the city.

We got a screener for this flick from Unearthed Films some time ago but I somehow forgot to watch it. Luckily, I came across it again because it is just what the doctor ordered. I feel like I can count on Stephen Biro to distribute some high quality violence and gore. So, I had a pretty good feeling going into this one. So, let’s dive in. I’ll try to keep spoilers light.

The main plot of What the Waters Left Behind is pretty standard. We’ve all seen it before in flicks like Texas Chain Saw Massacre, Wrong Turn, and The Hills Have Eyes. The thing is, all of those movies are rad as fuck because it’s a cool story. So, I don’t mind seeing it unfold again especially when it’s done well.

What really hooked me here is the story of Villa Epecuen. It was a village on the shores of a big salty lake. The lake supposedly had healing properties, so the tourist trade boomed and it became a resort town. The healing lake kept rising, though, despite all the things residents of the town did to stop it. In 1985, the lake finally overtook the town, flooding it quickly and destroying everything. The water would not recede for 30 years. There’s some really cool news footage of the flood worked into the film and there is some current stuff on YouTube that I recommend checking out. The place looks like the setting of one of these horror movies.

Which is good, because What the Waters Left Behind is shot on location among the ruins of Epecuen. It looks fucking great, too. All of the exteriors, even the badass slaughterhouse, are real. The interiors are masterfully designed. To me, they were exactly what I would picture if you told me the Argentinean Sawyer family lived there.

While the characters may not be super interesting, they are entertaining. Everyone turns in a solid performance here; from the hot chick in a bikini to the retarded deformed guy in a mask, everyone plays their part to the fullest. To me, the real test of a performance in a movie like this is how well the victims sell their torment. You’ve got some serious physical and mental torture going on and if the actors seem unaffected by it all, it just doesn’t work. Luckily, everyone suffers really well on screen. It doesn’t matter if they’re weeping or screaming in agony, they sell every minute of it. 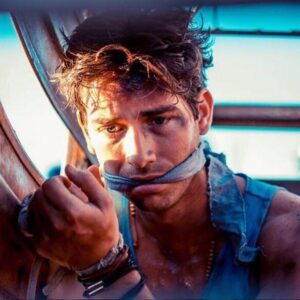 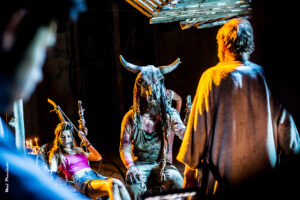 What the Waters Left Behind is a real looker. The story, characters, and performances are all solid but it’s the visuals that really pull this whole thing together. All of the exterior shots are just amazing. Not only is this film set in a salt-choked barren wasteland peppered with ruins of homes and businesses, the camera work is also really great. Even if the performances weren’t as good the combination of environment, set design, character design, and gore effects would make this movie worth watching just for the visuals. I really just can’t get over how fucking cool this place looks, though. 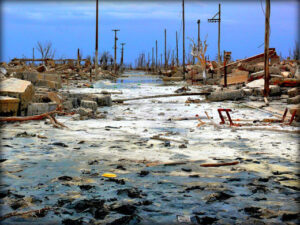 I can’t remember the last time I liked the soundtrack in a movie so much. Most of it is done by an Argentinean stoner rock back called Acido Plexippus, which I think translates to Acid Butterfly or Butterfly Acid. Plexippus is apparently a type of monarch butterfly. Look, I don’t know. It was Spanish-language stoner rock, okay? It was fucking cool. Here, check this track out. I just thought it was worth mentioning.

All in all, would I recommend What the Waters Left Behind? You’re goddamned right I would. If you dig movies like Wrong Turn, The Hills Have Eyes, or The Texas Chain Saw Massacre, I think you’ll dig this one too. It’s got good performances, beautiful women, great gore, killer atmosphere, and brings light to a really interesting natural disaster. You can watch it on Tubi or you can pick up the Unearthed Blu ray from Diabolik.