I mentioned in the review I posted yesterday that I would be watching more movies and doing more reviews. I’m hoping to help get us all into the spooky spirit a few days early. The movie I’ve got for you today really captures the spirit of the season in my opinion. Slashening: The Final Beginning is equal parts slasher and comedy. There’s plenty of blood, violence, and humor to go around.

The Beginning of The Final Beginning 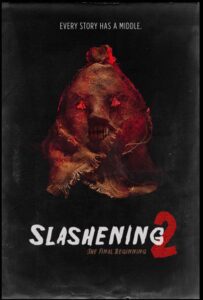 This morning, I was able to double feature both of the Slashening movies. Even if I hadn’t watched (and thoroughly enjoyed) the first film, it becomes obvious within the first ten seconds that I was in good hands with the sequel. I can’t think of a time when I saw that Troma logo pop up and didn’t have a great time watching the movie that followed.

The opening sequence features a group of friends in the house where the original massacre took place. There is some pretty good banter and tongue-in-cheek humor about sequel tropes before the masked killer shows up and unceremoniously kills everyone in the house. Between the pizza guys in the first movie and the house full of people killed before the credits in this one, this killer has one hell of a body count.

From here we move on to where the movie really kicks off. We’re introduced to a grief support group led by Pat from the first film. That poor bastard is all fucked up after his run in with the masked killer but he’s pushing on. The members of the group are the core cast for the rest of the flick.

Slashening the Final Beginning gives us a wide array of characters. There are a couple of really interesting characters. My favorites are Ben, who is grieving a murdered son and Madison who is the daughter of the owner of the pizza place in the first movie. There are also a couple of wannabe socialites; empty-headed shallow bimbo types. They’re there so you can root for the killer. Then there’s Dylan. Dylan is one of those ultra-woke male feminists who is really just in it to get laid. Everybody immediately sees through his bullshit. I love to hate that prick.

Slashening: The Final Beginning is smarter than you’d think it is. You see flicks like this and you expect them to be kind of dumb and formulaic; but in a good way. From the jokes to the plot, this movie has some serious thought put into it.

I really enjoyed the humor of this movie. It constantly takes the piss out of the ultra-woke crowd. Dylan’s constant fake feminism is a great example of that. There’s also a couple who is about to fuck but stops every few seconds to make absolutely sure that both parties are capable of consenting. At the same time, the film is pretty egalitarian. The characters are pretty diverse in terms of class, race, and orientation. There’s even a kill involving a gay couple docking their cocks. Google it. It’s cool to see a variety of people on screen without the filmmakers metaphorically screaming in my face about how inclusive and diverse the film is.

I’m not going to go into the plot on this one, because I don’t want to spoil anything. I will say that there’s a great twist that I never saw coming. Because I’ve watched so many slashers and spoofs I was pretty sure I knew where the plot was heading. Turns out, I had no fucking idea. The story that Slashening: The Final Beginning tells is more engaging and well thought out than anything you’re going to see in a theater for quite some time.

We also get a cool little cameo from Lloyd Kaufman. He plays a self-defense instructor who passes down some solid wisdom: Punch ‘em in the dick.

I bet you’re thinking, “Sure, it’s smart and funny but how are the kills?”. That’s what I would be thinking at this point, anyway. Like you were trying to sell me on your ugly friend by telling me they have a great personality or something. Honestly, the kills are fine. In these slasher spoof flicks, I don’t set a really high bar. I will say that most of the kills are onscreen and there’s no bullshit CGI blood. It never goes super gory but it spills enough blood to get the job done.

All in all, would I recommend Slashening: The Final Beginning? Goddamn right I would! It’s bloody, smart, and funny. Definitely worth adding to your watch list. It’s currently doing the rounds at some virtual festivals. If you want to get in on a live screening of it you can head over to The Milwaukee Twisted Dreams Film Festival site and get yourself some passes for the October 4th screening. It’s well worth it.