It’s damned near October and you know what that means! That’s right, the Season of Spooky is upon us! For us, that’s pretty much year-round but it’s nice to see the rest of the population getting in on the fun for about a month. It’s also some motivation for us year-round horror fans to up our game. I reckon it’s time to dig in and watch even more movies; it’s time to broaden those horror horizons. I was wondering how I was going to kick off my spooky season when we got a couple flicks from the legendary Unearthed Films. Problem solved! So, today I’ll be talking about a flick called House of Flesh Mannequins.

Really, this movie isn’t for me. It tries to balance ultra-pretentious art house and extreme horror. All I knew about this movie before watching it was that it was part of Unearthed’s Too Extreme for Mainstream imprint which has had some pretty fucking gnarly titles in the past. So, I went into this expecting a gory, violent, and disturbing film. I did get flashes of that but the bulk of the movie is conversation that feels like it was written by an alien who kind of knows how people talk.

Look, I’m sure that each one of these exchanges is packed to the brim with poetic metaphors. This movie is probably deep as fuck. It sure acts like it is. All that was lost on me, though. Lines like “Art is the lie that shows us the truth,” gave me more of a laugh than a mind altering epiphany. I don’t mind a movie that has some substance. It just seemed like every line in this film was delivered with such great weight that it all blended together. I think I was halfway in before I started making fun of the characters and yelling at the movie to get to the killing.

When it does get to the killing, it’s pretty damned good. When it isn’t cleverly obscuring the gore and violence, the practical effects are spot on. There are even some really solid makeup effects that I’ll touch on a little later. Make no mistake, this movie is more interested in hanging as much wang as possible than spilling blood and guts. If you’re looking for deep metaphors, brief gory scenes, and a whole bunch of dick in all stages from flaccid to spurting, House of Flesh Mannequins is what you need in your life.

For all of that, I didn’t completely hate this flick. There are some really cool elements. For instance, you get title cards for the prologue, epilogue, and all three acts like an old silent film. The sets are really well constructed. In scenes where the human interaction got too boring, I found myself lost in the sets behind it all. The lighting, when it isn’t hiding the action, is pretty nice too; the reds, blues, and purples used in the lighting really spices things up. 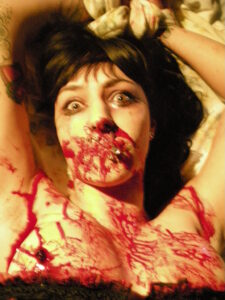 When House of Flesh Mannequins gets violent, it goes whole hog. There is a great sequence involving suspension and some breast torture featuring the incomparable Poison Rouge. The makeup effects and gore in these sequences are top notch. There’s also a nod to the end of Maniac combined with Rhodes’ death in Day of the Dead that worked really well. 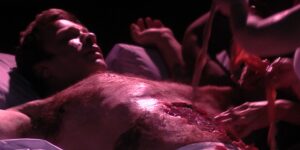 The House of Flesh Mannequins

When Sebastian wants some weird time to himself, he visits the most fucked up peep show I’ve ever seen. Each window holds a new scene of perversion for him to feast his eyes upon. A couple of them are pretty vanilla but there are some seriously strange fetishes on display. One of my favorites is the beautiful nude woman who is presumably about to fuck a guy with an extra face growing out of his head. It’s a cool juxtaposition and some nice makeup work. 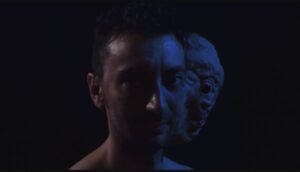 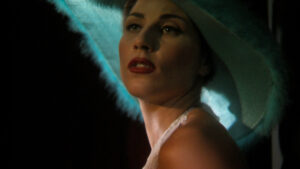 All in all, would I recommend this film. Not to anyone I know personally. I just don’t know anyone who I think would really enjoy this film. If you’re into the kind of film that the general public thinks of when they hear “arthouse”, then yeah. Especially if you like that kind of flick with a dose of blood and guts. It’s not a bad flick, I’m just not the audience for it. If you’re interested in picking up a copy Diabolik has the Blu ray with some cool extras. 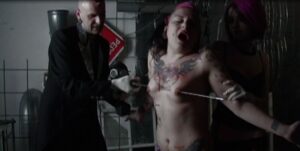