Joker really needs no introduction. The entire internet has been talking about it for what seems like weeks now. Avoiding spoilers for this fucking movie is like trying to avoid The Black Death in 14th century Europe. I won’t be giving any major spoilers here so no worries. Let’s just get into it, shall we?

Okay, unpopular opinion: I don’t like superhero movies, for the most part. I can think of two that I like off the top of my head, one of which is the 1989 Batman movie. Luckily for me, Joker isn’t a superhero movie. Oh sure, it’s a villain’s origin story but this movie has more in common with a tight psychological horror movie than The Avengers.

Joker is a beautifully crafted descent into madness. We get to see every piece of the puzzle slowly come together as the world seems to continuously shit on Arthur’s head. He pushes through and perseveres until he finally just snaps. I love stories that end in madness especially when they’re done well. Joker puts us in the mind of the man who will become Batman’s nemesis. If this is the direction of the DCEU from here on out, I will definitely be on board.

Okay, I know I said no spoilers but we all know how it ends. It’s an origin story. One of Gotham’s greatest villains rises from chaos. The way it was done, though, is what’s important. I won’t give that away but I will say that it feels triumphant and nihilistic all at once. It’s like this entire film was crafted to leave you with questions. I mean that in a good way, though. This is a film that will stick with you for awhile. 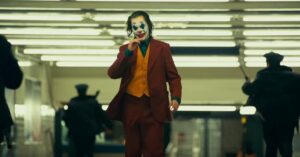 The Man Of the Hour

Holy shit, man, when I heard that Joaquin Phoenix was going to be the next Joker I wasn’t sure how I felt about it. I mean, he was great in Ring of Fire but The Clown Prince of Crime is a bit different than The Man in Black even on a bad day. He was spectacular, though. Phoenix was convincing from beginning to end. From suffering through life to reveling in chaos, he really pulled it off.

Instead of a cartoonish philosopher or a blinged out Soundcloud rapper, this incarnation of the Joker is dark, angry, and prone to random acts of violence. The thing I liked about Nicholson’s Joker was that he was more grounded. There was some motive to what he Is doing. Phoenix’s Joker is given a pretty clear motivation. This is what I think makes this once of the best incarnations of Joker.

While there are scenes that are genuinely uncomfortable to watch, Joker does maintain a bit of humor. He is a clown, after all. Phoenix’s Joker dances on the line between killer and comedian just enough to remind you that he is kind of a funny guy. It adds to his unpredictability.

Joker is one of the best-looking films I’ve seen in quite awhile. The cinematography and set design are gorgeous. The exterior shots are my favorite; they almost make Gotham City a character in and of itself. We get to see the grandeur grit of the city and it looks great. Joker isn’t a bloodbath by any means but when the blood spills it looks good. If I’m not mistaken it was all done with practical effects. Put it this way, if there was CGI it was subtle enough that I didn’t pick it up.

The soundtrack to this film is incredible as well. I wouldn’t just throw it on my Spotify and jam to it by any means. However, the songs they chose fit each scene like a glove. Whether It was the old pop tunes or the masterful score, it perfectly highlighted what was happening on screen. Yes, even the song that everyone is crying about. Look, I get that Gary Glitter is a piece of shit. I do not disagree with that at all. All I’m saying here is that “Rock and Roll Part 2” fit that scene perfectly. Even in silence that would have been a great moment in the film but that tune just really pushes it to a whole new level. On the bright side, Gary Glitter won’t see a dime (or pence?) from the song’s use in the film because he doesn’t own the rights to his catalog anymore.

All in all, would I recommend this movie? Yes. I absofuckinglutely would.  It doesn’t matter if you’re a fan of comics or not. The beauty of Joker is that it is more of a character study than a comic book movie. It’s a slow descent into madness that packs both style and substance in generous amounts. In that aspect it lives up to the hype. I’ve seen several reports calling Joker the most disturbing film of 2019 and that is total bullshit. Sure, it gets a little dark and even uncomfortable to watch in a couple spots but this is far from a film that will scar you for life.