Welcome back, horror fiends.  Full revelations unfold. Deception and deceit are exposed, and new ones created… and our campers still have not arrived.  So, get ready, because we are going to join our group, already in progress, in this week’s episode 4 recap of American Horror Story: 1984.

This week’s episode starts off with a flashback.  Montana snorts some coke and leads a men’s-only midnight man-aerobics class.  This is the most sequenced group.  Have you ever tried an aerobics class? I could never keep up.  Tactical Ramirez, in a duty belt, walks into the class.   Montana walks over to him and in ’80s cheesiness says, “Hey Rambo, this class isn’t for posers, it’s serious”.  Ugh, okay.  While Ramirez rants about how the world is shit and Montana flirts by spewing the details of his knife, an aerobic enthusiast complains about the play list (Billy Idol) and demands Cyndi Lauper.  When Brooke disregards him, he storms out.  I guess girls just want to have fun.

After class, Montana is alone in the dark, getting changed in the locker room.  When she looks up, she discovers the displeased playlist patron gutted and strung up to the ceiling.  That’s what you get for not liking Billy Idol.  Ramirez walks in and asks if she likes her gift.  Montana standing in blood, is deeply touched by his gesture.  Ramirez licks the blood on her feet, and they get it on.  Afterwards, they have a cuddle moment and Montana asks if he would kill for her.  Montana speaks about a girl who took away the only person who ever loved her: her brother, the best friend, who was murdered at Brooke and Sam’s wedding.  And she wants Brooke to die a slow painful death.  A vow is made between Montana and Ramirez.  And now we understand the connection.

We come back to where we left off last week and Montana is asking Ramirez why he has not killed Brooke yet.  She tells him that Jingles is at the camp conducting his own murder-thon, so he needs to get focused and “make that bitch pay”. Not much is developing here as this gets dragged out.

Meanwhile, Xavier and Trevor take Chet to the infirmary to tend to Chet’s wounds.  Chet passes out, so Trevor goes all Pulp Fiction, and stabs him in the chest with an epinephrine shot. Chet jolts up Mia Wallace style.  Xavier remembers that Blake drove his Cadi to the camp and left the keys inside.  So, Trevor decides that he and Xavier will go grab Margaret and Bartie (again), while Chet stays behind, (for now).  They have the decency to arm Chet with a scalpel.  It worked for Chucky and Gage, so Chet should be golden.

Next, Margaret is walking in the forest and discovers the two townies killed by Jingles.  Trevor comes upon her and confirms that Jingles was behind these deaths.  Trevor tells her they have to “get the fuck out of here”.  But Margaret is not going anywhere since the campers are coming at dawn.  She states they will be safe because she has a gun.  Trevor announces he is going back to the real world and runs off.  Trevor is the best in my book.  Let’s make him the ‘final girl’.

Xavier finds Chef Bartie, making sandwiches for the campers.  Frantically, Xavier exclaims they are all going to die, but Bartie laughs it off.  That smile quickly fades when Richter walks into the mess hall. Xavier, not messing around, hides under the table.  Bartie nervously starts a conversation with Richter and offers to make him his favorite, peanut butter and jelly sandwich.  Richter asks why she is at the camp.  Bartie relays how the camp is Margaret’s prison, so she was here to support her.  Under the table, Xavier tried to slither away but dropped his flashlight.  Figures.  The rumble is on.  As Richter is dealing with Xavier, Bartie attempts to attack Richter, but he tosses her out of the way.  He knocks Xavier out, stabs Bartie then puts Xavier in the oven.  450 degrees for 45 minutes… an extra five if you want him crispy. 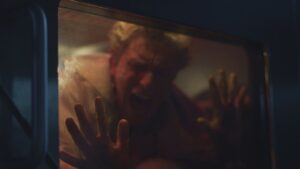 Next scene, Brooke wakes up in the shed that Rita locked her in.  She manages to break down the door and is faced with two paths that both are booby-trapped, courtesy by Rita.   She manages to avoid one but gets caught in a net that lifts her into the air.  Rita walks over to Brooke and brags about brining Jingles to the camp to study him in the wild… all in the name of science, of course, and Brooke is the bait… we heard this all before.  At this point I’m kind of excited to see Brooke as bait and would like to see her demise.  I’m not buying this sweet innocent act.

Jump over to Xavier still in the oven and getting crispy.  Chef Bartie manages to get him out before he is overdone.  Due to her suffering she pulls out a butcher knife for Xavier to finish her off, reluctantly, he does.  As he prepares to leave, he catches his reflection and is shocked by his burnt appearance.  There goes that acting career.  Hey, try horror movies. 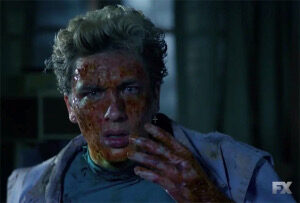 Montana finds her frenemy, Brooke still trapped.  In a couple halfhearted failed attempts to unsuccessfully free her, Brooke tells her to get help.  Before Montana can leave, she stops to tell Brooke how brave she is. This felt a little awkward and forced.

We go back to Margaret, who is in her cabin checking her revolver and reminiscing over a carved wooden bear… Insert Wayne’s World dissolve… Duh Loo Loo Duh Loo Loo…  It’s the ‘70s, and Richter is sitting at a camp bench carving a bear.  Young Margaret in pigtails, flirtatiously asks if that is for her.  Richter says yes and it is something to watch over her.  While in their moment, some campers make fun of them and suggest what a cute couple they are.  Basically, Margaret is weird, and everyone makes fun of her.  Margaret plants the seed and tells Richter she hates them.  As Richter replies, he cuts his finger and Margaret seductively sucks the blood.  She then asks ‘Benji’ (her pet name for Richter) if he is her bear and if he would do anything to protect her. TOLD YOU! She is a first-class manipulator.

Head back to Ramirez and he is performing a satanic ritual to find Brooke.  But Montana shows up, his prayers have been answered and they go to Brooke.  Jingles crashes the party before Ramirez can kill Brooke and Ramirez climaxes all over Jingles.  Gross, not literally.  Ramirez is praising Jingles for his work in the past, but it is his time to make a name for himself.  Meanwhile, Montana sneaks up on Rita who is lurking behind the bushes and they go all GLOW on each other.  Rita and Montana go rolling down a hill.  Rita attacks with a kick to Montana’s gut, she falls over.  Before Rita can take a rock to her head, Montana swings a thick branch and knocks Rita out.  Jingles and Ramirez are still battling it out and Brook manages to swing and grab onto a tree.  The strength of Jingles can’t be matched.  He picks up Ramirez and rams him into a tree with a branch sticking out and impales him through the head.  Jingles looks over and realizes Brooke has escaped.  I chuckled when he gave a tired sigh… Yes, I’m sick of her too Mr. Jingles.  As everyone sonders off we see Ramirez snap the branch with the strength of his head.  Add the supernatural twist that AHS always has.

Margaret is on her knees…praying, reaffirming her devotion to God, asking for strength to do his will.   During the middle of her righteous confession, her Benji shows up.  She asks him why he came back and he tells her it’s to finish what he started.  But, being the foolish man that he is, she corrects him.  She recounts how she was the one that set him up, planted evidence, killed everyone then told the police it was him.  We learn that Richter didn’t remember anything because of his electroconvulsive therapy treatments.  She berates him further by saying he was too weak to ever protect her.  Pissed, and emasculated, Richter pulls out a butcher knife and tells Margaret that he is the monster she made.  But quick draw McGraw, Margaret gets three shots off and Richter drops. Wrong guy right time.

Simultaneously, Trevor and Chet hear the shots as Montana shows up.  Trevor thinks Margaret is in trouble, so he goes to check on her.  Chet and Montana make their way to the car.  Trevor barges into Margaret’s cabin and sees she killed Richter.  As he celebrates her shooting skills, she stabs him.  NOOOOOOO!!  She conveys that this is part of her current framing plan and now balance is restored.  She believes that God has given her the strength to be true to herself.  Not sure if He is on her side, because when she turns around, Richter is gone.

Xavier is wondering around in the forest hurt and comes to a bridge. Richter, also wounded, approaches the same bridge.  Richter, confused, says “it was her not me”.  Brooke comes upon Xavier and Richter is gone. I think Xavier is confused at this point, not sure if Richter was really there or not.  Then there is a huge explosion and we see Margaret, Xavier, Brooke, Montana and Chet standing around the burning Cadillac.  There goes their only way out.  Geeze, I wonder who did this? Speaking of the guilty party, Margaret, with crocodile tear, tells them Jingles killed Trevor and tried to kill her.

We end with Ramirez on the ground with whispers in the air saying ‘Satan’.  Rita wakes up and witnesses Ramirez levitating in the air while being restored by the powers that be.  She gasps, he looks her way and laughs menacingly.

Not much happened in this episode in the way of surprises.  I think we all assumed that Margaret was the one who was behind all the killings in 1970.  Brooke is still annoying and continues to elude being killed off.  Montana is still harping on Ramirez to kill Brooke.  Ramirez is still unsuccessful killing Brooke and spends more time chanting to Satin.  We did see a rebirth of Ramirez as he came back from the dead and all his wounds healed.  Oh and he can levitate.  Chef Bartie finally had her 15 minutes of fame, but we won’t be seeing her anymore.  The bad ass scene this week was watching Xavier in the oven.  A major disappointment for me was seeing Margaret kill Trevor.  I was growing fond of him, not for his looks but for his brains.  He was the only one that thought fast in times of stress and took action.  Looks like I will be turning to Xavier to take Trevor’s place as a runner up.  We will see if next week kicks it up a notch.  I don’t think we will be seeing those campers even though we are hitting mid-season.