3 from Hell picks up shortly after the events of The Devil’s Rejects. Otis, Baby, and Captain Spaulding miraculously survived their showdown and are ready to raise hell once again. First, they have to find out how to get out of prison.

I’m not going to go too deep into spoiler territory. Without further adieu, let’s get into it!

Sid Haig is barely in this film. You guys remember that little teaser they put out with him giving a badass “Bozo Jesus” speech? I hope you liked that because that’s basically the extent of his involvement in the film. He dies in prison off screen. I’m not going to sit here and theorize as to why he was killed off after being on screen for less than a minute (minus some flashback scenes). I will say that his absence led to a whole new problem.

With the incomparable Captain Spaulding out of commission, Baby gets a lot more screen time and more lines than I remember her having. I know I’m not the only one who can’t stand Baby Firefly. Everything about that character seems like it was created to be as grating as possible. She’s basically The Annoying Orange with tits. I will admit that she has a couple of cool moments. Those moments are usually immediately stepped on by more super annoying “look how psychotically cute I am” bullshit.

The big difference between 3 from Hell and the other two rejects movies is that instead of Bill Moseley and Sid Haig carrying the whole damned thing, it’s Bill Moseley and Richard Brake. Otis is in top form. He’s as bat-shit insane, volatile, and hilarious as usual. We were lucky enough to get him in The Horror Basement for a few minutes, you should check it out. Richard Brake’s character, The Midnight Wolfman (a half-brother) is like a younger not-so-batshit Otis. They are fun to watch whether they’re getting drunk and talking shit or adding to their body count. That’s what we came for anyway, right? Blood, violence, and one-liners.

A ton of the blood and the aftermath of the violence is CGI.  That’s right! This film that is supposed to feel like an old grindhouse exploitation film has a bunch of fucked up CGI. I understand adding a little extra here and there to enhance the practical effects. That’s fine. When you have a full on wound in a prominent area that is CG it looks horrible. The worst part is that there are some really cool makeup effects on a couple of the corpses early in the film. I won’t knock CGI every time I see it but this is fucking ridiculous.

I will say, though, that other than the unnecessary amount of computer generated red stuff, this film looks pretty good. It has that gritty, grimy, grinhouse look about it. Hell if they would have went old-school on the effects it would have been a really cool nod to the golden age of exploitation. Everything else about this film from the dialog to the setting and everything in between wants so much to be an old school exploitation flick. In my opinion, the final product feels more like an imitation than an homage.

Don’t get me wrong, 3 from Hell is definitely an exploitation film. Just not the kind it wants to be. 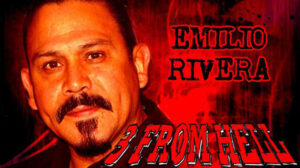 On the other hand, there are some great supporting characters in this film. The son of Rondo (Danny Trejo) is played by Emilio Rivera who fans of Z Nation will recognize as El Scorpion. He plays pretty much the same character and I loved every fucking minute of it. He might have been my favorite part of this movie. Also, Pancho Moler plays a really cool part in this film. You can check out our interview with him here if you want to know more about this film and Candy Corn. 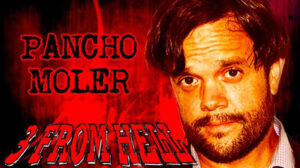 All in all, would I recommend this film? Not really. If you’re a fan of the other two films or Rob Zombie’s work in general go ahead and give it a watch, otherwise skip it. Even for those who liked House of 1000 Corpses and Devil’s Rejects, this one may be a bit of a letdown. It is definitely the weakest of the trilogy.

As I’m writing this, 3 from Hell will still be in theaters for two more days. If you want to check it out head over to the Fathom Events page to check showtimes and ticket availability.