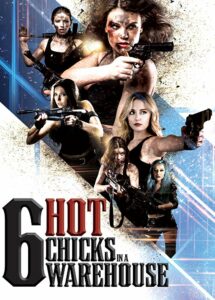 An insecure photographer with a checkered past books a photoshoot with six models. After hearing them talk about what a creep he is, he drugs them, locks them in small cages, and plans to get what his revenge. The models have to work together if they have any hope of getting out of his warehouse alive.

Do you know what my favorite part of this movie is? The title sets an expectation and the film delivers. 6 Hot Chicks in a Warehouse is everything I thought it would be and more.

Before We Dive In…

Recent events have shown just how strong the “cancel culture” of the Internet can be. So many people are worried about not offending anyone and making sure their films meet diversity and sensitivity standards right now. They do this because if not, there will be some ultra-woke film critic on Twitter complaining about the micro aggressions in the script. It’s a really fucking weird time for media and entertainment.

That is why I am so glad to see movies like this. Films like 6 Hot Chicks in a Warehouse, Amazon Hot Box, and High on the Hog are important films for the time. These show that you don’t need to check all the woke boxes to make a good film. They show that somewhere out there, sleaze is alive and well. Most importantly it shows that there are filmmakers out there who are willing to go against the dueling hiveminds that are currently fighting for our attention and allegiance.

The Movie opens up with a little bit of character development on Mira. She is setting up a big shoot with a photographer named Adrian. It is revealed that her modeling is something that she has to keep secret from her parents. This reveal comes in the form of her sister Cassie blackmailing her. After a bit of sibling bitchery and some classic “you’re not leaving the house dressed like that,” from their stepdad, Mira heads off to meet up with her fellow models. 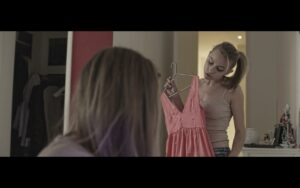 Through some flashbacks we learn that Adrian is a pervert. He used his position as a photographer to peep on models while they were changing and in the shower. This not only lets us know why all of the models are a little skittish about working with this dude it also injects some sleaze. Surprisingly, I think Adrian’s flashback creepfest is the only nudity in the movie.

It is around this time that we learn about some of Adrian’s insecurities and his incestuous relationship with his sister. The second one never really comes up again but I thought it was worth mentioning. Adrian is tired of being a scrawny girly-man so he gets himself some supplements that will pump him up! The side effect is that it makes him black out and go into a crazy violent rage.

After all the groundwork is laid, the models arrive at Adrian’s studio which is also his home which is also a warehouse. There are six chicks, they are hot, and there is indeed a warehouse. This is the kind of truth in advertising I can get behind. Adrian has a bit of banter with the ladies before showing them where they can change and get ready for the first portion of the shoot.

For the first part of the suit, the ladies are given super skimpy costumes. All but Mira are given sexy sports themed outfits’ Mira is dressed as a sexy nurse. The shoot goes off without a hitch. There is a long montage of all six models being as sexy as humanly possible. After the shoot is over, the ladies take a break and Adrian brings in the props and outfits for the second part of their shoot. 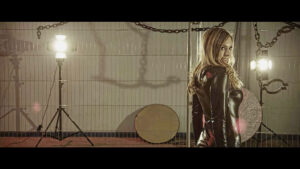 Then Things Take a Turn

After the bondage portion of the shoot is done, Adrian and the ladies are ready to celebrate. As he is getting things situated so that they can all enjoy some cake and champagne, he overhears the models talking. They are all talking about what an absolute creep Adrian is. Mira tries to defend him but is then accused of fucking him. She gets super defensive and tells the others that she would never let Adrian anywhere near her. This hurts Adrian deep in his feelings. Mira was his “muse” he had something for her but she definitely wasn’t feeling it. It’s at this point that Adrian decides to go for some good old incel retribution. 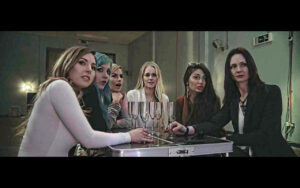 He hands all of the models glasses of champagne. We quickly learn that Adrian is a graduate of the Bill Cosby School of Mixology. The ladies all pass out from the roofies and wake up in small dog kennels. The kennels are just big enough for each model to kneel or lie down in if she scrunches up. Outside those tiny cages, Adrian has constructed a larger cage with electrified panels.

Then Comes the Violence! 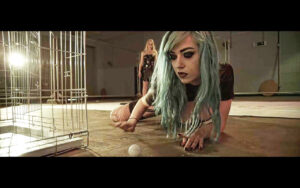 He starts explaining the side effects of his supplements to the models. Then, he informs them that two of them were injected before they woke up. It would be obvious who was injected in a couple minutes, he tells them. He wasn’t lying. Two of the women manage to force the door of their kennels open enough to get out. Once they do, the drug forces them to fight. First, they go at it with just their hands and feet. After a little bit of a scrap, Adrian tosses in a weapon to make things more interesting. After one of them is knocked out and the other is shocked on the electrified panel, the unconscious women are put back in their cages. This is the gist of most of the rest of the movie and it’s great. 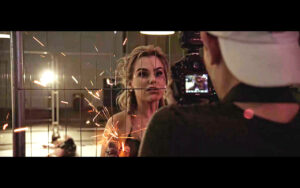 After several hot leather-clad chick fight scenes, Adrian fucks up. He makes enough mistakes for the models to start working together. The plot wraps up about the way you would expect. It walks a thin line between satisfying and anticlimactic. Then there’s a little mid-credit scene that might be (fingers crossed) hinting at a sequel. I would totally watch another one of these flicks. 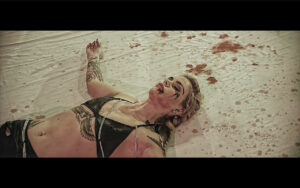 Overall, 6 Hot Chicks in a Warehouse is a good movie. The cinematography is pretty solid, the location is nice, and the cast is magnificent. Seriously, all six of the main ladies in the movie put on great performances and they are ridiculously hot. Adrian is a believable incel/”nice guy” type and watching him lose his mind is entertaining as fuck. The fight scenes and bloodshed are both done really well.

There are some plot holes and some shit that doesn’t quite add up but that really doesn’t matter. This flick is an updated version of a “women in prison” film. It’s all about bad ass beautiful women beating the shit out of each other and then getting revenge on their captors. In that sense, 6 Hot Chicks in a Warehouse delivers in spades.

All in all, would I recommend this movie? Fuck yeah I would! 6 Hot Chicks in a Warehouse is one hell of a fun ride. It’s sexy, violent, bloody, and there is some great camera work going on. You can find this one on Amazon Prime right now and it’s fully worth the few bucks it’ll cost to rent.