Steeped in the traditions of such found-footage indie hits as The Blair Witch Project and Paranormal Activity, the film Unlisted Owner (2013) follows a group of teenage friends who decide to take a detour on their way to a camping trip in order to visit a house in which a family has recently been murdered. As they explore the house, however, it becomes clear that they’re not only trespassing on a crime scene—they’ve become part of the crime scene themselves. 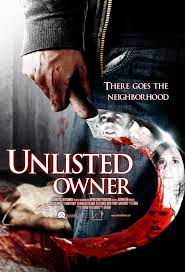 Unlisted Owner captures the bulk of its spark and potential during the beginning and ending of the film. The beginning features chilling intercut scenes and well-paced dread, as well as a smart and eye-catching use of experimental storytelling. The final 30 minutes of the film become increasingly intriguing and suspenseful and generate a few genuinely eerie moments. Although the acting feels a bit shaky and awkward initially, it improves over time.

Despite these strengths, the film ultimately falls victim to its slow middle portion. Much of the storyline is cluttered by a shallow exploration of the group of friends, whose off-putting immaturity and lack of compelling chemistry lead to an excess of pointless dialogue and arguments. Instead of building upon the suspense of the first few scenes, much of the storyline is dedicated to the group’s disagreements about their trip plans. Although the last 30 minutes pick up speed and provide some entertainment, it is unable to lift the film from its general sluggishness.

Overall, Unlisted Owner offers glimpses of potential, but is ultimately weighed down by a lack of direction and purpose in its storyline.