The Head Hunter follows a barbarian warrior who roams the wilds to rid the world of monsters. He collects the head of each beast he kills. The only head missing from his collection is the one of the beast who killed his daughter. Even though he is tasked with protecting the kingdom, his lust for vengeance dives him forward.

If you want to avoid spoilers, go ahead and stop reading now. This review is going to be lousy with spoilers. You have been warned.

First off, this movie is fucking gorgeous. The cinematography is crisp and clean. The locations are perfect for the story. When I think of a barbarian hunting monsters for vengeance and duty, this is where I see it happening in my mind. 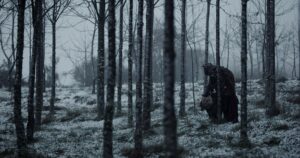 The costume and set designs are absolutely mind blowing. The protagonist looks like he was ripped straight from Skyrim or some other really badass fantasy game. He’s a mountain of a man with an epic Viking-esque beard decked out in some bad ass armor. If I were going to hire someone to hunt monsters, it would be this guy. No doubt about it. 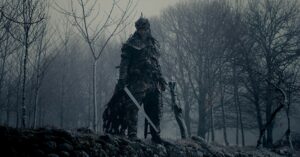 The monster heads in his collection and the one beast you get to see him fight are just as badass as the rest of the visuals in this film. They’re realistic and gruesome trophies of hard-fought battles that line the walls of his small home.

Honestly, this is one of the most visually stunning movies I’ve seen in quite awhile.

The plot is pretty simple. The protagonist protects the kingdom from monsters. Years before the beginning of the movie, a beast killed his daughter and he is waiting for that monster to return so he can nail its head to his wall.

The horn will blow from the castle wall, he will grab all his monster-hunting gear, jump on his horse and ride off. A few seconds later we cut to him coming home, mounting a head on the wall and healing his wounds with some magic black salve shit.

Really, all we get for most of the film is brooding, riding away, and mounting magic critter heads on spikes. Sure, the critter heads look cool but goddamn. When I went into this movie I kind of expected him to be fighting something. I would have been okay with dudes in suits or horribly rendered CGI monsters. No. Brood, ride, mount, repeat.

Finally, the monster he has been waiting for returns to his realm and he can go kill it! He does just that. Off screen. Yup. What could have been a climactic battle is just more of the same. Luckily, a shutter blowing in the wind knocks a jar of his magic salve onto the sack containing the monster head and brings it back to life.

Now we have an ugly skull with a spinal cord attached crawling around speaking gibberish. It goes and attaches itself to the skeleton of the protagonist’s daughter and he has to go hunt it back down. At least we get to go along on this hunt.

It’s not all that great, though. He wonders into a tiny dark cave, ends up pulling the skull monster off his daughter’s skeleton and stabbing it about seven or eight times in the head. We only get to see the blade land once, though. Even then, it’s poorly lit and we only get a quick glance at the creature. To be fair, the creature looks great if you can catch a glimpse of it.

He takes the creature back to his hut, still in a burlap sack. Then he smacks the piss out of the sack with an axe before going in to prepare a spike on which to mount the head. When he goes back outside, we hear the tell-tale sound of a big blade slashing into some kind of flesh and some critter noises. The protagonist walks back inside to mount the head on the wall. It turns out that the beast was somehow alive, cut the guy’s head off, stole his body, and mounted his head on the wall. All but the head mounting is, you fucking guessed it, done off screen.

This was the longest hour and ten minutes of my life. Honestly, if it wasn’t for this review, I would have turned it off when it became evident that nothing was going to happen on screen. Look, I get budget constraints. I do. I watch a ton of low-budget flicks and really enjoy most of them. Also, I’m a pro at being broke as fuck. I understand doing what you’ve gotta do to make something work. This movie, in my opinion, didn’t work.

I will say that The Head Hunter was a beautiful thing to behold. Seriously, this film is gorgeous. The creature effects, costuming, and cinematography were superb. Hell, the story itself was pretty cool and the protagonist was well-performed. The movie was just fucking boring. This probably would have been an incredible short. At an hour and ten minutes, though, this movie is about forty-five minutes too long.

All in all, would I recommend The Head Hunter? Nope. If it wasn’t so nice to look at, I would say to avoid it completely. If you can catch it for free somewhere, totally check out a few minutes of it just to see how cool it could have been. Other than that, though, I wouldn’t waste my time or money on it.