Hello, Dear Reader, and welcome (back) to Fucked up Fridays. This week’s installment is going to be a little different. I was just going to do a straight-forward review as usual but I decided to go a different route with this one. The underlying commentary on this film really made me think about some things and I want to share some of those thoughts with you guys. So, without any more rambling let’s get into this week’s movie: The Cohasset Snuff Film. 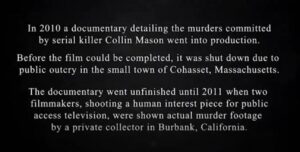 Collin Mason was a high school senior with a  dark past. He was a small town nobody with dreams of being a famous filmmaker like his idols. Collin also wanted to strike a blow to the “stuck up” girls in his school who he felt thought they were “untouchable”.  So, he decided to do both of things at once. He would work through his list of girls that needed to die and film them. He knew that this would make him a household name.

The crimes, the events leading up to them, and monologues were then uploaded them to the internet. Within days the videos went viral and the families of the victims as well as the more influential residents of Cohasset worked to have Collin’s videos and any content related to them scrubbed from existence through legal action. In fact, the residents and local government worked to deny that these events ever took place.

The Cohasset Snuff Film is set up as a documentary with the aim of exposing Collin Mason and the events that took place in Cohasset. The producers searched far and wide to find Collin’s videos as well as his fellow students’ vlogs reacting to the crimes. Finally, they traveled to Cohasset to interview survivors and those who knew Collin the best.

Overall, this film feels like a documentary that would be put together by a top tier YouTube channel. It’s not quite cable network level but it looks good. None of the interviewees come across as actors. The guys who hung out with Collin in high school seem like some dudes who really had a friend who went off the deep end. The professionals that talk about his mental state seem like they know what they’re talking about. They interview a father of one of the victims and the breakdown he has before he can finish the interview feels real. 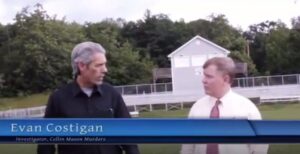 There are a few main elements of this film. There are the videos made by Collin, vlogs made by his classmates, and the interviews. These are all spliced together in such a way to really drive home Collin’s descent into madness and the effect his actions had on the people of his small town.

As far as the interviews go, none of them seem like they feel very comfortable being on film or talking about Collin’s crimes and their aftermath. In most other contexts this would detract from the effect but in what is supposed to be an underground documentary, it really works.

Collin starts off shirtless talking to his camera. He is telling the audience how he wants to become a household name. Collin finishes his first monolog by saying that those who can watch his “masterpiece” to the end are just as sick as he is. Later, Collin  talks about the girls he wants to kill and so on and so forth. These little gloating vlog-style videos usually come just before and just after a kill. He takes his “fans” through the thought process of setting up the kills, his motive, and finally the kills themselves.

Between the vlogs and the videos of kills, there are the shots of Collin stalking his prey. These are all POV shots of different girls going about their daily life. They’re shot from concealed locations and the sometimes the focus isn’t the greatest. In short, they feel like actual videos shot by a stalker. His spiteful narration over these shots really drives home his contempt for his victims and their friends.

There are only four actual kills in this movie with a fifth attempted. The first is done outdoors at night. The victim struggles and Collin almost botches the whole thing. You hear more than you see. The second kill is Collin’s ex-girlfriend. She’s completely nude and he kills her by wrapping a nylon rope around her neck and strangling her. In this kill, he is more prepared. The audience is given the juxtaposition of a young, beautiful, nude woman struggling against her attacker. In the end, Collin stands over her corpse, filming her for his “fans” and taunting her. This is pretty much the peak of violence in the film.

Not the nekkid murder but a murder nonetheless

The effects aren’t really in the forefront of any of the kills. The struggles, however, are pretty convincing. The makeup effects on the corpses are also really well done. When there is a little blood spilled or spattered on screen, it’s effective. This movie isn’t trying to shock you with gore, it wants you to think about what you’re seeing. 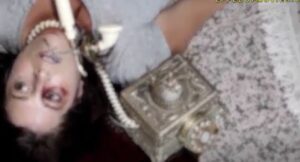 Nothing extreme but I can dig it

There are several vlogs from a handful of Collin’s classmates reacting to each of the murders throughout the film. Near the end, the vlogs begin to focus more on the overall case and Collin as a person. These all seem genuine. They aren’t over acted but the emotion in each one is evident. The people delivering the messages seem less like actors and more like someone who is recording a vlog without much rehearsal. I really like how these come across. They really add depth to Collin’s murders.

Final Thoughts on the Film

All in all, would I recommend The Cohasset Snuff Film? Yeah. I would. It’s an interesting found footage/documentary style flick with a couple good kills and some nice casting. Beyond the murders and descent into madness, I feel like this movie has something to say. If you liked The Poughkeepsie Tapes, I think you’d dig this one.  If you just wanted the review of the movie you can stop reading.

This film is packed with social commentary. It looks at our failing mental health system, the hell that is high school, and one of the worst case scenarios of the combination of the two. I also find it interesting that this film criticizes its audience as well as those who would watch similar videos online.

Throughout the film, Collin is shown to be a very intelligent guy with some serious mental problems. Even those closest to him didn’t realize that he needed help until it was too late. Even the aunt who raised him did not see the signs that he was mentally ill and possibly dangerous.

How many times have we seen this same story unfold? Seriously. How many times has someone done some outlandishly evil shit and then we have their families crying in interviews. They always perform some rendition of the hit single “I Had No Idea there was a Problem”. Sometimes they recount a bunch of red flags that they were shown and perform, “I Guess I Should have Known,” as an encore.

In The Cohasset Snuff Film, Collin’s friends and his guardian talk at length about how damaged he was and how they somehow didn’t realize that there was something wrong with him. The way it’s presented is almost critical of those people and the others who croon those same tunes in real life.

We all get caught up in our own shit and I’m no different. Under the mayhem and madness of this flick, it is urging you to pay more attention to those you are close to. It reminds us that red flags shouldn’t be ignored.

This movie centers around a high school senior and his classmates. Some of the shit Collin says during his rants could be applicable to just about any situation where you’re around a bunch of humans on a regular basis. When he botches the murder of a girl that he had known for over a decade, she can’t identify him. Let me clarify. He got her in broad daylight with no mask on and he talked a bunch of shit while he was trying to choke her out. She had no idea who attacked her.

After this happens, he rants about Columbine and about how you walk past people in the hall every day without acknowledging their existence. Without laying it all on the table, Collin talks about how it feels to be unnoticed and forgotten about by your peers. He urges people to be nicer to one another and to take a second out of your day for a kind greeting once in awhile. We hear that shit from all kinds of people but when the guy who strangles high school chicks for fun is saying it the message seems a little more poignant.

The Cohasset Snuff Film also takes a second to criticize one of the things that really brings my piss to a boil: fake grief. Collin’s first victim is a goth chick. She wasn’t really known to the popular kids and really only had one friend at the school. When they find her body, though, everyone loved her. The student council president gives a big speech about her. One of the other popular girls uses her death to advertise a yearly blood drive.

This is the kind of shit that you see every time someone dies. If a celeb kicks the bucket everyone becomes their biggest fan. When a regular person dies, everyone in the area loved them so much and is so saddened by their death. This shit makes me sick. The way we all elevate the dead to sainthood even if we thought they were assholes or hated their band.

The inclusion of this performative grief not only adds to the realism of the film, it is a mirror held up to society. It shows those who engage in this bullshit how transparent they are. It lets them know that we can all see how shallow it is, even if no one calls them out on their bullshit.

Some of you will remember the killings around UC Santa Barbara back in 2014. Basically, Elliot Rodger was mad because he couldn’t get laid. He bitched about it in a video, sent out a manifesto, and then went on a killing spree. 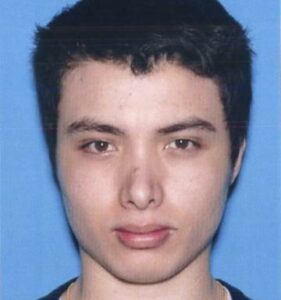 Rodger killed six people and injured fourteen others. The whole reason behind doing this was that he hated women because he couldn’t get laid and was jealous of dudes who were getting laid. Elliot Rodger was ignored and felt invisible. He was a coward and a piece of shit.

I bring him up for two reasons. First, Collin and Elliot look a whole lot alike. I mean, they could be related. Also, while listening to Collin speak, I couldn’t help be reminded of Rodger’s “Retribution” video.

This film came out two years before the UC Santa Barbara killings. Yet, it seemed so much like a commentary on those crimes. From the resemblance to the motives, it is spooky how much alike the two are. Seriously, if you decide to check this movie out you should familiarize yourself with this case as well. You’ll be shocked at how similar they are.