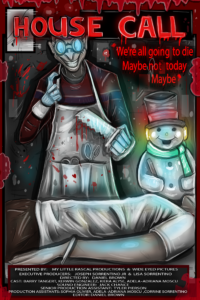 House Call is a blood-drenched black comedy that reminds us that we never know what is lurking behind the well-kept lawns and HOA-approved decorations of suburbia.

This is one of those that is tough to talk about without giving up spoilers but I’m gonna do my best.

The upbeat score and beautiful cinematography really lull you into a false sense of security before this film gets down to the nitty gritty. Before I knew it, the blood was flowing and damn does it look good. I haven’t cringed that hard since American Guinea Pig: Sacrifice. At the same time, I found myself really liking the villain and laughing at all of his jokes. Hell, a nice dinner and some wine and I’d probably end up in his basement. He was that good. It’s one thing to write a really likeable villain but making torture funny is a whole new level of storytelling. Torture has never been so fun!

I think some of that balance comes from the fact that it isn’t mean-spirited or overly violent. While it’s bloody and batshit crazy you don’t see everything happen. You’re shown plenty, don’t get me wrong you just don’t get every cut and poke. There is none of the normal “grr I’m scary, now I’m gonna hurt you a bunch,” dialog that usually comes with films like this. That kind of thing would have fit just fine and the short still would have been really good. Instead,there is light-hearted banter and some great one-liners that take the whole film to a completely different place. I don’t think I’ve ever seen this combination before and by god I need more of it, stat!

This is one of those shorts that make me hope it turns into a feature. The final scene of House Call left me wanting more.  So when this short is released to the masses I’m gonna need every one of y’all to do ol’ Yeti a solid and check it out because I need this to be a full length film. I would even settle for a sequel. You’ll understand when you see it, I guarantee that. You’ll thank me later.

All in all, would I recommend this film? Yeah.. but I can’t. House Call is currently playing festivals only and won’t be released to the public just yet but when it is you can bet your favorite rusty scalpel that I’ll let you know.