We (Wij) tells the story of a summer shared between eight teenage friends. Over the course of about four months, the four boys and four girls explore their sexuality, dabble in prostitution and blackmail, and experience mind numbing tragedy. It is an unforgettable film about an unforgettable summer.

I’m not going to get too deep into spoiler country here, but I do feel like I need to lay out the basic premise of what is going on in the film. To start with this isn’t your run of the mill horror movie. This is more like a coming of age story, but the ones coming of age are really fucked up. In the span of a couple  scenes, the teens go from almost innocent exploration to filming hardcore pornography.  At that point, though, they’re all having fun. Things get a little darker when the girls start turning tricks. Then comes the arson, blackmail, and other assorted criminal activity.

We isn’t a movie about a bunch of sexy teenagers doing sexy things, though. I mean, it kind of feels like it is there for awhile. There’s some unsimulated sex and full frontal nudity. Then the tone shifts and you realize that there’s a dark underbelly to this movie; it’s a story about the narcissism and nihilism that can only come from inexperienced youth. It’s a dark, dirty, mean-spirited film that gets darker and meaner as it goes.

I felt dirty as fuck watching We. Intellectually I know that the actors and actresses in this movie are legal adults. They would have to be in order for like 75% of this movie to be legally distributed. However, the cast is so young-looking that they can really sell the fact that they’re a handful of high school kids. The real kicker is that they don’t just look young; they look innocent for the most part. The juxtaposition between their wholesome appearances and the depravity they’re involved in adds an incredibly disturbing subtext to the entire film.

Pieces of the Puzzle

The writing is incredible. Even through the subtitles, the dialog seems pretty natural, but the narrative is the real star.  The film is almost an anthology; it’s one story told in four parts. The opening scenes present you a puzzle. With each story, you get more pieces. At some point the whole puzzle becomes something else entirely and the picture you thought you were putting together is completely wrong. The plot twists are like short jabs to your gut; they come in rapid succession and leave your mouth agape.

The cast really comes together to pull off some great performances. The chemistry between the friends is amazing. I could believe that these kids all grew up together. While the cast is pretty well balanced, there are some standouts. Pauline Casteleyn portrays the broken, detached, and artistic Liesl. Watching her go from a young woman finding her voice through sexuality to dead-eyed teenage prostitute was absolutely haunting. I am afraid I will see her blank stare in my dreams. Aimé Claeys is perfect casting for the damaged narcissistic ringleader Thomas.  Like Liesl, Thomas’ arc is both heartbreaking and haunting. He goes from a kid who just wants to have fun an make money to a broken young man who is in way over his head and has no idea how to really deal with his baggage. 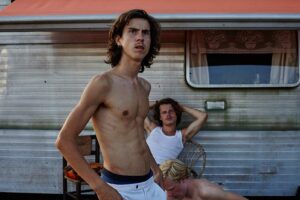 The final piece of the puzzle is the cinematography. Each shot fits the mood of the scene like a glove. Whether it is capturing the beauty of a summer day in a field or the tension of blackmailing a shop owner, We is shot beautifully.

All in all, would I recommend We? Yeah, I would. It’s a really beautiful and engrossing film. If you let it, this film will pull you in quickly and won’t let go until long after the credits roll. This is a film that will stick with you for awhile. This is the kind of horror that reflects real-life horrors and if you’re in the mood for a gorgeous downer of a film, We is what you’re looking for.

You can get your hands on the uncut version of We on Blu-ray and DVD February 18th through Artsploitation Films. It will be available to stream in April, most likely in an altered state that is about 2 minutes shorter. You Should skip the wait and the censorship and see this movie the way it was meant to be seen: as an uncut piece of reality art.