Jurassic Thunder is a gripping, harrowing, and thought provoking cinematic examination of the military industrial complex. Just kidding, it’s a movie about weaponized T-rexes with machine guns on their heads killing zombies. When it comes down to it, I think I would rather watch dinosaurs eat zombies any day of the week.

I’m not going to lie. I was excited about this movie after about the first ten seconds of the trailer. I could just tell that it was going to be a fun, ridiculous, and over the top ride. Take a minute and watch the trailer. If that doesn’t get you hooked, this movie probably isn’t for you. That being said, let’s get into it! 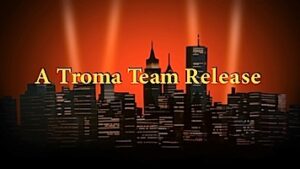 The only thing missing form this movie was a Troma Team logo at the beginning. This flick would be right at home with some of the campier Troma releases. There’s a fair amount of really bad CGI in Jurassic Thunder, but it’s the kind that’s bad on purpose. This is the kind of stuff that would make me turn off a film that was taking itself seriously, but in something like this, it’s a bonus. Underneath the CGI blood spattering and explosions, there is actually some pretty decent practical gore. You only get glimpses of it before it’s “enhanced” with cartoony blood effects though. 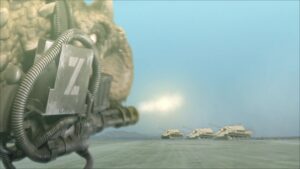 The best looking thing in Jurassic Thunder was definitely the dinos. I’m pretty sure that they were a combination of CGI and puppets or maybe all puppets but digitally inserted. I don’t really know. What I do know is that a T-Rex with a goddamn .50 caliber machine gun on its face is quite possibly the most badass thing ever put on a screen. If you’ve never watched a dinosaur blow up some tanks with its face gun and then eat some zombies, you just haven’t lived. 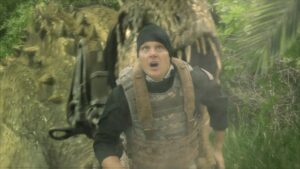 Honestly, the characters are pretty much what you would expect from a WWIII spoof action flick. You’ve got military caricatures with punny names, some Soviet stereotypes, and a couple of world leader parodies. Did I mention that there were fucking dinosaurs with machine guns on their goddamn faced? Really the humans in this movie serve two purposes: they release the dinos and get eaten by them. I’m not saying that the characters or the plot are boring, I’m just saying that’s not why I was watching Jurassic Thunder. I was never one to read skin mags for the articles, if you catch my drift; I was here for the action. 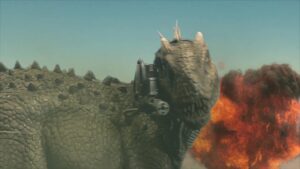 All in all, would I recommend Jurassic Thunder? You bet your ass I would! Seriously, if you saw the trailer and thought it looked fun, you won’t be disappointed. This is grade-A schlock and awe and if you can appreciate films like this, you’ll love it. If not, you probably take yourself too seriously. As an added bonus, the final credits roll to a song by Nashville-based rapper Jelly Roll. It’s completely unrelated to the movie, but for me it was icing on an already badass cake.