I have a strange relationship with representation in film. Like, I’m not going to sit and complain that there aren’t enough Indigenous folks in movies, but I do get excited when I see a movie that has natives in it especially when it’s a horror movie. So, when we got the press release for Lore I was on board immediately. The release announcement said that it was a movie built on Lakota folklore with actual indigenous people in the cast. It seemed like a pretty easy win.

Lore follows Ann and Rich, a newly-divorced couple who are on a quest to find their teenage son. The boy went into the woods for a solo hiking trip to clear his head after his parents’ divorce but never came back. After search parties and law enforcement can’t find him, the parents enlist the help of John, a Native American who knows the land and can guide them better than anyone else.

Did Lore Meet My Expectations?

Not really. I went into this hoping for something like a horror version of Dance Me Outside or Smoke Signals. The press release really got my hopes up for a story focused on Natives and their folklore. I was hoping to find some other legend to really sink my teeth into besides the Wendigo or Skinwalker. In short, I wanted a Native American horror story.

What I got was a movie that is focused on its white protagonists with Indians as little more than plot devices. Sure, the monster in the woods is based on some nebulous Indigenous monster. Even though Sean Wei Mah puts on a great performance as John, his character is just an Indian Guide Trope. 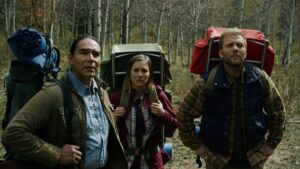 Hey, Rich, what about your dad?

There was one little conversation between John and the parents that I really liked. He is wearing a turquoise medallion (which I’m not even gonna talk about) and they end up comparing it to the white people’s cross pendants. He says he wears it because it brings him peace, comfort, and protection just like their pendants. Drawing that parallel was one of the coolest parts of the movie to me. The dad, Rich, then steps on the moment by asking if the pendant represents forgiveness as well. I don’t know if he’s talking about the forgiveness of Jesus or if he’s talking about all the Indians forgiving white people for hundreds of years of oppression. Either way, it was a shitty comment that killed a cool moment and really summed up Rich’s character.

The Real Focus of Lore

The parents are the main focus of this film. Not the monster, not the folklore, nor the tribal folks. We spend about 90% of the movie with this unlikeable middle-class white couple. I get that they are emotionally damaged. They’re recently divorced and coming to grips with the fact that their only child might be dead but those emotions manifest in some grating ways.

Ann honestly isn’t that bad. She’s a wounded momma bear. The lady is scared and sad, and broken. Her entire character is kind of built around the fact that she is so determined to find her son that it’s bordering on obsession. As a parent, I get that. When Ann is interacting with anyone but Rich she is fine but when they’re together, all of her negative traits rise to the surface.

This is also totally understandable. I would be a total dick if I was trapped in the woods with Rich. The dude is just unlikeable. He’s not really an over the top asshole, he’s just kind of a dickhead. Like I said, his little dig at John’s beliefs kind of sums up his whole character. No matter who it is that is trying to help them, he acts like an asshole toward them. He tries to act like John is hiding something from them then insults him for sharing the lore surrounding the woods. When a little Indian girl shows up (more on her in a minute) he yells in her face for not talking. The little girl takes them to evidence of their son’s location and he treats her like an enemy.

The spooky bits are few and far between. There are some eerie shots of a half-hidden monster in the woods. The only clear shot of it we really get is of the creature’s ankles which only made me want to see more. There is also the aforementioned Little Indian Girl. She shows up at their camp dressed in dirty buckskins and doesn’t say a word. She just leads the couple deeper into the forest to show them evidence of their son’s whereabouts. This character proves that little white girls do not have the corner on the creepy kid market. So there’s that, I guess.

All in all, would I recommend Lore? It depends. If you’re looking for a solid horror movie based on Native American folklore with a cast that is made up mostly of Indigenous folks, I would say to look elsewhere. If you find that please feel free to leave a comment or hit my DMs on Instagram because I’m looking for that, too. Lore is more of a character study that uses some clever metaphors to look at a really difficult topic. If you go into it looking for that, you’ll get exactly what you want.

I would like to take a moment to applaud the filmmakers for being bold enough to showcase racial and cultural tensions and misunderstandings felt between some Natives and white folks. Also, it’s always cool to see real Indians on screen. So, the addition of Victor Gage and Sean Wei Mah to the cast was nice. I just wish their parts would have been bigger.