If I told you I just watched a movie about a military veteran who is trapped in a remote and derelict locale and being stalked by a practically invincible killer, you might assume that I’m watching some 1980s action thriller fare like Predator or Alien. If I told you that the main protagonist is female and that the stalker’s primary weapon is his ability to become invisible, you might even think I watched a weird mashup of Predator and Alien. You’d be wrong on both counts.

Writer/director Justin Edgar’s recent action thriller Stalked certainly appears to take inspiration from both earlier mainstream films. However, Edgar manages to keep all of the threats and all of the action Earthbound. Sam (Rebecca Rogers) is a relatively new single mother who also happens to be a veteran commando of the Royal Marines. A stranger kidnaps her while on her way to the pharmacy. Sam awakens in a deserted military factory. Her iPhone remains at her side, but it can receive no signal. As she pines for her baby and ponders her escape, a seemingly invisible force attacks her. Now, Sam must rely on her military training to escape the stalker.

Based exclusively on the premise, there’s a lot to like about Stalked. Some of the most thrilling action and horror movies center around dropping innocents into an impossible situation and demanding that they survive or escape it. However, Edgar’s attempt to create an impossible situation involves secretly developed military gear known as a stealth suit. The stealth suit renders the wearer invisible to the naked eye, but not to photographic equipment like an iPhone’s camera.

Stalked is a movie, so you can suspend disbelief and allow yourself to buy into the invisibility suit as a means of creating obstacles for Sam. However, this gimmick starts to fall apart when Stalked violates its own internal logic in a number of ways.

First, there’s the prevalence of modern camera equipment and surveillance around the globe. Why would anyone complete the development of a stealth suit that remains perfectly visible through a camera lens in a world in which we are at all times surrounded by cameras? Second, while exploring, Sam uncovers video of the fabric used to create the stealth suit. The individuals in the video are able to demonstrate the fabric’s ability to become invisible even though the fact that Sam is watching a video means that the video was shot through a camera lens. Apparently, the stealth fabric becomes invisible on camera when it is convenient. And these are just two examples. There are several other occasions when Sam’s circumstances feel just a little too convenient for the plot. 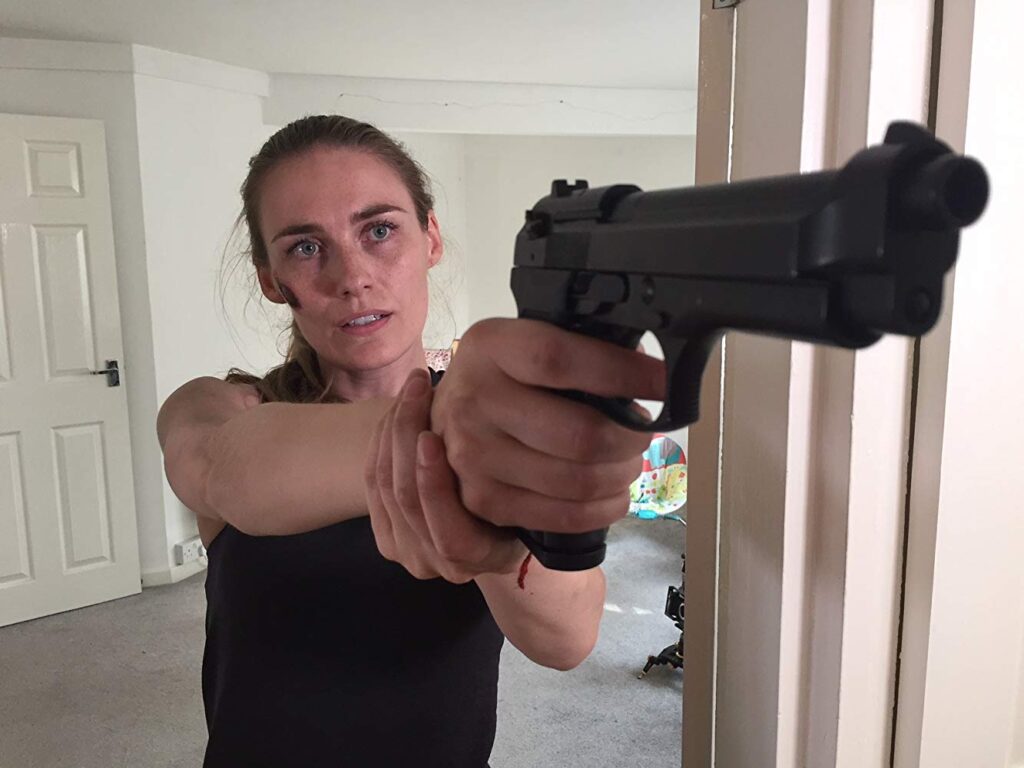 Sam (Rebecca Rogers) relies on her military training to survive in ‘Stalked’.

Story problems aside, Stalked is capably directed and the actors do their jobs well. There are some special effects throughout the movie that don’t quite ring true. They can largely be forgiven or ignored given the movie’s likely low budget. The invisibility effects and choreography stand out for an independent film, especially Sam’s battles with the stalker. There is also a twist at the end, although a relatively predictable one.

Overall, Stalked is not a bad film. There was enough action, tension, dread, and mystery throughout the 82-minute runtime to maintain my interest. However, I think the story would benefit from using old-fashioned techniques for detecting invisibility. A spilled bucket of paint, perhaps? Or bloodstains that soak the stealth suit when the wearer suffers a serious injury? Either of these could have allowed Sam to track the stalker without needing a camera and would have eliminated the logical inconsistently that is the biggest flaw in Stalked.