The Night Sitter tells the story of Amber, a con artist who poses as a babysitter in order to rob a paranormal investigator. When one of the kids she is watching accidently unleashes an ancient evil, a simple robbery turns into a fight for survival. 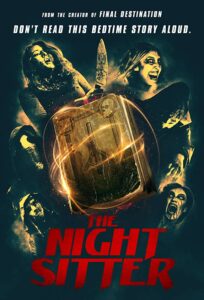 I was pretty stoked on this one when I saw the trailer for it. I loved The Babysitter and I am all about some ancient evil rearing its head and fucking shit up. I knew it was going to be a fun ride but I wasn’t sure about much else.

I’ll be doing my best to avoid spoilers, so I won’t be going too deeply into the plot. Luckily, there is still plenty to talk about.

So the movie kicks off with Amber driving down the road smoking a joint. Pretty girl smoking weed? I’m pretty much already sold at this point. I am, at my heart, a very simple creature. Anyway… She gets to the house and meets Ted and his son Kevin. Ted is a nerdy widower and paranormal investigator. Kevin is a quiet kid, deeply wounded by his mother’s passing and hella pissed that his dad is dating.

After a little back and forth, we learn that Ted is waiting to hear back from a network because he is trying to sell a show that’s basically every ghost hunting show on TV. Amber feigns interest and he reveals that he has never actually had a paranormal experience. He does, however, have an office full of paranormal relics and artifacts. A few minutes later his date and her kid show up. His date is just kind of a suburban soccer mom archetype. The interesting character is her kid, Ronnie. Ronnie is a little cunt. I hated this little shit from the first time he was on screen. I hardly ever wish death on children in horror movies (or in life for that matter) but goddamn I wanted this little fuck trophy to buy the farm.

The parents leave and Amber is there with the boys. Before anything can really get underway , there is a knock at the door and the weird neighbor is introduced. After getting rid of him, Amber orders some pizza, plays some games, and gets the kids ready to crash. Then, she can call her friends over and start hauling off all the valuables ever. Ronnie has other plans and wants Kevin to help him break into his dad’s office because they aren’t supposed be in there. Typical shitty little kid.

From there, things unfold, people die, and a really great yarn is spun. Let’s talk about the other stuff, though.

“Do you smoke? Because you seem like you smoke.”

We first see Vincent staring at Amber as she pulls into the Hooper’s driveway. He’s standing in front of a super fucking rad garage and waving like a creeper as she goes inside. Later on he comes to the door and makes some really awkward small talk. We’re kind of left with the feeling that Vincent is an annoyance at best and a mega creeper at worst.

He gets a little more development later on. This is about the time when he becomes one of my favorite characters in the movie. It turns out that Vincent isn’t a creep. He’s a socially awkward dude with a crush on an extremely hot girl. He’s also a slacker, a pot head, and an expert on the occult. Do you see now why I like him so much? He’s a fat guy who smokes bomb weed, spends hours studying esoteric occult shit, loves horror flicks, and is hella socially awkward. Honestly, I don’t know if I should like this character a bunch or sue them for using my likeness without my permission. Either way, he’s a cool character with a good heart.

I know I’ve mentioned how pretty she is a couple of times but she is so much more than just a pretty face. She’s tough, smart, and really sweet to Kevin. Even though she is there for the sole purpose of scamming and robbing his dad, she really connects with a kid who is deep within his shell. Their chemistry is great and by the time their arc is fleshed out she’s more of a big sister to him than a babysitter.

What I really liked about Amber is that she isn’t a one-dimensional character. It would have been easy to just make her the lesser of two evils in the film. She’s portrayed as a person who is just trying to get by in life. Sure, she’s a thief and keeps questionable company but at the root of it you can tell that she’s a genuinely good person.

Ted isn’t on screen very much but for most of the movie he’s what I would like to be some day. They have a huge beautiful home, he’s a good dad, and he apparently makes his money dealing with the occult. At the very least, he has enough money to invest in a huge collection of occult artifacts. Some things change later on that changed my opinion of him slightly but Ted had good intentions to the end. Nobody’s perfect, right?

Oh man, The Night Sitter looked good as fuck! No, I’m not talking about Amber again, I mean the movie! The cinematography was really well done, the lighting was great, and the few digital effects that were used looked solid.

When the shit hits the fan, the lighting in the house changes. There are a bunch of greens and blues and reds. Honestly the trippy lighting felt like a nod to Suspiria, or at least that era of Italian film. The film would have been good without it but the lighting really added a surreal quality to the events in the latter half of the movie.

The practical effects in this movie were fucking great. Honestly, I didn’t expect much in the way of blood and gore, so when it happened I was pretty excited. There’s some great bone breaking, a head smashing or two, and some good old fashioned disemboweling. What really made me pop, though, was the scalp removal scene. This wasn’t like Maniac where special care is taken with a knife and all that. No. This is a scalp being slowly pulled from a skull. This is the first time in a long time that practical effects have taken me off guard. Bravo.

All in all, would I recommend this movie? You’re goddamned right I would! It’s a great story with some really-well written characters. The effects are good, it’s well shot, and well acted. I can’t think of any complaints I have with this movie. I damned near guarantee you’ll have a good time with The Night Sitter. You can pick up a DVD September 17th or watch it on your favorite VOD platform right now.