Power of Grayskull: The Definitive History of He-Man & the Masters of the Universe

I have five Castle Grayskulls and four Snake Mountains sitting in my garage, waiting to be customized for my etsy shop. My love of the 1980s Masters of the Universe toyline runs so deep (please see this video for evidence), that I’ve turned that obsession into a side hustle in which other adults pay me to make their favorite childhood playsets look cooler for display. I love every minute of it. 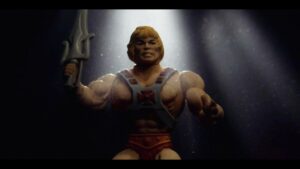 It is with this frame of mind that I entered into watching Power of Grayskull: The Definitive History of He-Man, directed by Randall Lobb and Robert McCallum. This 95 minute documentary dropped on Netflix back in 2018, beaten to the punch by an episode of Netflix’s own The Toys That Made Us featuring the He-Man toy line a few months earlier. While The Toys That Made Us episode might be best for non-fans and packs a lot of the same info into just 45 or so minutes, hardcore He-Man fanatics will be well served by the film length deep dive Power of Grayskull offers. With a DVD of the film dropping September 3rd, now seems like a good time to reevaluate it with fresh eyes. 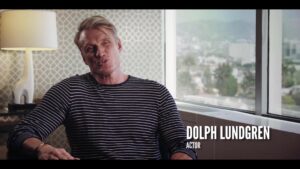 The tone of Power of Grayskull is decidedly more reverent than The Toys That Made Us He-Man episode (which leans heavily into winking nods, sexual innuendo and even stoner humor). This more melodramatic take (complete with seemingly nonstop cinematic backing score) might turn off a casual viewer, after all the creatives and toy makers themselves openly admit they were just trying to sell plastic. Still, it’s nice to see the filmmakers take the subject seriously and explore why He-Man and his arch nemesis Skeletor connected so strongly to many kids of the early 80s. 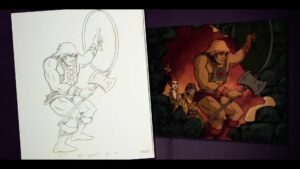 The list of interviewees is exhaustive, from the original toy designers, Mattel execs and marketing people, artists for the mini-comics included with the actions figures, voice talent and animators for the Filmation cartoon show, to the modern toy designers behind retro revivals and He-Man historians to help frame different eras of the characters. While the film wisely focuses on the magic five years Masters of the Universe ruled the kid pop-culture landscape (1982 to 1987ish), the filmmakers do a great job slowing down to examine the infamous Cannon Films live action adaptation. Not only is Dolph Lundgren (He-Man) and a very game Frank Langella (Skeletor) interviewed at length, they even manage to interview production designer William Stout, who has a deep collection of concept art for the film that’s fascinating for a hardcore fan to take a look at. It’s a nice detour and left me wanting a longer look at the making of that film. 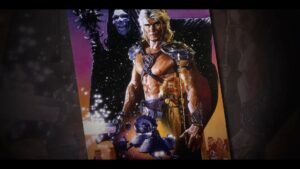 One odd thing about Power is the near omission of toy designer Roger Sweet, who is widely credited with creating the He-Man prototype that jumpstarted the toyline. Indeed, Sweet is also credited with literally giving He-Man his name, so his commentary to the Masters of the Universe narrative is missed (he’s all over The Toys That Made Us, making his absence in Power all the more confusing). However, the film more than makes up for it by going in depth with other important creators of the Masters of the Universe mythos, to include other iterations and revivals of the character over the past few decades. 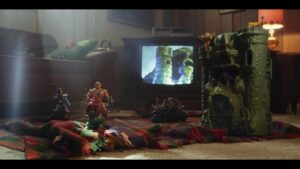 The film punches out on a somewhat dour note, underlining how every attempt to reboot the franchise since the early 80s has failed. The filmmakers (as well as the modern toymakers and creators in charge of Masters of the Universe) seem to conclude that He-Man only survives due to the nostalgia of older fans, and that perhaps reviving He-Man for new generations is a lost cause. However, the recent successful Netflix revival of He-Man sister series She-Ra seems to contradict that line of reasoning.

Power of Grayskull will be a lot of fun for fans of the franchise, and a great way to introduce a newbie to this deep universe of characters, creators and toys.

Power of Grayskull: The Definitive History of He-Man comes to DVD September 3rd.

Craig is a co host of the Half Assed Horrorcast. His writing about horror has appeared on Bloody Good Horror, Fanboy Report and other places. Find him on twitter @4colorcraig.