In the realm of survival horror films, there are two basic types of audience experiences: the fast-paced edge of seat nail-biting action type and the plodding, slow burn with a good start but a predictable reveal type. 3 Lives, a new survival-themed horror film from director Juliane Block, is more the latter type.

Emma (Mhairi Calvey), who survived a rape and saw her rapist prosecuted and sentenced to prison 15 years before the story begins, has been kidnapped and caged by a band of unknowns. To her surprise, she is rescued from captivity by her rapist. Ben (Tyron Ricketts), the convicted rapist, and his friend Jamie (Martin Kaps) free Emma and bail on their prison with the gang of unknowns in hot pursuit. From there, the story focuses primarily on Emma’s attempts to flee her captors in addition to confronting the rapist that is now apparently attempting to help her.

Add to this mix the sudden dawning that Ben might have been wrongly convicted of the rape and, as a story, 3 Lives gets more interesting. The intent seems to be to explore the trauma and drama of the unique situation in which Emma, Ben, and Jamie find themselves. They are enemies seemingly bound together by a common cause. However, because they are enemies, they cannot trust each other. This lack of trust naturally leads to webs of deceit and betrayal that weave throughout the primary arc of the trio’s attempt to escape. The premise of this film is, therefore, an intriguing one. 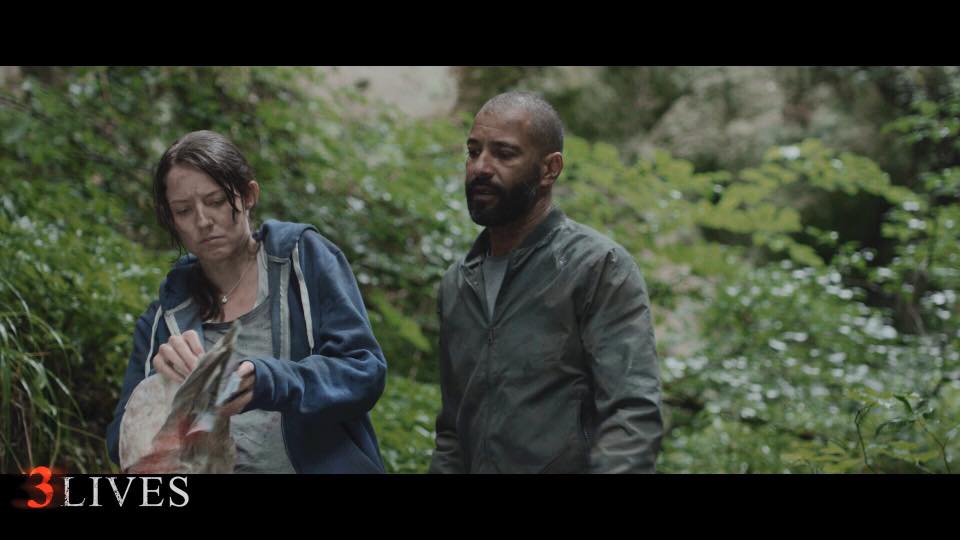 Emma (Mhairi Calvey) and Ben (Tyron Ricketts) try to survive their kidnappers…and each other in 3 LIVES.

In her director’s statement at the film’s web site, Block states that she believes “that a movie can evolve around a current socio-cultural issue while being entertaining, and commercially viable.” Watching 3 Lives, it becomes evident that she intended to demonstrate that belief. Alas, however genius the idea, this film’s execution is not on the same level. For example, the dialogue and confrontations between Emma, Ben, and Jamie often feel contrived. Although each of the characters has a unique personality and backstory, these elements are not used to the best effect when they interact with each other. Attempts by the writers to sew doubt in the minds of the audience about which character is being honest at any given point read as trite and predictable.

For other survival films that suffer similar problems, the saving grace is typically the action. This film does contain plenty of action-style confrontations in addition to the vocal ones. Unfortunately, there’s not enough intensity to the action scenes in 3 Lives to make up for the contrived feel of the argument and trust exercise scenes.

Technically, 3 Lives is wonderfully shot and directed. The natural environment in which most of the film takes place is both beautiful and treacherous, making it a perfect setting for a movie of this type. Consistency, continuity, and sound quality are also of a professional level. Overall, 3 Lives suffers from the same storytelling issue that plagues a great many filmmakers: it’s a great idea, but it does not contain enough story to fill its runtime. If the film was shortened, the dialogue was rewritten, and the action scenes intensified, 3 Lives could be a terrific socio-cultural thriller.

3 Lives is scheduled for release in early August 2019.