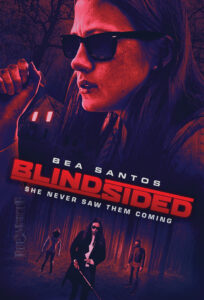 In Blindsided (formerly titled “Darker Than Night”, a better title but not by much) Sloan Carter (True Detective’s Bea Santos) is a recently blinded young woman and her father, a criminal psychologist, is leaving her in the care of her friends Mika (Slasher’s Melinda Shankar) and Toby (Scott Pilgrim’s Erik Knudsen) for the weekend. She assures him that she will be fine, she will even have a young protege of his there, named Tom (Atticus Mitchell) staying too. (For some reason) Of course everything is not fine, once Sloan “blindly” stumbles upon a body (or as Toby calls it A “Flesh Piñata”) hanging from the back porch.
If this sounds like a very thin plot, that’s because it is. There’s not much to this movie past the surface. The cast isn’t bad, and they do what they can with what they are given, but what they are given seems along the same lines as an upper tier Lifetime original.
I’m not sure whether it is due to the editing or directing, but even though this movie has some decent jokes (all of which are delivered by Toby or Tom) none of them seem to land. This movie also doesn’t have the tone to match these attempts at humor, as none of the other actors seem to be in on the jokes.
One “interesting” thing about this movie is the fact that even though every character in the movie is constantly reminding you that Sloan is blind (including Sloan herself with one of the worst lines ever, “hug me any harder and I’ll go blind…”.) The movie honestly doesn’t rely on her blindness for scares or story, which is more than you can say for most films featuring blind characters. The story may not rely on blindness but the lighting will make you feel like you are the blind one. The entire movie has some of the dimmest lighting I’ve ever seen, and uses shadows on top of that. If it’s a creative choice, the lighting crew doesn’t have enough experience to make it come across.
All in all, with decent gore effects, and an interesting, if underused Score by Norman Orenstein, Johnny Mitchell has made a passable, quick, low budget thriller that isn’t gonna blow you away but it’s enjoyable in a comforting, seen it before way.