Well, kids, last week’s episode of The Last Drive-in was indeed, the last episode. Of the season. Ahem. Unless you’ve been living on Mars, under a greasy heap of Martian ropa vieja, with your fingers in your ears, you surely heard that Shudder has renewed The Last Drive-in for a second season. We all kinda figured this would happen, especially since the live viewership had a tendency to crash Shudder’s servers and cripple poor Darcie’s twitter. So sure as shit we’ll get to wrap ourselves in the beery, beastly, boobtacular blanket that is The Last Drive-in once more in due time. Though, I gotta say, ol’ Lycra Bustier was not too impressed with the finale’s offerings. Both were movies I’d never seen, which is a plus in my book, and one starred a demented Tiny Tim in clown makeup, which is basically the only thing that that can get me off these days (thanks, RedTube). The other is prom-based, and featured legit bush, which is just lovely. But even it kinda fell flat for me. I dunno. Maybe I was too drunk. Or not drunk enough? Either way, I felt kinda ambivalent about the episode. That said, we’ll still do the usual plumbing to see if we come up with any hilarious clumps of neck hair. Sound good? Great.

Okay. Let’s get this over with, folks. Blood Harvest is about a forgettable Wisconsin gal who comes to the town of her birth only to find her childhood home vandalized and her parents missing. Then Tiny Tim shows up as Mervo, a somewhat touched-in-the-head moron dressed like a clown who spends his days mincing around town and not killing anyone. Jill, the forgettable Wisconsin gal, is then courted by Mervo’s brother, Gary. Clearly the creepy clown played by America’s favorite falsetto ukulele virtuoso is the killer, right? No. It’s Gary. Wow. Mervo kills Gary, saves Jill, and then–yep, you guessed it–in the final frames, Gary comes back to life! Do I hear sequel bells?! No, seriously, do I hear bells? [deep breath, Lycra, that edible was only 10mg]. No. No sequel bells. And somehow this movie did not reinvigorate Tiny Tim’s waning career. But hey, at least it gave us TV’s Peter Krause, who played Jill’s boyfriend, credited as…”boyfriend.” No, this was not very fun. 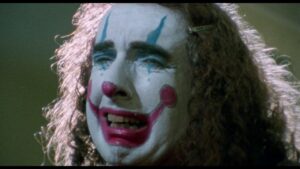 This brings us to what I’d hoped would be the pinch hitter for the episode, Hello Mary Lou – Prom Night 2. Alas and a-fucking-lack, it was not. In fact, it was slightly more disappointing than Blood Harvest insofar as there wasn’t the novelty of Tiny Tim dressed like Wayne Gacey. Heck, Michael Ironside, one of my favorite character actors ever, wasn’t enough to elevate this Canadian crapfest out of the dustbin and into the trash bin. I guess I should go over the plot…fuck me. Okay, so Mary Lou is an oversexed teenager in 1957 who is literally blown up during her crowning as prom queen because her rage-crazy boyfriend is super jelly that she was banging the crap out of some other dude moments before. We then cut to 30 years later and yadda yadda yadda Mary Lou’s ghost OR WHATEVER THE FUCK decides to come back and inhabit the virginal flesh muppet that is our protagonist, Vicki Carpenter. Fuck me, let’s speed this up. Okay, so the principal, Bill (Ironside), is actually the guy that killed Mary Lou in jealousy; Vicki/Mary Lou engages in all manner of debauchery, including playing tongue hockey with her dad, ends up being prom queen again, but is shot by the principal. Then something else happens but I was paying attention to the far more engaging ball of crumpled paper on my living room floor, until finally Mary Lou inhabits the principal and drives off with Vicki and some guy named Craig. THA. END. 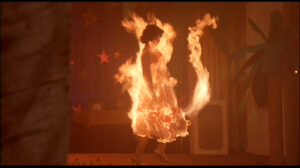 Where’s a match and a kerosene lamp when you need them?

How about some rants?

In the finale, Joe Bob waxed grumpy about two things: boutique hotels and zero tolerance policies in schools. Regarding boutique hotels, I’m right there with Señor Boberto: parfait is not breakfast; no one wants a complimentary typewriter; and a hotel room without a TV is how people end up hanging themselves with the clothes iron cord in the bathroom doorway, dick or clam in-hand, a look on their face that reads, “if only I’d been able to watch HGTV while eating a brick of fried rice then the loneliness that is typically two steps behind would not have caught up with me at this boutique hotel in Portland.” 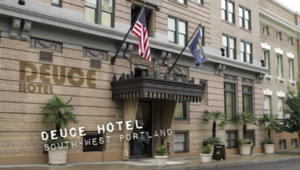 Just point me towards the nearest Hampton Inn, please.

In his other rant, Joe Bob rightly railed against how schools–especially high schools–have become, effectively, prisons. His quip about how his high school had a smoking area for students might be bullshit, but I can almost believe it. My high school experience was pretty okay until two cunts in Littleton, CO decided to murder a bunch of kids in a high school which led to the reactionary fascism of the contemporary secondary school system. Granted, school shootings are pretty fucking rampant, but rather than do anything to help the kids who might snap and go Rambo on their classmates, schools just treat every infraction like its going to lead to another Columbine. I remember in my senior year circa 2002 a fellow student–also a senior–was expelled because a school resource officer doing rounds noticed a steak knife in the back seat of her car. A steak knife. 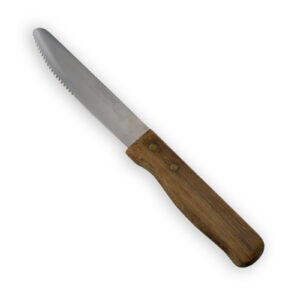 It was there because she was moving things into a storage unit for her parents and the knife fell out of a box and onto the back seat. “Sorry, kid, zero tolerance. You’re expelled. Looks like you’ll have to wait a year to go to reform school and enter college late and defer your future because some hack cop and a bunch of terrified administrators can’t tell the difference between coincidence and intent.” Meanwhile kids who actually have psychological problems are walking around unchecked, getting sadder or angrier, and never getting help. Likely they won’t become murderers, but it doesn’t matter because A STEAK KNIFE.

Fuck this, I need whiskey.

Until next time, kiddos.