In this penultimate episode of The Last Drive-In, Joe Bob tosses our way a duo of what are often referred to as “melt movies.” These are not movies for the week of stomach or anyone who has a totally reasonable aversion to melting like a pile of shredded cheddar cheese you microwaved on a plate because you came home  after drinking a scorpion bowl and two jet pilots at your local tiki bar and wanted to east cheese…just, so much cheese. But you also have some dignity and chose to avoid eating fistfuls of cold Sargento and eat a melted heap of cheese, scraped from a burning hot plate you dropped at least twice, and shoveled into your rum-soaked craw shortly before passing out on your cat. By the way, that’s the reason I’ve been lax like a Frenchman in posting these Joe Bob recaps. I’ve been eating a lot of cheese lately.

Okay, great, our buddy Bustier has been bending the pipes of binge of late, but he finally crawled from his hole, put on his best H.P. Lovecraft tee, and decided to do a write-up on what might be his favorite episode of The Last Drive-In to date. For the sake of my own sanity, I will stop referring to myself in the third person, but I might roll back into it once or twice. Tough tomatillos. This week, Joe Bob coughed up the Larry Cohen (Rest in Pieces) classic The Stuff and the extra-long student film, Street Trash. These movies, and others of their ilk, are sort of a sub-genre of body horror that feature lots of, well, melting humans. And body horror is easily my favorite stripe of the horror tapestry. Not that I have any particular issues with my gorgeous body, but mostly because it’s the one thing you have to deal with 100% of the time and when it rebels, either when you chow down on a gas station egg salad sandwich and spend the next day shitting and heaving and wishing you’d gotten the gas station turkey instead, or when you drink a mysterious rotgut hooch that turns your ankles into spaghetti and your face into a pulsating purple patch of putridity. We have to deal with this shell and we so often treat it like garbage and it rightly reminds us of the consequences. So, really, The Fly is just as much about going on a bender and feeling like hell as it is about a man slowly mutating into a fly monster. It’s about self care, people.

Okay, on to the flicks.

These movies belong together. Like cannibals and Italians. Like Forest Gump and that feather. Like goddamned Jayne Mansfield and decapitation. Aside from both being melt movies, they both involve the distribution of a foodstuff that either melts you or turns you in a yogurt zombie that eventually dissolves into a quivering mass of Chobani. Which brings me to The Stuff, one of the late Larry Cohen’s most beloved flicks. Though Joe Bob makes it no secret that he’s just not that big a fan of it, it is likely beloved for its mix of melting jackoffs and social commentary about consumerism. The Stuff centers on a yogurt-like substance that is sold by some faceless corporation to millions of Americans and marketed as a pleasantly addictive dessert. During the movie, people gleefully shove spoonfuls of this goo into their mouths and generally act like its the best things since the Arch Deluxe (I would stab a stranger for one of those, by the way). Eventually it begins to make people a little nutty and a corporate spy played by Cohen mainstay Michael Moriarty, is enlisted by competitors to find out how the stuff (heh) is made. Turns out it’s not made, but sucked up from the earth by tanker trucks as-is. We figure this out in the very first scene, when some old nincompoop putters by a vein of the stuff (heh) and just…dips his fucking bumpkin finger into it and eats it. “That’s not snow! Tasty! Tastes real good. Sweet!” 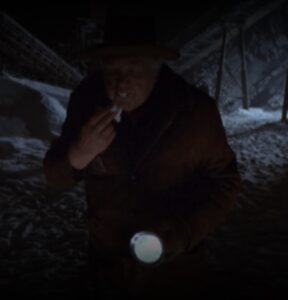 Sure, why not just eat it

Good lord Larry Cohen is a genius: the near destruction of humanity by an alien substance that tastes like angelic ice cream, dissolves people into goo, and causes poor Garret Morris (the most underrated SNL cast member ever) to explode in spectacular fashion, was just stumbled upon by an old doofus who has no qualms about eating cave yogurt. Which reminds me: I HATE YOGURT. One of Joe Bob’s issues with the flick is that while the body melts are excellent and everyone is lovingly chewing scenery, the stuff (heh) just isn’t scary. It’s white, and white things aren’t scary (okay, white goo isn’t scary). But I argue that it is scary and I would never voluntarily eat from an unlabeled tub of what looks like yogurt, the most vile substance on Earth after whatever Alex Jones is made of, and sure as hell if it became mobile and lunged after me, I’d shit my shorts. 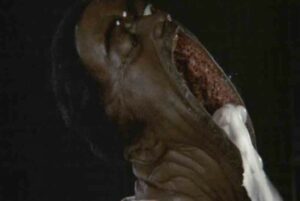 Me when I just see yogurt

The second flick is perhaps my favorite of the genre, and was introduced to me by accident through an old Videohound omnibus I found at a book sale in Gainesville, FL. I was looking for something else entirely and saw an entry for Street Trash that was described thusly: “In Brooklyn, a strange poisonous liquor is being sold cheap to bums, making them melt and explode.” Sign me the fuck up. It stars a bunch of film school kids who weren’t in much else, save for the rapey junkyard owner who was in a ton of Troma, and the totally pointless mod boss played by the guy who was the club owner in Goodfellas. You know, the one Jo Pesci glassed for asking him to pay his tab. Best movie ever made, and I will tear your guts out if you wish to fight me on this. Anyway, this rollicking portrait of the hellscape that was once Brooklyn is less a movie than it is a bunch of nonsense strung together with a handful of flimsy plots that really just get in the way of what we’re really here for: melting hobos and excellent footage of a bygone Brooklyn that makes the world of Escape from L.A. look welcoming. Basically some doughy liquor store owner finds a crate of old hooch in bottles labeled “Viper” in his basement and decides to just sell this mystery booze for a buck to the local “street trash.” The main character, if you can call him that, is a younger bum named Fred who sports a dapper purple cap right outta Jimi Hendrix’s closet and is perpetually after some cheap subs. There’s a subplot about a junkyard king/Vietnam War vet and a cop trying to get to the bottom of all the meltings, and a mafia boss who loses his girlfriend, and yadda fucking yadda. It’s all just a loose support for the following: 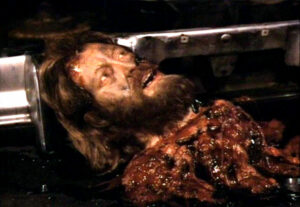 The director went on to be the steadicam operator for, among other great films, TERMINATOR FUCKING 2. Case closed: Street Trash may have crossed every conceivable line since Cannibal Holocaust, but it made possible the best movie sequel ever created.

Finally, lets address Joe Bob’s two big rants for the evening. I alluded to one before: Brooklyn. Or, simply, New York. I never lived in NY when it was its most seedy, but Joe Bob did, and he lamented the gussied-up plastic Disneyland it became after Rudy Giuliani decided that the greatest city on Earth would be better off being unaffordable to the people that made it the greatest city on Earth. He accomplished this by replacing grindhouses in Times Square with multi-level Applebee’s; making it illegal to even appear homeless; and setting up an unimaginable hell where, as a good friend who used to live in the East Village once said, “a white girl can just walk around Spanish Harlem and go from yoga to a juice bar without once fearing for her life.” Sure, NY is the safest city of its size, but that came at the expense of a place where my dad, who lived briefly in the Bowery in the 70s found out if he pretended to be retarded, no one would stab him. But he also had a great fucking time and could afford to live in Manhattan. Joe Bob points out in some fashion that all the changes Giuliani made were superficial: the window-washer bums were tossed in jail to make tourists feel safe, while he supported brutal police policies that created more distrust than it didn’t. Anyway, I don’t have much of an opinion on this, clearly.

But what I do have an opinion on is…

Mansize tissues. This might be my favorite Joe Bob rant of all time. He commits to boycotting the company that used to make man-sized tissues until they were bullied by various entities on Twitter and Instagram to drop the “mansize” prefix in favor of something less gender specific. He cites stats about how the average man is bigger than the average woman in every country on Earth, and quips about this and that, but I’m less interested his take on stats than I am the general sentiment. Women have gotten a shit deal since Ugg first realized his could crush skulls if he didn’t get his way. And at no time in the last hundred years has this inequality been more apparent. Shit still isn’t going well for women, and it’s going to be a tough battle to even get close to equality, but I don’t believe that battle includes spending the time and energy it took to spank a company into killing a 60-year old brand because it angered you. At the same time it seems women may not have access to birth control, abortions, and associated healthcare for very long and you’re worried about tissues? Yes, I get that it may be an example of institutionalized sexism and gender preference, but for the love of christ, this is the shit progressive folk do to sabotage themselves. You got angry, woman-hating conservatives pretty much lining up on all three issues they care about, while on the other side you have progressives arguing about pronouns, decolonizing breakfast cereal logos, and whether the term pet owner is offensive. We have real problems we need to fix before we can pry 10,000 years of little-dick energy from society. 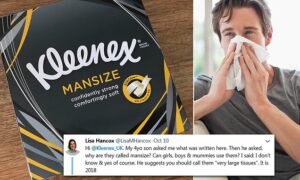 Meanwhile, the world is literally burning

Until next time, I recommend you watch these movies, avoid yogurt at ALL COSTS, and donate to Planned Parenthood. And eat cheese.