The Burning Moon is the story of all around degenerate asshole, Peter. He gets stuck watching his baby sister when he wants to be out doing crimes with his friends. So, he does the only thing a logical human being can do at that point: he does a gigantic shot of heroin and goes into his sister’s room to tell her two fucked up bedtime stories. 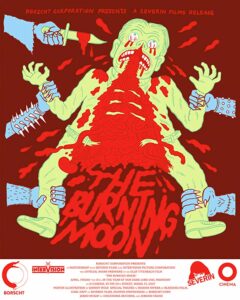 Shout out to Korey Jordan over at Thirteen Knot Productions for suggesting this film! He said it would make for a good Fucked up Friday movie and he definitely wasn’t wrong. The trailer has more gore than most people are comfortable with and, as you’d expect, that’s just the tip of the iceberg.

The Burning Moon is an anthology. The bit about Peter is the wrap around story and he tells two stories. One is about a serial killer trying to find love and the other is about a serial raping killer priest. Peter might be a complete cunt but at least he spins a good yarn. At least he’s got that.

The first story, Julia’s Love starts out in a mental hospital as a mass murderer named Cliff Parker is in the process of escaping. He kills a couple doctors, stills some clothes, and high tails it out of there for a night on the town. At some point he meets Julia. She’s young, cute, and has shit luck with guys. She figures that this smooth talking, handsome, dark-haired fella might just be the one. So they go out on a date.

Things are going great until the killer goes to grab a pack of smokes and Julia hears his description come over the radio attached to an escaped mental patient. It doesn’t take her long to put two and two together and she gets the hell right out of Dodge. In all her Dodge-leaving rush she left her wallet behind. So Cliff decides to pay her a visit. First, he has to pick up a hooker to ease a little tension. He eases his tension by lopping her head off and tossing it onto the hood a car behind him. 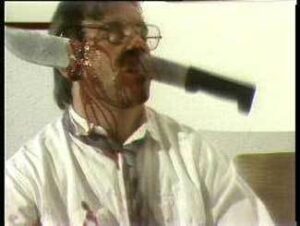 Meeting the parents is a headache

He knocks on the door and has a nice chat and a cup of hot tea with Julia’s dad and Julia joins tham, learning tha it was all a misunderstanding. No I’m kidding. He goes into that house and kills the absolute shit out of everyone he get his hands on. Fingers, hands, and heads are severed. Bodies are burned in bathtubs. Throats are slashed! It’s a hell of a time. One of the coolest kills I’ve seen in awhile happens in this story. A head explodes all over Julia’s face and she’s just laying there on the ground shaking her head and trying to keep brain goop and head bits out of her mouth. It’s fucking great.

We go back to Perter being a total fuckbag to his little sister before he launches into his second tale. The Purity starts off with a priest raping and killing a girl and then preaching her funeral. Everyone in town wants to blame this dude named Justus for whatever reason. It’s never made clear why they want to blame him but they damn sure do. He gets more death threats than a comedian on Twitter. The only person in the village who doesn’t hate him is the actual killer. It’s a bad time to be named Justus, that’s for damned sure.

After a couple more folks die bad deaths and its revealed that the priest is deep into the dark arts and using the church as a cover, the townspeople have had enough. They send somebody out to Justus’ farm to whack him. Literally. With a hammer, even, The guy ends up beating Justus to death with his bare hands. It’s pretty brutal.

The next thing you know, ol Padre de la Demon is turning Justus into some kind of magic wielding Satanic zombie bent on revenge. At this point, things were starting to drag a little bit and I looked down at my phone, answered a couple texts, looked back up and HOLY SHIT.

I looked up the middle of one of the craziest torture sequences I think I’ve ever seen. It went on forever, too. Of course, I had to rewind so I didn’t miss anything.  There was tooth drilling, gut removal, all manner of gut rearranging. Then the guy is pulled in half. It turns out that Justus’ Satanic zombie magic transports people to a really fucked up version of hell. I currently can’t think of a cooler representation of Hell in cinema. It’s that damned cool.

It was about the time that the body had split vertically in half to the ribcage when I remembered that this story was being told to a little girl. That somehow made the entire ordeal even more fucked up in retrospect. 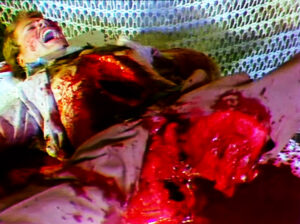 Wrapping up the Wrap-around

After a little more trippy occult shit, the second story comes to a close and we once again check in with Peter and his sister. I won’t tell you how it all ends but I will say that it’s pretty dark.

The stories were crazy as fuck and everything else is pretty much as you would expect. The acting is hit and miss but when it really counts, I think they pull it off. The gore in this is absolutely incredible.  I really enjoyed the throat slashes in this movie, they were done especially well. The guts all looked really good and when that body split in two it was fucking gnarly. I got out of this movie exactly what I wanted.

All in all, would I recommend The Burning Moon? Fuck yes I would. It wasn’t a perfect movie but it was a hell of a lot of fun and the practical effects were really cool. If you’re into gore check this shot-on-video gem out as soon as you can.