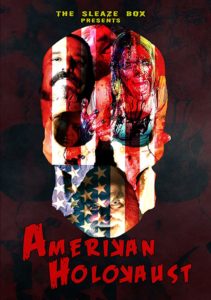 George Lucas famously addressed media and fan focus on special effects in his original Star Wars trilogy by pointing out that effects are merely a tool for storytelling. “A special effect is a tool, a means of telling a story,” he said. “A special effect without a story is a pretty boring thing.” He was right. The Lucas take on the role of special effects in science fiction can be extended to the use of violence and gore in horror movies. Without a story—a beginning, middle, and end in which viewers can see the evolution of the characters and circumstances—horror movies become repetitive, boring, frustrating, pointless, and annoying.

In Amerikan Holokaust (2013, The Sleaze Box) writer John Miller and writer/director Chris Woods have created what is basically an 80-minute rape and murder video that is completely devoid of anything resembling a story. Similar films have suffered this criticism. For example, 1978’s I Spit On Your Grave was initially reviled by both the general public and women’s groups because of the extended-length graphic rape scenes that eventually lead to the revenge story. These days, the film is a bit more celebrated as a work of feminist storytelling. The modern focus tends to be less on the misogyny and exploitation in the rape scenes and more on the strength discovered by the female protagonist as she takes revenge on those who hurt her.

Amerikan Holokaust, on the other hand, is unlikely to ever find favor like I Spit On Your Grave did. The film is a found footage-style movie that is stitched together by using video “shot by” two aging Vietnam veterans who have extreme right-wing political views. The duo rely on those views and their war experiences as excuses to commit horrific, graphically depicted acts of misogyny and violence against women who they have kidnapped and are holding as sexual slaves. For a full 75-some-odd minutes of its 80-minute run, Amerikan Holokaust primarily shows different women being forcibly stripped, screamed at, humiliated, raped, tortured, and eventually murdered by the two men. The film’s attempts at realism when depicting these assaults takes the misogyny and violence in exploitation films of the 70s to a new (and completely unnecessary) level. These scenes are intentionally disturbing, gross, and shocking. They include a significant amount of on-screen blood, shit, and gore as well as on-screen female and male genital manipulation, none of which is grounded by creating empathy for the victims. Instead, the camera often lingers on the faces of the perpetrators as they revel in these deeds, making sure we see how much satisfaction and enjoyment they derive from them.

Interestingly, and somewhat contrary to the other manifestations of violence in the movie, the filmmakers choose to use “glitches” in the VHS-style footage along with foley when they depict any fist-related or striking violence. This caused me to wonder whether they were averse to showing this particular type of violence in spite of the shocking nature of the rest of the content. Or maybe they were afraid it wouldn’t look real. After more than 70 minutes of scene after scene after scene of these two men torturing and humiliating women in different ways, it became apparent that the filmmakers were focused entirely on the “realism” of the assaults, and not at all in telling a story, delivering believable dialogue, or evoking empathy for the victims by horrifying the audience in any way beyond explicit images. If the realism of the assaults was their primary goal, they succeeded in that. If not for the awkward delivery of dialogue that gives away this film as a work of fiction, I would have been tempted to report it to law enforcement as perhaps the first ever genuine “snuff film.”

Like many other films of its stripe, Amerikan Holokaust provides a twist at the end of its run, possibly as a means of attempting to redeem everything that came before. It fails in this regard, resulting in what is finally nothing more than found footage-style torture porn. I kept looking away from the film. First, I had no interest in the film’s attempts to make its violence against women look real on-screen. It’s real enough in the real world. Second, I had no interest in seeing two hate-filled old men get their jollies from torturing people. Finally, I kept inadvertently checking the run-time to see how much longer I had to endure the lack of story.

As a fan of horror, I am not typically offended by portrayals of violence and the presence of gore on film. The genre is supposed to make you uncomfortable but, in my opinion, not only for the sake of making you uncomfortable. As a fan of art, good storytelling, and purpose, this film is offensive to me on a whole different level.