Somewhere between movies and the words on a page that line a novel lies the appeal of the comic book and its longer sibling, the graphic novel. Between their pages lie just enough visual cue to impart the scene’s atmosphere without having to spend paragraphs of type describing it. Yet, the graphic novel also relies on narrative ability and printed dialogue to move the plot along. Thus the graphic novel triggers a world-building component of the reader’s imagination that is unique in storytelling. And no genre of this particular format better accomplishes that feat than horror.

Earlier this month, filmmaker Richard Wilson of RTW Productions Inc. released a graphic novel adaptation of his acclaimed film The Halloween Girl. Based on characters that first appeared in the film and web series, Mad Shelley Comics’s Halloween Girl Vol 1: Promises to Keep follows a teen ghost, Charlotte Williams, as she conducts battle with a secret society that is known as The Hollow. In Chapter One of the graphic novel, Charlotte reconnects with her ally Poe, then rescues a trick-or-treating young boy named Bobby from some neighborhood bullies. The boy invites Charlotte home to meet his mother as a thank-you, but all is not as it seems in Bobby’s suburban abode. 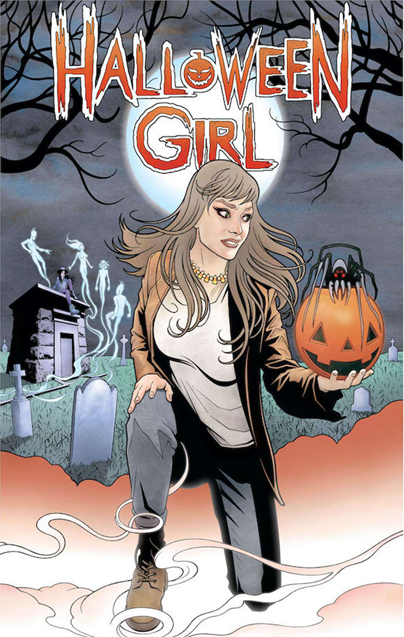 With a story by Wilson and art by Stephen Mullan, Promises to Keep drops its protagonist right in the middle of its mystery from the first page. Similar to Robert Kirkman’s The Walking Dead, which spawned the world-renown television series and its spin-offs, the interior pages of this chapter in the Halloween Girl saga are in black-and-white. The lack of color, along with Mullan’s creepy backgrounds and classic horror framing techniques, lend the story its atmosphere. As for the story, the dialogue reads natural and perfectly accompanies the art in each panel.

Readers should expect a cliffhanger-style ending because Promises to Keep is only the first chapter of a longer work. The twist, although somewhat expected, is worthy of a genre title and does leave you wondering how Charlotte, who is aptly named given the events that unfold in the story, will manage to squirm her way out of this predicament.

Issues of Halloween Girl, as well as merchandise and more information, are available at the RTW Films site.