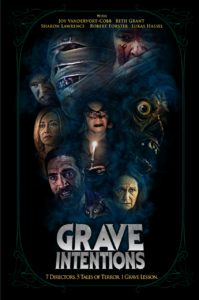 I will be honest with you, readers… I can be picky about movies in general but most especially when it comes to the horror genre.

Fortunately,  “Grave Intentions”  reeled me in from the very start by introducing a vibrant practitioner of the dark arts who immediately ensnared me into the journey of a psychological mind-fuck voodoo witchcraft inspired anthology.

This film will show you that your intentions mean everything.

From the first story (The Bridge Partner), you will see that clearly some people take what should be a casual game of bridge, way too fucking far. You may recognize the actresses, Beth Grant and Sharon Lawrence(Still as sexy in this as she was in Desperate Housewives as a stay at home mother/prostitute)

Also, some may be familiar with Robert Forster(Rest in peace) who plays the role of a husband who would obviously rather watch golf than listen to his wife’s paranoia.

It might be a confusing opening to a trippy movie but it will leave you hanging on and rethinking the next time you might want to play a game of bridge with anyone that might give off a Stepford Wife vibe.

A murderer gets his comeuppance slowly but surely as an example to all troubled teens that crime(especially murder) does not pay.

This one disturbed me the most and will no doubt come back to haunt me in my always vivid dreams. On a positive note, it will be a welcome relief from the usual traumatic dreams about my ex,

So thank you, psychological horror movie… thank you so much.

The third part of this mind trip (Violent Florence) features a young woman who enjoys chugging the dust from pixie sticks and hurting kitty cats. Im, not one that advocates violence against kitter cats, however,  the ending is worth trucking thru the cat abuse.

In the fourth installment (The Son, the Father), you are introduced to a great contender for mother of the year and the best son in the world….. I mean that in the most sarcastic way possible. It’s a joke gone too far, and the innocent suffer the most.

The last part (Marian) in Grave Intentions is hard to watch if child abuse triggers you. A young girl’s drawings hint at more than innocent childish imagination and you will come to find out that the real monsters in life are not the ones under your bed.

I give this movie a 9/10. It keeps you on the edge of your seat from the very beginning and these tales will stick with you long after you’ve finished viewing.

A dweeby and busty nerd who is trying to make her way into the writing world after selling nudes for a very long time.