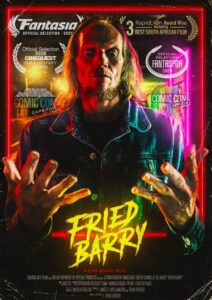 I love weird movies more than anything but there’s a fine line between weird and trash. It takes real vision and talent to create a truly weird masterpiece, without it you have convoluted hot garbage. Films like the Holy Mountain and Gozu blur reality and entrance you with their completely bonkers weirdness. Its pure art and magic. Then you have a film like Fried Barry, a film that wants so hard to be weird and trippy that it fails to even keep your interest long enough to enjoy its weirdness. Fried Barry isn’t a bad movie by any means, it’s very well made and the acting is pretty fantastic. Our title character Barry (Gary Green) looks like a methed out Paul Bettany. He is a bad husband and father, likes to chase the dragon and then gets abducted by aliens. The abduction scene plays more like Communion than Fire in The Sky so expect butt stuff and penis. After the abduction Paul Methany is returned to earth and we soon realize he is possessed by an alien being. For the remainder of the film he stumbles around, gets laid a questionable amount, escapes a mental asylum and releases children from a chainsaw wielding weirdo. Along his quest people freely give Paul Methany drugs which confirms this movie is a work of fiction. It’s at these moments one would expect hilarity to ensue but alas it never quite happens. I will say that Gary Green does a fantastic job acting as an alien possessed human and if not for him this film may have been unwatchable.

While these escapades sound awesome, the film just fails to deliver in a very entertaining package. Long boring scenes drag Paul Methany from weird situation to weird situation then it plays more like an Aphex Twin video than a movie. For the most part Fried Barry feels like a really drawn out sizzle reel for writer/director Ryan Kruger. He is obviously a ninja film maker but it just feels forced at times. On an interesting side note, childhood star Joey Cramer is also in Fried Barry. Yes, Flight of The Navigator and real life bank robber Joey Cramer. His part is so irrelevant I honestly couldn’t even tell you who he plays in the film. That’s a large part of the problem with Fried Barry, characters serve as nothing more than talking figures to show Paul Methany’s “I’m an alien in a human body” reaction. It’s frustrating because the film oozes with so much potential, it’s right on the cusp of being a fantastic and weird movie.

I’m not going to tell you not to watch Fried Barry just because it didn’t work for me. I can see how some people will love this film, giggle throughout and likely be as confused by South African accents as I was. I do have to say bravo to Shudder for giving a film like this the thumbs up. They seem like they’re not afraid to experiment and stray away from traditional horror.