If you’re like me, you are in dire need of some good news right now. Well, good people of the interwebs, I’ve got some for ya! That good news comes in the form of a new horror series called Scrawl. It won’t hit screens until next year but that just means that we’ve got something to look forward to. Let me tell you why you should start getting excited now. 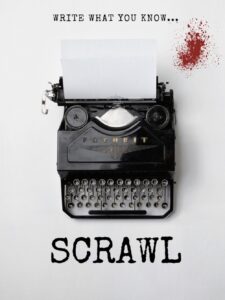 To start with, the premise behind the show sounds great. It’s based on a writer who is struggling to succeed while battling with his insecurities, mental health, and inner demons Which, honestly I kind of feel personally attacked, but I’m still totally on board. He is then offered a dangerous bargain by a mysterious stranger that will give him fame and fortune. It’s a deal that will make all of his dreams a reality but what will it do for his nightmares? The premise alone has me interested but the team attached to it has me really excited for Scrawl.

The team behind Scrawl is the same team that worked on Samaritans. If you missed that one, I highly suggest hunting it down and watching it. That film is a testament to what can be done with a handful of talented and passionate people, a weekend, a camera. Doug Bolinger, Keith Collins, and Cory Green are a fucking dream team. These dudes make magic together. From the strength of Samaritans, I am willing to bet that Scrawl will be the best indie series you’ve ever put in your eyeholes.

I’ll be keeping an eye on this one and will keep y’all updated. In the meantime, seriously, go watch Samaritans.