Three metal chicks are taking a road trip in Indiana to the Soldiers of Satan Concert. It’s 1988 and we are introduced to a crimped hair alpha, Alexis (Alexandra Daddario), Madonna with a week bladder, Val (Maddie Hasson) and newcomer to the trio, reserved Bev (Amy Forsyth).  As they drive, we listen to their banter which builds their character depth as we get a glimpse into their friendship.  What slasher movie doesn’t start out with a group of friends on a journey?

The ladies stop off at a roadside convenience store for some Jolt and Twinkies while the tv is playing televangelist Pastor Henry Butler (Johnny Knoxville) ringing the alarm against heavy metal and the satanic effects on the youth.  A newspaper Alexis picks up talks about all the ritualistic murders with satanic symbols left on the walls at the crime scene. The attendant offers the proverbial warning to the trio as they give snarky smiles. 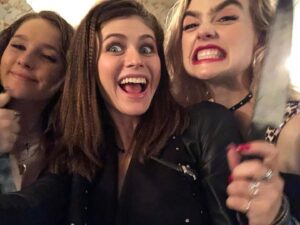 Back on the road in Alexis’ red Jeep Cherokee, a smoked-out love van tosses a chocolate shake at the windshield causing the ladies to pull off to the side.  While Val squats on the side of the road to relieve her bladder, the other two work on cleaning the shield before heading out.

When they finally arrive, they spot the van that tossed the shake, and decide to mess with the owners by tossing a firecracker inside.  Three discombobulated pot heads stumble out.  Burly Ivan (Austin Swift), goof head Kovacs (Logan Miller) and the smart quiet Mark (Keean Johnson) quickly apologize when they find out what they did and see the potential for getting laid after the concert.  Awkwardness occurs as the six converse over more tongue-in-cheek nostalgia which covers the likes of Metallica, Ozzy, to Judd Nelson (Alexis has no clue who he is?) After the concert, Ivan and Kovacs don’t want the night to end and invite the girls to continue hanging out.  Since their van didn’t seem like and appealing option Alexis invites them to her father’s house. 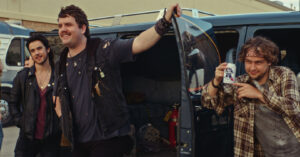 They arrive at the country estate and the guys are taken back by the wealth before heading to the back yard for a bonfire and a game of Never Have I Ever. Secrets are uncovered and the twist is revealed.  What occurs next is a slasher Manson style of toxic Christian hypocrisy that uses the mass hysteria of the ‘80s satanic panic.

Directed by Mark Myers (“My Friend Dahmer”) gets props for flipping traditional gender roles in his horror comedy.  Since I grew up during this time and was also attending metal concerts I had to laugh when they were discussing their first concert.  Just for fun I will tell you mine was The Beach Boys.  Hey, I was six and it was my surprise birthday gift.  But man did I rock my purple Hawaiian shirt and purple Kulox shorts.  I repeat, I was six years old.

The director did a nice job establishing these characters in a short amount of time and we can sense something is off with Alexis and Bev.  The three actresses played their parts well and we get a real feel of who they are right away as they snark back and forth in the car.  The two characters we are most sympathetic to are Bev and Mark as we really get a sense of their moral character and their ability to rise and persevere the madness both are thrusted into.  The movie does not really offer anything new to the genre and plays out as one would expect.  However, if you grew up during the time of metal and adults telling you your music was satanic, it’s not a bad ride.