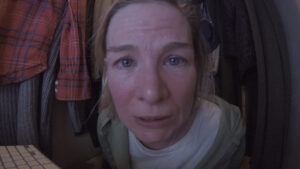 Tucia Lyman’s M.O.M. Mothers of Monsters is a film about a single mother, Abbey (Melinda Hamilton) who believes her son, Jacob (Bailey Edwards) is a psychopath and plans on shooting up his school.  Abbey creates a video journal to educate other mothers who believe their kid may be a “monster”.  Abbey has attempted to report her son in the past but with a broken system and lack of resources she uses homemade videos and surveillance cameras as evidence that her son’s mental illness is on the verge of exploding and potentially life threatening to others.

We also learn that Abbey has her own childhood family trauma that leaves her questioning her sanity and fearful that genetics maybe playing a role in her son’s behavior. The trauma has left a complicated web that has entangled this family throughout the years with a devastating impact. Abbey’s only support network is her mother who she skypes with expressing her concerns about her son regressing again. The grandmother’s jubilant behavior demonstrates an avoidance of the past and brushing things under the rug for fear of presenting in a negative light to others.  Perception is more important than the truth.

Hamilton gives a chilling performance as a desperate mother with unconditional love while battling her instincts that her son is plotting a destructive act.  As if this was not enough weight on her shoulders, she is frantically trying to suppress her own childhood trauma.  Thanks to doctors from the past, she is questioning if she is psycho somatically projecting onto her son. Viewers are left wondering who is the one on the verge of a mental break. Jacob, a 16-year-old, is bright, has friends and appears to be well liked.  However, we see destructive behavior and violent outburst by him at home and we learn that the behavior extends into other aspects of his life.  Jacob demonstrates Conduct Disorder at a very young age that is progressing along with other co-occurring disorders.  (Edwards) gives an unsettling performance as an unbalanced teenager. Even though there is a history, the point of view comes from the mom’s testimony. I questioned “how would I act if my mother reported me and I had to go through a diversion program, move a few times along with constantly having my mother put a camera in my face?” You are left wavering where your sympathy and loyalties lie. It becomes clear that Jacob is deeply disturbed as this psychological one-upmanship turns into a deadly game of cat and mouse.

Tucia Lyman wrote and directed this little gem from the mother’s perspective through found footage. The breaks in the cameras are well done and like other found footage, this plays out in a more convincing manner. There is a claustrophobic feel, not just in setting but in the relationship between the characters.  Tension implodes steadily before mother and son both violently shatter. Lyman does not hide the fact that our society usually blames the parents after a major tragedy as this movie is begging for someone to listen as a preventative measure. Many parents in our society who feel things are off with their child do not always know where to turn and when they do reach out for help, it may get filed away until after a tragedy occurs.  M.O.M Mothers of Monsters will leave you empathizing with the situation and questioning what would you do?

M.O.M Mothers of Monsters is released today on VOD and DVD.