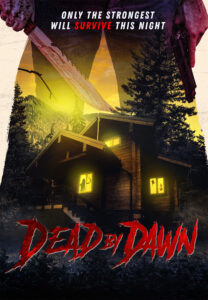 Dead by Dawn is a horror thriller, directed by Sean Cain.

A suicidal man goes to his remote cabin and is interrupted by a kidnapped woman who escapes three sadistic killers. Unable to reach the outside world for help and confined in the cabin, Daniel protects LuLu as they set traps to try and make their getaway, but will they make it through the night? 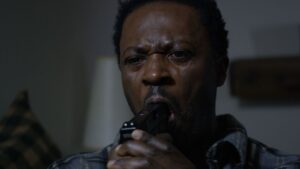 I had to take a day after watching this movie before I could write the following review. After watching the trailer for this movie, I thought there was a good premise, albite not original, but who doesn’t enjoy a good home invasion movie? The movie stars, Drew Mitchell, Kelcey Watson, Jamie Bernadette, Bo Burroughs, Timothy Muskatell and Bobby Slaski. All these actors have had their hands in other horror projects, so I thought I was in for a fun little ride. The first scene told me otherwise. I was waiting for it to break out into an armature porno. I’m not sure if it was the writing that produced over the top and bland acting by all or just flat out bad acting. The over dramatic deliveries by Neil and Snack has been seen before and was not believable, it was done better by Mickey and Mallory. Chad is a buffoon and pulled that off to the point that I was annoyed by him. LuLu is the character we should feel the deepest sympathy for as she has known nothing but perversion and abuse, however, her acting was beyond flat and boring. I was hoping Dylan’s character would be better, but I think he wasn’t given the chance for his chops to fully come through. His story line is tragic as well and instead of being able to feel empathy it is interrupted by LuLu’s constant dismissal. 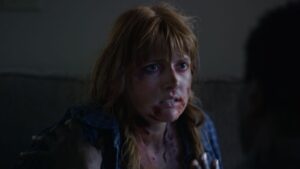 The concept is there, and it is sad to not see it play out well. On paper, we have a woman in an abusive relationship who leaves for her uncle’s Halloween party.  Only to be picked up by a perverted ride share driver. Then we meet Daniel, who is feeling such pain and loss that he wants to end his life but is interrupted when a stranger (LuLu) comes barging at his cabin door.  LuLu is all bloody and in a state of shock, Daniel does not know what happened.  Then three strangers show up at his door with a concocted story and are determined to get their hands-on LuLu, even if it means killing her and Daniel. But the surprises do not end there.  Sounds great right? Maybe you guys can be more generous than I feel with this movie. 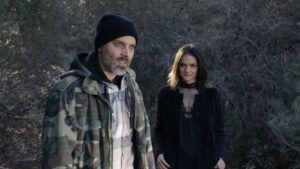 Tension builds all the way through as pieces of the character’s stories are revealed. Viewers will get two action gun fights that feel awkward in this style of a movie. Trying to be somewhat positive, LuLu has a character arc and she does come out stronger by the end of the movie. Daniel is the only redeeming male figure as all the others are asshole abusers, it is no wonder LuLu is so timid. The final show down is rewarding and the kills feel satisfying.