Fuck yeah man! It’s spooky season! The leaves are dying, days are getting shorter, and if you live somewhere that gets those things called “seasons” there’s a chill in the air.  Even your friends who don’t really watch horror flicks are gearing up to watch their favorite scary movies! Maybe best of all, haunts are starting to open all across the land. I was actually able to get out and visit Screamville Haunted Attraction on its opening weekend. So, let’s talk about it.

Screamville is a haunted corn maze. So, as you can imagine it’s a little bit off the beaten track. The big open pasture of a parking lot is located off a main road, down a narrow, country, dirt road. The really cool thing is that you’re no more than five minutes form a gas station but when you step out of your car you feel like you’re in the middle of nowhere. It’s well-lit enough to be safe but still dark enough to wonder what could really be lurking just beyond the tree line. You make your way up a dirt path under the arched sign, talk to the good folks in the booth and, if you’re cool, grab a photo with the doorman. With that, you’re in! 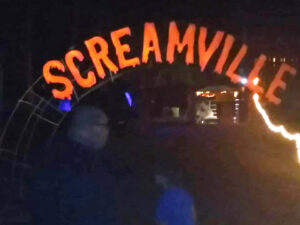 The whole vibe of the haunt really sets it apart for me. From the location to the staff, you couldn’t ask for a cooler feeling place. Everyone working the ticket booth, concession, and what have you are super nice. They’re not like customer service nice though. They’re like good Southern hospitality nice. There’s a better than even chance that you will catch the owner walking the grounds making sure everything is running smoothly and chatting with folks around the fire pit as they come out of the maze. 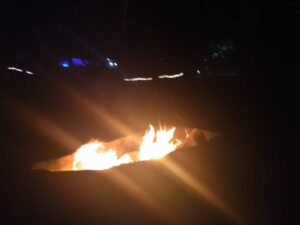 That’s right! I said fire pit. That’s another thing that lends itself nicely to the vibe. You can sit and relax around a fire with a cornfield full of fear looming just outside the fire’s light. The sound of revving chainsaws and the screams of both actors and patrons are audible but never so loud that they disrupt your conversation. It’s an impressive balance. Right up until you enter the haunt, everything feels like it is tailor made to foster a chill atmosphere and a feeling of community.

Once you’re in the haunt everything changes in a second. It’s like jumping into a cold pond on a hot day. In the indoor sections of the haunt,  great attention has been paid to detail. Every inch of each scene is optimized to be as unsettling as possible. The outdoor portions of the haunt effortlessly build a feeling of dread. The corn is tall and dense and the during the hours of operation, the fall moon hangs low over the fields. Just being in the rows, to me, is a little spooky. Then you add the props, actors, and a few more subtle touches and it’ll put just about anyone on edge.

I’m not going to talk about individual scares because I don’t want to ruin it for you. However, I will say that Screamville has amassed some great haunt actors. They have even managed to put together a group of the most terrifying children possible. Let’s be real, all kids are creepy but these kids are next level. Screamville strikes another great balance within the maze: the balance between jump scares and unsettling scenes.

One of my favorite things about this haunt is how much it plays with your mind. Some subverting expectations to toying with your perception of reality, the team has outdone themselves this year in the psychological aspect of the haunt.

The Vibe Inside the Corn

I just want to take a moment to talk about the feeling of the actual haunt.  I had to really sit down and talk it out but I finally nailed down what this haunt’s whole personality is. It feels like the haunt that a group of killables wonder into at the beginning of a movie. It’s a down-to-earth haunt in what feels like the middle of nowhere and the theme (which we’ll get to) is a little darker than you might expect from a haunt in rural Tennessee. If you really look around you, Screamville is a place that was obviously designed and built by folks who have a love for and understanding of horror.

You’re getting more than you pay for with Screamville. Tickets are $15 and you can get a fast pass for a few dollars more. They also offer a Buried Alive casket ride that I have heard is really cool. I personally am not about to crawl my fat ass off in that casket. They are open every Friday and Saturday in October as well as Halloween night from 8pm-11pm. I’m not sure if the concession stand takes cards or not so you might want to bring some cash with you. Once you’re doe with the haunt, you can get in on some of the cool photo ops they have set up near the fire pit. 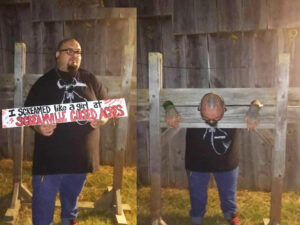 There’s a good chance that Screamville will be hosting all manner of spooky guests while you’re there. I was able to chat with the super cool folks from East Tennessee Ghost Seekers. There will be all kind of cool guests and events throughout the month, so be sure to check their Facebook page for details.

My group took between twenty and thirty minutes to get through the haunt. From start to finish it was well-crafted scare after well-crafted scare. I’m pretty desensitized and this haunt got a few real screams out of me.

I highly recommend this haunt. If you’re in the East Tennessee area in the month of October, you should definitely make your way out to Screamville.

If you would like to check out this haunt during the day time and donate to a good cause, they are holding a Trick or Treat for Charity on October 27th from 1-5pm. Me and mine will be there so come on out and say hi and donate to a great cause! 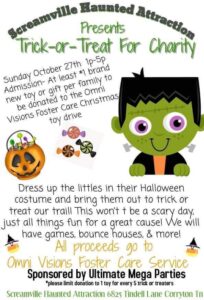