Eli (pronounced like Ellie) and her younger sister Sam thought that life couldn’t get any worse after their father left them in the care of their alcoholic, unbalanced, and abusive mother.  Then they were forced to move to their deceased grandfather’s house. A possible haunting, family secrets, and a cannibalistic clown named Crepitus threaten to show them just how wrong they were.

I’m not going to lie, when I heard about this movie months ago I was instantly excited. Seriously, it’s Bill Moseley playing a supernatural killer clown. I was pretty sure you couldn’t go wrong with that. I have been waiting months to see how batshit crazy Moseley would get once you put some clown paint on him. Finally, I was able to sit down and watch what I knew would be one badass ride. 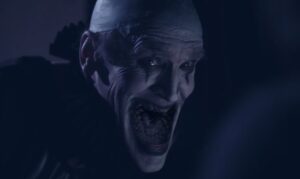 What I Liked About Crepitus

Despite how I felt after watching the film, there were some really cool elements in place. For one, Bill Moseley as the titular cannibal clown did not disappoint. He was creepy as all hell. Even with short amount of time he had on screen, he was by far the most entertaining thing about Crepitus. The overall story was incredible as well. Basically this entity takes a woman, impregnates her twice, and forces her to raise his daughters. When the girls are old enough he kills the mother, takes the older of his daughters as a concubine, and eats the younger sibling. The cycle repeats over and over again in order to keep Crepitus immortal. 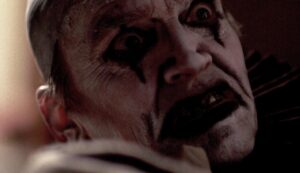 It seems like Bill Moseley was born to play a villain. His best characters are evil. This incestuous, cannibalistic, demonic clown seems like the perfect fit for him. With the combination of those two elements alone, this movie could have gone in several different directions and been able to tell one hell of a story. The problem is, the film didn’t go in any of those directions. I think that’s why I’m so disappointed.

Okay, let’s start up top. From literally the opening frames of the movie this entity, Crepitus, is introduced as some kind of boogeyman of old. It has a folklore kind of vibe to it. Which is awesome, I dig folklore.  The problem here is that this is only hinted at a couple times during the film. It’s never really discussed. Where did this demon come from? How long has it been breeding and killing? We do learn that he must consume a child every ten years while the moon is full in order to continue to be immortal. We also found out that that child had to be ten years old as well. Combine that with the fact that he only eats his daughters and each “mate” only has two kids and things start to unravel pretty quickly.

Creptius did carve Xs into the heads of all of his women and girls. Kind of like a cattle rancher branding his herd but with a little nod to the Manson Family. So that was pretty cool, I guess. It adds another layer of evil to the character and his actions but that layer goes nowhere. It’s explained by a couple lines of a creepy nursery rhyme in the opening scenes of the film and no one really comments on them ever.

Film is a visual medium, I don’t want the movie to tell me everything I want it to show me things. Going into this movie, I didn’t expect Dead Alive levels of gore (though it would have been a welcome change) but I did expect some blood, guts, and violence.  I guess I got some of that. There was a little bit of blood and some, I guess, cannibalism. Most of the action was off screen or in a pitch black room with only sounds; sometimes it was just shown in split second flashes of light which, to me, is worse than not showing it at all. I understand that sometimes what the mind conjures up is more horrifying than what you see on screen. Classic films like Psycho, Texas Chain Saw Massacre, and Rosemary’s Baby did this to great effect. Rosemary’s Baby, this is not.

Crepitus is very dialog-heavy. This movie is full of expository dialog that really doesn’t do much to explain anything. This would be fine if the conversations  were gripping; like all of those “talking in dark rooms” scenes in Game of Thrones. That was not the case, though. As a matter of fact, the dialog in Crepitus is just abysmal. It all felt so forced and nothing sounded like what an actual human would say. The worst part is that most of it was incredibly boring. Even Crepitus himself was only really saved by the fact that most of his lines were just creepy ass nursery rhymes and  Moseley’s performance.

While we’re on the subject of performances, let’s address that, too. I don’t really know if it was the direction or the writing that made the performances come off so poorly but I suspect it was a combination of both. See, I refuse to believe that the cast of this movie are that bad. Three out of four of them are veteran actors. Hell, Chalet Lizette Brannan, who plays the younger sister Sam has an impressive IMDb. Seriously, check it out. Also, she was 12 when this movie was filmed, beating Linda Blaire’s record for being the youngest female lead in an R-rated horror film. I also want to add that despite the dialog, Caitlin Williams gave a solid performance in her film debut. The cast is pretty solid.

Furthermore, when they aren’t speaking they do really well. It’s just when that wooden dialog comes back into play that things go downhill again.

Honestly, I think Eve Mauro gave the best performance in this film. She played the absolutely batshit insane mother. The problem there is that I hated her character so much. That opens up a whole new can of worms, though.

Y’all Ready for some Comparisons?

I couldn’t help but draw some comparisons while watching Crepitus. For one, the mother had some heavy elements of Baby Firefly. When she wasn’t hurling physical or emotional abuse at her daughters she was either doubled over laughing like a loon or walking the line between threatening and sexual. I actually think she plays the part of Baby better than Sherri Moon Zombie. If I’m being completely honest, she looks better doing it, too. Baby is nails on a chalkboard to me and the mother here is a little less annoying but the similarities are definitely there.

While we’re making the Rob Zombie comparisons; do you remember his remake of Halloween? For almost the entire first act of that movie you’re trapped with this drunk, barely literate, screaming redneck family. It quickly goes from uncomfortable to grating on the nerves. That’s this whole fucking movie. Sure there are breaks but that usually entails listening to more dialog between Sam and Eli then it’s back to the drunk trailer-park harpy routine from mom. I could gather that she was a monster without having to see child abuse for the sake of shock for an hour.

All in all, would I recommend this film? Not really. If you’re a fan of Bill Moseley, you could check it out just for his character. He doesn’t get much screen time but he is pretty great in this flick. There are even a few cool visuals thrown in every now and then. You may want to check this out because I feel like it will get some coverage within the horror community. I think that Crepitus could possibly be the Death House of 2019.