If there’s one thing viewers should expect from the Greg Nicotero-helmed Creepshow series currently streaming on Shudder, it’s creatures, gore, and comeuppance. Creepshow wouldn’t be Creepshow without them. The Season 1 finale, which became available on the streaming network just in time for Halloween, mixes all three ingredients. It adds a dash of abuse and a helping of vanity and brings everything to a boil in a witches brew that features Roxanne Benjamin’s return to the Creepshow director’s chair. There are also alums from the Stephen King/George Romero 1982 Creepshow in Tom Savini and Joe Hill, a director/writer combination to tickle the taste buds.

The Benjamin-directed segment, “Skincrawlers,” is a classic Creepshow and Tales From The Crypt-style combination of motivation and caution. It was team-written by Paul Dini (Batman: The Animated Series) and Stephen Langford. A media-friendly health supplement “doctor” named Dr. Sloane (Chad Michael Collins) discovers a new species of slimy, ropy leeches that bear an interesting oral resemblance to the Demogorgon from Stranger Things. The leeches suck away toxic human fat, relieving all of humankind of any need to exercise or eat healthy. Sloane insists that the procedure has been thoroughly tested and is safe. But when a skeptical client—played by Dana Gould of The Simpsons and Stan Against Evil—agrees to have his fat sucked away on live television, things go awry. It just so happens that the procedure is scheduled to occur during a total eclipse. That eclipse affects the creatures (and their previous work) in unexpected ways.

Despite its unimaginative title, the “Skincrawlers” segment is my favorite of the finale. When comeuppances come about, they do so in an explosively comic book gory way that involves plenty of running, slipping, bursting apart, and other forms of hilariously horrific slapstick. Benjamin also directed the “Lydia Lane’s Better Half” segment from Episode 4, which is by far my favorite episode of the series. This segment is significantly funnier than that previous outing, which demonstrates Benjamin’s versatility in the genre. She’s previously directed a segment for the XX anthology and the Southbound anthology. I have not seen her Body at Brighton Rock feature, but now I want to. 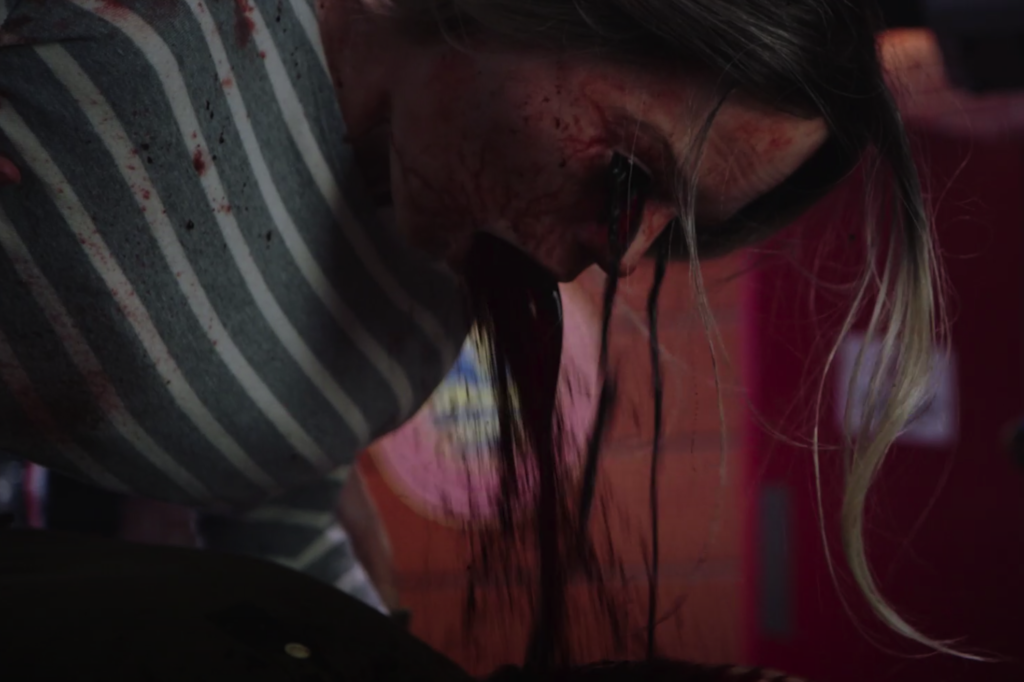 It’s not quite the binge and purge weight-loss method in ‘Creepshow’ Episode 6’s “Skincrawlers” segment.

The Tom Savini segment titled “By The Silver Water of Lake Champlain” is a somewhat loose adaptation of Hill’s story from his new Full Throttle collection. Jason Ciaramella wrote the teleplay for this segment. A teen girl named Rose (Sydney Wease), whose mother has married an abusive man following the death of Rose’s father, finds what she thinks might be the remains of lake monster Champ in the fog along the shore. Rose is ecstatic over the discovery because her father had spent much of his life attempting to prove the creature’s existence. But when abusive step-father Chet (James Devoti) realizes what’s happened, he tries to take the credit and fame for himself. This segment is a slower burn than “Skincrawlers,” and obviously not intended to be as funny, but the payoff is wonderfully Creepshow. 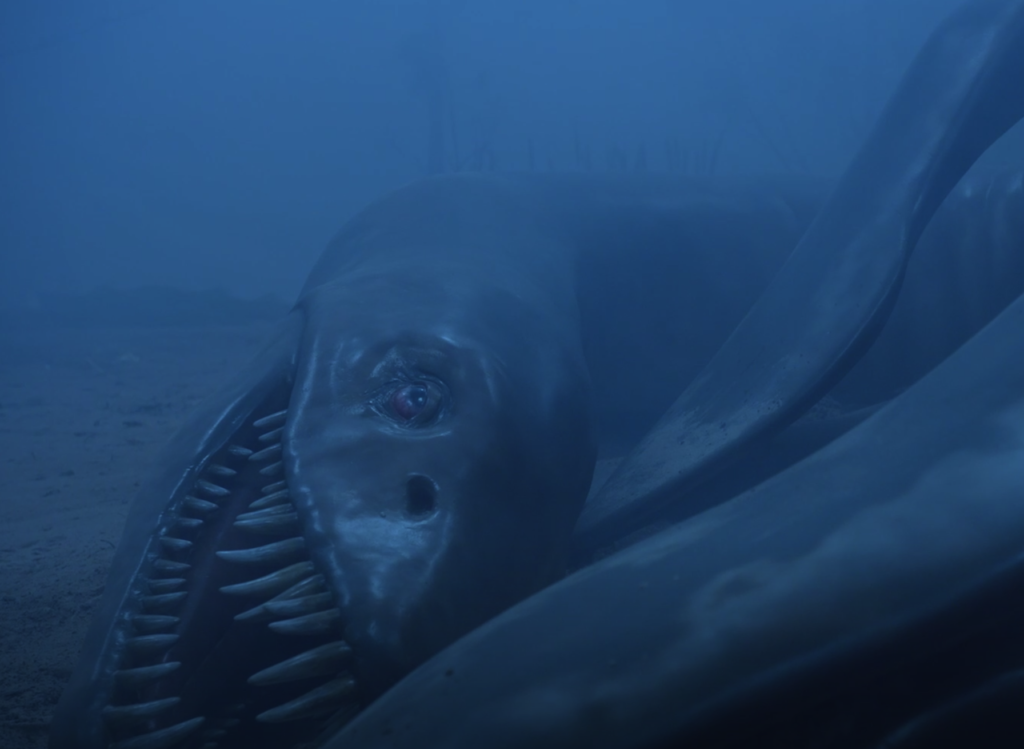 Is this the creature Rose’s father sought “By The Silver Water of Lake Champlain?”

Interestingly, this season of the series (Shudder has renewed it for a second season) wraps up on a fun historical note that might or might not have been an intentional nod to the 1982 film. Savini and Hill share a common history in that they were both directly involved with the 1982 film but in very different ways. Savini was responsible for the effects. Stephen King’s son Hill, who was somewhere around the age of 10 at the time, played the role of Billy, the kid who is aided by The Creep in getting revenge against his father (played by Tom Atkins) for taking away his horror comics. In the introduction to Full Throttle, Hill relates how Savini pretty much became his babysitter on-set, and how enchanted he was by Savini and his work. Nevermind that he’s King’s son, Hill says, it was that experience with Savini on Creepshow that kickstarted his journey into writing horror.

In the end, Episode 6 of Creepshow is a fitting finale for this first season. I remain steadfast in my opinion that The Creep needs more of an arc (and that could be either a per-episode arc or a per-season arc) if the showrunner wants to dig even further into the film franchise roots. In the 1982 film, The Creep’s arc involves Billy and his meanie father. In the 1987 sequel, an animated Billy uses his horror comics and his relationship with The Creep to fend off a gang of bullies. The lack of an arc for The Creep is my only criticism about the series as a whole. 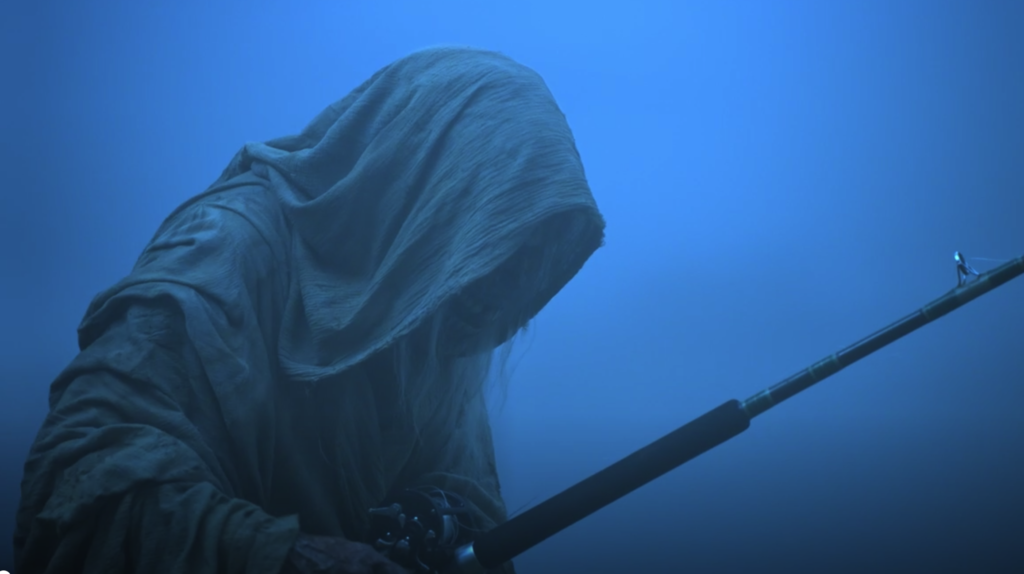 The Creep fishes your nightmares in the ‘Creepshow’ Season 1 finale

Creepshow, as a series, is a wildly fun ride through live-action interpretations of classic horror comic scenarios. Unencumbered by a single story or character arc, this series has the potential to allow its creators to experiment and enjoy themselves. I’m already looking forward to Season 2.