Sadly, Halloween is over, and we have all gained about ten pounds in candy fat and have only a couple more episodes left.  AHS: 1984 episode seven made me revisit the 1988 movie, ‘The Lady in White’, as this episode is named.  This hint in the tittle lets us know that some pissed off ghost mom in white would be terrorizing kids all due to an angered broken heart for a loss of her child that was murdered (Friday the 13th anyone?).  But who is the lady in white and how does it play into AHS?

The show begins with a flashback to 1948, when Camp Redwood was called Camp Golden Star.  We are introduced to a widow who lost her husband to the war and her two sons.  Older, antisocial, chubby son, Benjamin and Bobby the younger outgoing golden child.  The widow is Lavinia the chef at the camp (Lily Rabe who has been in past AHS seasons).  The viewers can pick up right away that Lavinia hates her job (as most do), despises her son Benjamin while adoring Bobby.  Benjamin has been tasked to watch over his brother, but Benjamin would rather spy on two campers getting it on.  No surprise, Bobby goes swimming in the lake after being told by his brother not to.  And in Sleepaway camp fashion, Bobby is killed by the propellers of two camper’s boat.  Lavinia comes running over and blames everyone for her youngest son’s death, including Benjamin.  Later that night she massacres a bunch of campers and attempts to kill her older son who cautiously enters the scene of the crime.  However, young Benjamin, protecting himself, impales his mother, killing her.

Back to present time, Donna is helping Brooke detox from the injection she used to fake her death at her execution.  Brooke is confused and is not accepting of Donna’s help.  But, after seeing Ramirez rise from the dead, Donna is convinced she has shit to face in the afterlife so it’s time to repent.  After a few days and feeling better, Brooke discovers that Margaret is throwing a music festival.  Brooke has a new lease on life and is now determined to get back to Camp Redwood so she can see Margaret die for stripping the last five years from her while missing out on the rest of the ‘80s.

Donna takes Brooke to a roller rank to relive those ‘80s feels.  While having fun to a Def Leopard montage, a sexy side burned, sunglass wearing dark hair man is watching them.  The mystery man, Bruce (Dylan McDermott) introduces himself to Brooke and Donna.  He informs them that he is also headed to the festival and could use a ride to meet up with his girlfriend.  Donna, not taking any chances with strangers (stranger danger), declines.  As the ladies leave, the camera pans onto a flyer of a number of missing women on the highway.

While out in the parking lot of the roller rank, mysteriously, Donna’s car won’t start, but have no fear because Bruce is here.  The culprit, a loose distributor cap.  Hate it when that happens just randomly on it own.  Bruce saving the day and brining up Karma, is enough to get Donna to change her mind.  Bruce assures that he just needs a ride to his girlfriend’s house, but he doesn’t know the name of the exit, just recognizes it.  He then tells a creepy pasta tale about driving on the road and headlights, you know, we have all heard this one before or been forward it by some gullible person on Facebook.  Brooke gets pissed and tells him that she has come face to face with bullies like him for the past five years and that shit is not going to work on them.  Donna pulls to the side of the road and tells him to get out, but Bruce refuses.  A squad car pulls up behind them and approaches their vehicle.  He asks the ladies if they are alright.  Donna tells the officer that she just met the guy in the back, but before the officer can do anything, Bruce shoots him and gets out of the vehicle to finish the job.  Not waiting around the ladies take off. 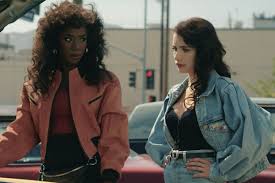 Meanwhile, Richter is back at camp and comes across the local teenagers dressed up like him that he killed a few episodes back.  Since Montana has ordered that no one be killed before the music festival, they tie Richter up and take him to her.  Richter tells Montana and the other ghost campers that he is back to kill Ramirez who has the devil on his side.  They in turn tell him their plan to kill everyone at the festival thinking it will release them from purgatory.  Richter is confused by their plan and reminds them that they are secluded from the evils of the world.  But Chet says they are not alone and are being terrorized by a woman dressed in white.  Richter informs them that it is his mother, then tells them the story of the first massacre that occurred on this land.  He ends the story with him stabbing his mother and how her blood poured into the ground along with her pain and rage and that is why everyone who is dead, is stuck there.  Richter asks to be taken to his mother.

When Richter arrives at the small cabin, his mother appears and begins taunting him with her cruel words. Richter asks if his brother is at the camp too, but his mother loses her shit.  She tells him she misses Bobby but can never find him, so she is stuck at the camp.  She continues with how she felt a vibration and followed it.  That is when she saw an older Richter carving a bear talking to Margaret at the camp in 1970.  To fuck with his life, his mother whispered into Margaret’s ear, hence the push which leads Margaret to go on her killing spree.  Lavinia tells Richter she wanted to take the one thing he cared about and use it to destroy him.  Mission accomplished.  Richter asks mommy dearest why she hates him so and she tells him because the wrong son died.  OUCH! This will either cost a lot in therapy bills or just kill a bunch of women to deal.  Richter tells his mother that he needs to end all this to save his son.  But Lavinia tells him this will never end, and she will make sure he burns in eternity so he can suffer as she does.

Next we see Donna and Brooke sitting at a red light when Bruce in the squad car, smashes into their bumper.  Bruce approaches the window and sees the two ladies passed out and says “karmas a bitch”.

Unknown time has passed, and Brooke awakens to find herself in a blue pickup truck in the middle of know where.  Bruce has a shotgun on her and gives her two options.  Either she die or she drives.  The catch is, Donna is tied to a long piece of rope, which is connected to the back of the truck.  Brooke chooses to drive but reverses it while grabbing the handgun from Bruce’s waistband and shoots him in the leg.  Out of the truck, Donna sneaks up on Bruce and wraps the rope around his neck. Bad ass Thelma and Louise, tie Bruce to a pole on the side of the road and Brooke cuts off his thumbs, so he won’t hitchhike again.  Then they make their way off into the sunset, together, to Camp Redwood.

Margaret, Trevor and Courtney are getting ready for the festival that sounds more like Fyre Festival.  One band shows up and Limahl (Misha Crosby) of the band Kajagoogoo, steps out of the tour bus.  As Margaret is belittling Trevor, he spots Montana.  Confused but delighted, Trevor follows till he is face to face with Montana again.  Looking alive for the first time in years, Trevor kisses Montana.

We then see Limahl on the side of his bus and Ramirez shows up to remind the one hit wonder (one as a solo artist but only one with his band), that he has a contract with the devil before slicing his throat and killing everyone else on the tour bus.  Leaving poor Courtney to discover the bodies in the evening.

The show ends with Richter on the dock where his brother died.  His mother shows up and is pissed that he is in her spot of morning.  Richter reminds her that she is not the only one who misses Bobby and so much so, he named his son after him.  Lavinia tells him he is in forces that are beyond him.  But Richter asks, what kind of father would he be if he did not to everything to protect his son? In an act of an olive branch, Lavinia tells him that if he dies by the hands of Ramirez, he can never come back, but if he takes his own life he will come back to the camp.  Without hesitation, Richter chooses to take his own life, an apparition of Richter appears and pulls the knife out of the body (his) laying on the dock and walks away.

Now Richter has a backstory along with the camp.  AHS is doing a good job at tying and completing story lines this season.  With only a couple more episodes left there are still some questions.  What role will Bruce the highway serial killer play?  Besides financial gain, what does Margaret hope to gain from the festival, knowing that many will be murdered?  Lastly, what purpose will the ghost play and how will they escape their purgatory.  It better not be something simple as Lavinia finding peace and releasing her spirit.  But knowing AHS, nothing is simple.  Come back next week to see what other pieces of the puzzle get put together.