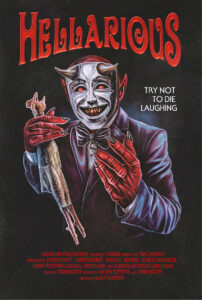 Y’all know I love some short films. They’re all the creative juices that would go into a feature film distilled down into about a half-hour or so. Even if they aren’t great, you don’t feel like you’ve wasted a huge portion of your day. The really good ones, on the other hand are the ones that you watch over and over and share with everyone you know. Whether they like it or not! With the short runtime, you don’t get all tired from keeping someone hostage in a room for an hour and a half. So it all works out. Anyway, the only problem that I’ve had with shorts is that it is hard as hell to find them in physical form. Hellarious helps to solve that problem for a handful of truly great short films.

Hellarious is a collection of seven horror-comedy shorts. There’s no wrap-around and no attempt to make all of these films fit together; it’s like you’re watching the short selections at Satan’s Film Festival. You just kick back and watch as the films roll with brief title cards in-between. I love this, though. I really think that trying to turn this collection into an anthology would only take away from the effect of the film. It’s the only one of its kind that I can think of; kind of like the short films in the collection.

Hellarious delivers all of the things you never knew that you wanted from a film. You’ll get things like passive-aggressive zombie wives, trailer park chupacabras, killer shopping carts, a guitar possessed by Satan himself, and so much more. This collection also includes the most original werewolf film you will ever see in the span or your mortal existence. This, Dead Reader is a guarantee. You’ll not find a collection of shorts like this anywhere else.  I laughed, I gasped, I cringed, I hailed the Dark Lord Satan. This film was truly an emotional rollercoaster.

I’m not going to go through every short in the film and break it down because I don’t want to spoil anything. What I will say is that this a well-curated collection. They are so equal in quality that I can really make blanket statements about the collection of as a whole. For instance, every one of these shorts has great practical effects. There is enough gore to go around, which is always nice. The performances are all great. There is no tired over-done bullshit in this collection, either. Every story is fresh and original. I would watch the feature length version of literally any of these shorts.

I can, however, easily pick my favorite out of the collection. That’s because Hellarious includes Lunch Ladies! If you don’t know about the Lunch Ladies you are missing out. We have covered that short pretty extensively here at TN Horror. If you’ve been around for awhile you know we love the Lunch Ladies (Seretta, I know you got them e-mails and voicemails… and texts and the smoke signals I’ve been sending. You can’t say you didn’t see the carrier pigeon! Don’t ghost me like this!) Seriously though, it’s an amazing short and it was writer/producer and all around gem of a human being Clarissa Jacobson who put us on to this film. So shout out to her and the Melvin High nutritional delivery team!

Would I recommend this film? You’re goddamned right I would! You can go pre-order your special edition Blu-ray from HorrorPack right now. If you don’t want to pre-order, Hellarious will be available on some VOD platforms September 17th. No matter how you rent or buy it, Hellarious is a perfect edition to your spooky season watchlist.

If you get a copy of the special edition, you will also get a bonus exclusive short film from Clarissa Jacobson called A Very Important Film. All I can say about that one is that it is incredibly important. In fact, I would go as far as to say that it is nothing short of life-changing. Cannot recommend it enough!