When I see a new grinshoue-style flick, I get excited. More than any other revival, I love seeing the heart of grindhouse come to life with new filmmakers. Sure, some of them aren’t as good as I’d hopen and others just downright suck. More often than not, though, I get exactly what I’m looking for. On the other hand, Small Town Monsters never fails to impress me. I have reviewed a couple of their documentaries and they are always on point. So, when I heard about MOMO: The Missouri Monster awhile back, I was more than ready to check it out.

What does the revival of grindhosue movies have to do with a cryptid documentary, you may ask. Solid question. The answer is that this flick is part grindhouse creature feature and part documentary. It’s a hybrid of legendary proportions!

You know how most documentaries have either archival footage or reenactments to spice things up and drive a point home? Well, in MOMO: The Missouri Monster, those reenactments are replaced with clips from a lost grindhouse creature feature! 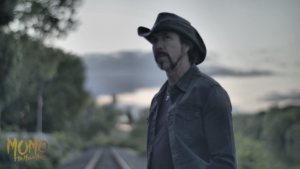 The documentary portion of the film is hosted by cryptid expert and all around badass, Lyle Blackburn. He lays out the facts of the case of MOMO, Missouri’s own three-toed stinky ape creature. To bolster the information he is delivering, there are interviews with some other knowledgeable folks, witnesses to the MOMO phenomenon and locals who lived in the small town while it was all going down.

Like other Small Town Monsters documentaries, the information presented is pretty balanced. They tell the story, and talk to folks who were there to live through it. They also talk to locals who think tha the whole thing was  horseshit. That’s what I love about STM, they don’t present an agenda. They aren’t out to change anyone’s mind. Seth Breedlove and company are out to tell these cool stories and search for the truth. They approach each subject with respect and an open mind. Their interviews never feel predatory or exploitative and I really respect that about them.

This portion of the film represents itself as a TV series where the host digs deep into the real-life stories behind horror films. If you’ve seen any of the previous releases form STM, you’ll know what to expect in the integrity and quality. This one has a little extra, though. I would go so far as to compare it to The Last Drive-In with Joe Bob Briggs.

The whole thing even starts off with a staticky analog TV set. The difference here is that instead of a walking movie encyclopedia stopping classic drive-in movies to share facts and anecdotes about the film we have a well-known cryptid expert stopping a fictional movie to talk about cryptids and do introduce interview segments.

So, the film that they are showing on the TV show is MOMO: The Missouri Monster. It’s set up as one of those lost drive-in movies that screened for a short time and disappeared from the face of the earth save for one copy. 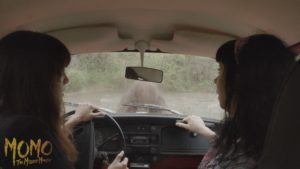 The only complaint I have about this part of the film is that there isn’t really a full-length movie out there to watch. It’s a little hokey and overall feels like an old school low-budget monster movie. There was definitely some influence taken from movies like The Legend of Boggy Creek. The performances are what you would expect from one of those old flicks too: there are like two people in the whole thing who carry the whole cast. It even looks more like a grindhouse film than most of the homage films that have come out in the past few years. I would absolutely watch the feature-length version of MOMO: The Missouri Monster.

Would I recommend this movie? Fuck yeah I would! Like everything else I’ve seen from Breedlove and company, this movie is both informative and entertaining. Small Town Monsters consistently delivers some of the best cryptid documentaries in the business and this one is no exception.

MOMO: The Missouri Monster drops September 20th but you can pre-order your copy now from the Small Town Monsters site. If you do, you might even get it a few days early.