Vance Capley and company have released Visual Comics’ Monster Magazine Issue 6. It is a 120-page issue that has been subtitled “The Kolchak Issue,” because the primary features are all about the 1974 television series Kolchak: The Night Stalker.

Things kick off with a Jack Grinnage interview. Grinnage played Ron Updyke in Kolchak. He  also appeared in The Twilight Zone, the Elvis Presley film King Creole, and the James Dean film Rebel Without a Cause. His latest role is that of “Very Old Husband” in a 2018 episode of The Kids Are Alright. From there, writer David Walker lists his three scariest Night Stalkers, and follows that with a brief piece about the strangest line in a Kolchak episode.

Next, Capley interviews the Horror Host of the Month, The Unusual Stranger, after which we are treated to a new Capley comic. 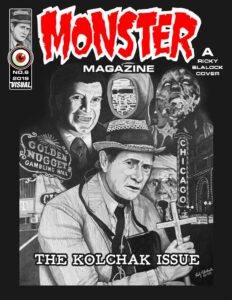 Something new in this issue of Monster Magazine appears to be variant covers. There’s a black-and-white Kolchak cover by Monster Magazine regular Ricky Blalock. There’s also Marvel Comics-style cover by Sterling Clark and a bloodier, more horror-themed cover by Capley himself.

More information about Monster Magazine can be found at Vance Capley’s place on the web. the magazine itself can be purchased from Lulu and IndyPlanet.