IS GOING BACK TO THE BARD!

Lloyd Kaufman (President of Troma Entertainment and Creator of The Toxic Avenger) recently announced via social media that picture is almost locked on his latest Tro-masterpiece, SHAKESPEARE’S SHITSTORM! 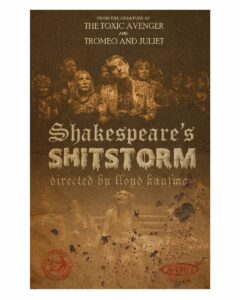 This is fan-TOXIC news for the legions of Troma fans worldwide! And if you know anything about Troma, then you know that the fans are what really makes Troma tick. They’re what keeps the goo oozin’ and the good bits jigglin’. Without the fans, there is no Troma.

And it’s obvious to anyone within earshot that our dear Uncle Lloydie knows this too.

Via his personal Instagram and Twitter, Lloyd made sure the fans were involved throughout every step of the filmmaking process.  He went “live” from read-throughs (performed with an audience at UCB in Hell’s Kitchen) and rewrite sessions from the Troma offices in Queens.  He encouraged the cast and crew to share their experience and pictures from set via their own social media outlets.  He interviewed the Production Designer (Yuki Nakamura, Production Designer for The Last Drive-In with Joe Bob Briggs) while key set-pieces were being built; and in true Troma fashion he shared some of challenges the Troma Team faces when they “Make some Art!”

Seriously, search through his stories and you’ll find footage of grown men in diapers cleaning the set after a minor fire (Rule #1: Safety to Humans).

Since filming wrapped, Lloyd has continued to keep the fans looped in and engaged by sharing completed scenes, asking for input on jokes and gags, and by constantly promoting focus groups where viewers are encouraged to help shape the film by providing invaluable feedback (possibly your last chance to catch one of these focus groups will be this weekend on 6/29/19 at DarkXFest in Ohio…See the movie early! Get your voice heard! Be part of the process!).   Find out more here: darkxfest

And while you wait for the finished film, take some time to immerse yourself in all things Troma.  First, follow @tromateam and @lloydkaufman on IG and Twitter for all the latest news, then immediately check out the teaser trailer for Shakespeare’s Shitstorm and while you’re on YouTube, head on over to Tromamovies and watch the entire first 40 years of the Troma catalogue for FREE!

Once you’ve done all that, don’t forget to subscribe to Watch.Troma.com !  With new and exclusive content added all the time,  it’ll be the best 5 bucks a month you ever spend, and if not…well, you’ve done more regrettable things than support truly independent art with your money and we all know it.

Get your slickers and rubber boots ready y’all.  There’s a Shitstorm a-brewin’!

Coming soon, from Troma (of course).