Room for Rent tells the story of Joyce, a lonely widow who lives alone with her cat. Starved for human interaction, Joyce decides to rent one of the rooms in her home. Things take a dark turn when she becomes obsessed with one of her tenants.

I didn’t know what to expect from this movie but Lin Shaye is always good, so I decided to give it a chance. Let me tell you something, Shaye might have been a little spooky in the Insidious films but she’s downright fucking creepy as Joyce. 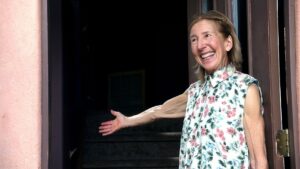 She hasn’t even gone full on crazy lady yet!

Room for Rent opens with some really nice drone shots that lead to seeing Joyce being a sad old lady. Life just sucks for her. Almost everyone she interacts with is kind of a dick to her. From the cute cashier at the store where she buys her cat food to the local youth, people just seem to think they can shit on Joyce at will.

Get off My Fucking Lawn!!

Speaking of the local youth, when she decides to go to the skate park to watch the youngins skate, she is aggressively sexually harassed by some douchebag teens. She throws one of their skateboards in the trash and walks off. Later she’s cornered and assaulted by the same kids. This kid pins her against a wall and basically threatens to rape her or have his pals do it. He even looks under her dress. It’s pretty fucked. Joyce finally snaps and grabs the kid by his face and kisses him hard. He freaks out and slaps her and she rains down some flat handed blows of her own before having a well-deserved breakdown. This little subplot kind of shows how hard her life is and may even pusher her closer to the edge and will come back around later in the plot.

Joyce discovers the strangeness that is AirBNB while at the library. Once she discovers that BnB means bed and breakfast and isn’t, in fact, some strange consonantless word she had bever seen before she decides that is the answer.

She has a big, beautiful, empty home with plenty of rooms to rent out. Joyce just knows that she will be able to make new friends and maybe even meet a new man.

Her first tenants are Sarah and her asshole husband Edward. Sarah and Joyce really hit it off but hubby doesn’t like the house, doesn’t like the room, and gets fed up with Joyce’s shit pretty quickly. All of these are pretty fair, but he’s a prick to both Sarah and Joyce. Before they can leave Sarah and Joyce take a walk and have a pretty deep conversation. Joyce bluntly tells Sarah that her husband is an asshole and she can do better. Ed comes back and demands that Sarah pack her shit up because they’re going to a hotel in town. 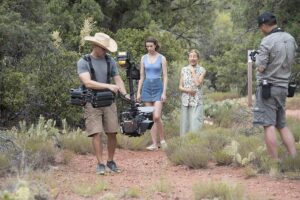 A BTS shot of Joyce and Sarah on their walk

Later on, Joyce gets a letter from Sarah thanking her for her kindness and her advice. She finally got rid of Ed the asshole and is moving on with her life.

Her next tenant is a mysterious fellow named Bob. He’s tall, dark, handsome, and in his thirties. Joyce seems to him like a slightly overbearing and nosey landlady. The audience watches her blur the lines between motherly and a sexually charged stalker. She is full-on obsessed with Bob. She goes through his stuff, sniffs his sheets, and even puts his toothbrush in her mouth. It’s gross, disturbing, and I love it. 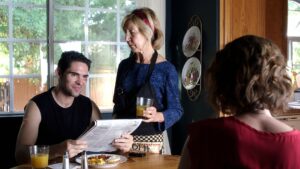 Can you blame her tho?

Joyce is a lady who loves her romance novels and there are a few scenes where she’s mentally relating her relationship with Bob to the relationship in the book. Outwardly, she goes between mildly flirty and motherly. Bob remains clueless. 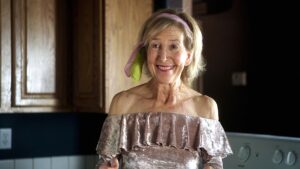 Their romantic link becomes stronger in Joyce’s mind when the kids from earlier come to pelt her house with eggs and yell at her some more. Instead of a frail-looking older lady, a big beefy fella with a mean streak comes out of the house and absolutely wrecks those little shits. I mean, Bob beats one of those kids like he’s a grown ass man complete with a couple good hard kicks to the ribs. 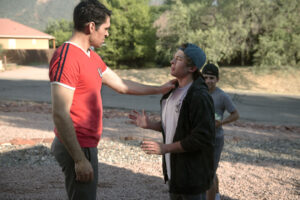 Get rekt ya little shit!

In Bob’s mind he was just doing what needed to be done. Joyce, on the other hand sees him as her hero. If she wasn’t smitten with the younger man before, she is now. So when some things happen that lead him to want to leave, Joyce is none too happy about it.

The Madness of the Landlady

Watching Joyce slowly becoming more obsessed and less sane is great. Shaye takes you on a journey into madness unlike anything I’ve seen in quite some time. Her performance is as nuanced as it is convincing. Even when she’s putting on her sweet old lady face, you can see the madness shining through. When she lashes out, though, it is incredible. I don’t want to give anything away but Joyce is a stone cold killer. Don’t fuck with Joyce.

We’re used to seeing young pretty women go mad. A man going crazy is even more common. Watching an older lady lose her mind is something rare in film. Performances like this that are subtle and almost sympathetic are damned near unheard of in movies. We need more Lin Shaye. 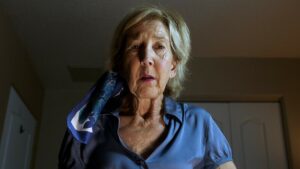 Cheese is sliding off the cracker…

While I gush about the leading lady, she doesn’t carry the film. The other main characters are fairly well-developed and the actors give goid performances. The writing is solid all the way around; it’s an interesting story with characters who are, for the most part, believable. I loved the pacing in this movie. It gets started pretty quickly and doesn’t really slow down until the end. The cinematography captures it all beautifully.

How was the Room?

While Room for Rent isn’t violent, gory, or all that shocking it is effective. The elements in the film come together to build tension that hardly ever breaks. When the tension does break it is usually due to Joyce’s cringeworthy breaches of personal space and privacy. So basically, Room to Rent fluctuates between mounting tension and cringe.  I was genuinely uncomfortable for the majority of this film.

All in all, would I recommend Room for Rent? Hell yeah I would. It’s a fairly unique story with some solid performances and suspense that is thick as good gravy. Definitely check this one out. You can check into Room for Rent on May 7th when it is released through Uncork’d Entertainment.